Trump Raid Is Part of Plan for Dictatorship
Skip to content 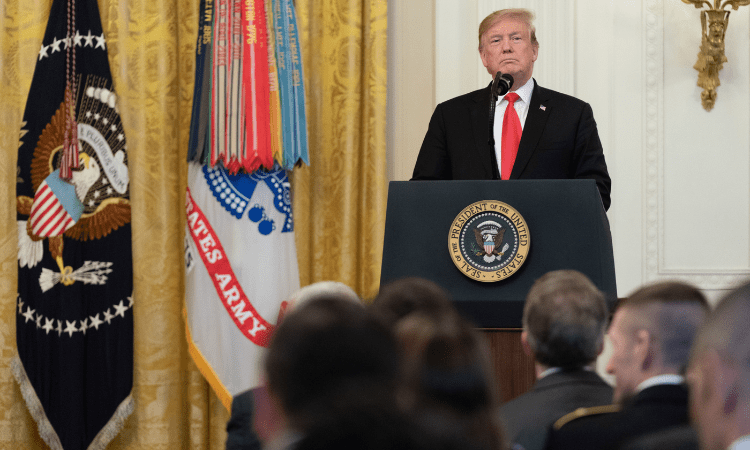 Biden regime managers and their partners have been demonizing Trump and his supporters since 2015. (Flickr)

The FBI raid on Donald Trump’s residence is part of an ongoing political agenda to impose a dictatorship on the United States. The agenda has failed temporarily with Democrats’ inability to pass their voting law and pack the Supreme Court. However, those behind the Biden regime never quit. They know they will soon lose political power, and this raid is part of their counterattack to eventually recover it.

The highly visible, unprecedented raid on the residence of a former president and leading presidential contender for 2024 had to have been approved at the highest levels of government. Knowledgeable former officials and lawyers have said it could not have happened without the approval of FBI Director Christopher Wray and Attorney General Merrick Garland.

Biden’s managers know they will lose the midterm elections and are preparing the terrain for when they do not control the elected parts of government.

Reuters reported, “A White House official said Biden was not given advance notice of the search.” The regime is lying so its media partners can deceive and confuse the public and hide the regime’s agenda of creating a dictatorship from its useful-idiot supporters.

In his signature 1971 work, Rules for Radicals, Saul Alinsky wrote, “All issues must be polarized … One acts decisively only in the conviction that all the angels are on one side and all the devils on the other.” Fifty years of this, including overt efforts during the Obama years, explains our division today.

Biden regime managers and their partners have been demonizing Trump and his supporters since 2015. People’s reactions to the raid depends on their opinion of Trump. The Alinskyite manipulators want people on both sides to react reflexively against the other side and not even consider reason.

Many commentators are saying the raid will have permanent effects. Biden regime managers and their partners want Republicans, once they have power, to do to them what they have been doing to Republicans. This would complete the cycle of politicized justice, which would mean the end of our constitutional republic.

Senator Marco Rubio (R-FL) said if we get into the cycle of “what goes around … comes around … we become Nicaragua.” With his Cuban heritage, Rubio understands, as he has demonstrated with his actions and words. Falling into this cycle is the Biden regime managers’ hope to return to power and continue their attempts to impose a dictatorship. If Americans react properly, we can defeat the totalitarian assault and preserve our democratic republic.

House Minority Leader Kevin McCarthy tweeted, “Attorney General Garland: preserve your documents and clear your calendar.” Congressional oversight is indispensable, but it should be within the larger context of how we got here, without which we cannot have a plan to reverse it.

We are the victims of a classic Marxist assault that attempts to undermine our values, divide us, and create chaos and violence as a precursor to dictatorship. We must recognize this, discuss it publicly, and detail how it has penetrated our institutions and culture during a century and peaked under Barack Obama and Joe Biden.

Marxist manipulators gained control of the Democratic Party. They have been joined by corporate elites, who own the legacy media and who have betrayed us to the Chinese Communist Party for money and power.

The third leg of the tripod of the totalitarian assault, after the Democratic Party and their corporate elites, is the administrative state: the federal bureaucracy. Both parties have created a monster that runs itself, damages our economy, seeks more power, and is unresponsive to Congress and even to its titular boss, the executive branch. Democrats partnered with the bureaucracy and the oligarchs to undermine the Trump administration and to remove its policies.

The tripod will do anything to retain power. However, our traditions and structure have held sufficiently to give us a chance to recover. After voting out the totalitarian cabal, we must (1) downsize the anti-American federal bureaucracy to its constitutional role, (2) empower education reformers at the local level, and (3) penalize getting into bed with the Chinese Communist Party.

We must stop pretending that we are in a normal political situation in which we can find common ground with our opponents. There are only two sides now: liberty, representing traditional values, and tyranny, representing no values. With sufficient awareness and traditional American grit, we can rebuild our country within the rules, the laws, and the Constitution.