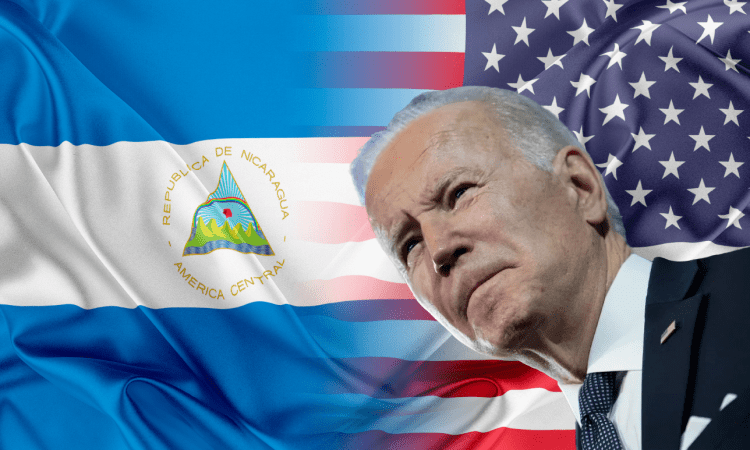 As Ortega dispenses with even the pretense of the rule of law, Joe Biden is refraining from concrete measures. (Author)

Political repression from Nicaragua’s Ortega-Murillo dictatorship has worsened since 2018, when 350 protesters were murdered by the regime. There are now 205 known political prisoners, as the regime dispenses with even the pretense of the rule of law.

The Joe Biden administration, however, is taking its time and refraining from concrete measures. In its latest empty threat, the United States announced on August 29, 2022, the possibility of halting imports from Nicaragua to pressure for political-prisoner releases.

This came in the wake of relatives denouncing the torture of political prisoners at El Chipote—the maximum-security jail in Nicaragua. Nothing has changed. The dictatorship is ignoring any threats and reinforcing repression. Moreover, it is strengthening ties with Russia, China, and Iran and destabilizing the region.

How Ortega Eliminated Any Opposition

Daniel Ortega started persecuting opponents in 2018 when Nicaraguans took to the streets to protest his regime. University students, journalists, political leaders, activists, and priests have been his main victims.

To incarcerate them, Congress—controlled by the ruling party—enacted legislation criminalizing dissent. As a result, the Ortega-Murillo dictatorship cemented its power and expanded its authoritarian scope even wider than the Chavista regime in Venezuela.

Around 900,000 Nicaraguans have fled the country so far, and half of them have arrived in the United States. The Sandinista regime has also closed more than 1,500 NGOs and repealed the operating licenses of more than a dozen universities. It has invaded and confiscated TV, radio, and other media companies and persecuted independent journalists.

On September 13, 45 countries signed a statement against the Nicaraguan dictatorship in a UN Human Rights Council meeting. It condemns systematic human-rights violations and asks the dictatorship to immediately release the political prisoners.

Nicaragua has been swiftly equipping itself with more arms since 2017. This has caused concern among neighboring nations, particularly Costa Rica, which has had no army since 1948. Of the Costa Rican population, 3 percent are Nicaraguan refugees.

Russian state TV announces that the President of Nicaragua Daniel Ortega invited Russian Armed Forces to enter his country in the second half of 2022. State TV host Olga Skabeeva said: “It’s time for Russia to roll out something powerful closer to the American city upon a hill.” pic.twitter.com/Frmc5PHuWK

In June 2022, Nicaragua’s legislative branch approved a resolution, as a matter of urgency, to expand its Russian arms, ships, and planes and allow the entrance of Russian troops. The purported goal is to enhance the fight against drug trafficking and perform humanitarian tasks. Russia, however, is hardly qualified to handle such a role, which is a ruse.

Russia has contributed to Nicaragua’s weaponry modernization for more than a decade. Russia has also included Nicaragua in the Global Navigation Satellite System and provided vaccines against COVID-19. The Sandinista dictatorship has given Russia diplomatic support in its expansionist efforts: Georgia (2008), Crimea (2014), and now Ukraine.

In a similar vein, the Ortega-Murillo dictatorship restored diplomatic relations with China in December 2021, after cutting ties with Taiwan. As part of the deal, China wants 90 percent of the exports that were going to Taiwan. The Chinese Communist Party also plans to develop infrastructure and sign a trade agreement.

In May 2022, Nicaragua and Iran signed a memorandum of understanding for cooperation. Iran will provide fuel to Nicaragua, build an oil refinery, and import meat—one of the chief Nicaraguan export products.

In November 2021, Biden signed Reinforcing Nicaragua’s Adherence to Conditions for Electoral Reform (RENACER) Act. Rather than discouraging the dictatorship, however, Ortega has intensified retaliation against opponents and enhanced ties with US geopolitical enemies.

RENACER allows the United States to apply actions, together with other countries in the region and the European Union, to discourage Nicaragua from committing antidemocratic practices. These actions include sanctions on individuals or companies associated with the regime and sanctions on the Nicaraguan economy: loans and foreign-aid restrictions and exclusion from the US trade agreement with Central America and the Dominican Republic (CAFTA-DR).

The sole economic sanction applied by Biden has been excluding Nicaragua from the preferential list of qualified countries for low-duty sugar exports in 2022–23. This will is at least some pressure on the authoritarian regime: the sugar industry accounts for about 4 percent of Nicaragua’s GDP. Moreover, 41 percent of the sugar imported to the United States in 2021 came from Nicaragua.

Excluding Nicaragua from the CAFTA-DR could reduce the Nicaraguan GDP by about 7.3 percent. Biden could execute this as a national-security measure.

Halting commercial relations between the United States and Nicaragua is a solid action against the dictatorship, because the United States is the destination for more than 60 percent of its exports. According to US data, in 2021, Nicaraguan exports reached $4.6 billion.

Despite this, the Ortega-Murillo dictatorship continues flouting US requests. This is plainly because of Biden’s idleness.

So long as the United States fails to apply concrete, firm measures, the dictatorship will look the other way and deepen ties with rogue nations. As that cooperation grows, US efforts will become, even if implemented, will have less venom. The new allies care not for the rule of law and will not pressure Ortega to halt human-rights violations. Rather, they will support regime continuity.