Three Takeaways from the Mining Conflict in Guatemala
Skip to content 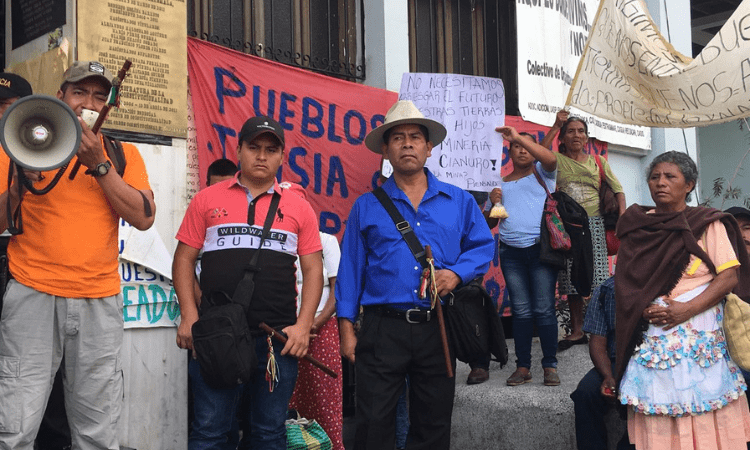 On September 18, the municipality of Asunción Mita—a Guatemalan city located on the border with El Salvador—did a consultative referendum on the local mining project Cerro Blanco. Ninety percent of voters opposed it, but officials declared the consultation illegal since the municipality defied a judicial suspension. The participation rate was 27 percent.

Cerro Blanco, a gold-and-silver open-pit mine operated by the Canadian company Bluestone Resources, is only one of several troubled projects. Some of them have been stalled for over five years in Guatemala.

While the Guatemalan Constitution (articles 121, 142) provides the state with the ownership of natural resources, the Mining Law (1997) and its Regulations (2001) set the rules for mining. The competent authority is the Mines and Energy Ministry (MEM), but miners are also subject to environmental laws and regulations issued by the Environmental and Natural Resources Ministry (MARN).

Mining companies are to request permission from the government to operate in Guatemala. There are different licenses for each stage: prospecting (six months), exploration (three years), and exploitation (25 years). However, companies must first conduct an environmental impact assessment and get an environmental license from MARN.

Getting permits and licenses takes a long time, and time is money in an already arduous sector. Bluestone Resources, for instance, requested the environmental license in 2021, which is likely to be available by the end of 2022. Then the company must request a construction license and forestry permits.

Red tape is not the sole challenge this company is facing. Bluestone Resources reported rising community protests in June 2022. In this regard, there are no official regulations on community relations and conflict resolution. Companies usually arrange non-legally binding mutually beneficial agreements.

In 1997, the Guatemalan Congress ratified the Indigenous and Tribal Peoples Convention (ILO Convention 169), which provides indigenous communities the right to prior consultation on projects that could affect them. The MEM has, therefore, the duty to set consultation mechanisms with indigenous peoples. Nevertheless, only in January 2022 officials announced they were able to offer a tried-and-tested method for consultation.

The lack of legal certainty is what makes Guatemala an unfavorable mining jurisdiction. Since 2016, Guatemalan judges have suspended at least three major mining projects due to an alleged absence of consultation with indigenous communities.

One of these projects was the Tambor gold mine, operated by Kappes, Cassiday, & Associates (KCA). The Supreme Court of Justice (SJC) suspended the Tambor mining project in 2016 due to lack of prior consultation, even after officials failed to provide KCA with a safe environment for consultation and construction.

KCA acquired the mining rights of the Guatemalan company Exmingua in 2012. The latter got a 25-year exploitation license in 2011, but community members—spurred by environmental NGOs—blocked access to the mine only one month after starting construction in 2012.

Guatemalan law-enforcement agencies ignored for years judicial orders against protesters. The Dominican Republic-Central American-United States Free Trade Agreement, signed by Guatemala, dictates the nation must provide fair and appropriate treatment to foreign investors, but it has been blatantly disregarded. As a result, KCA initiated a lawsuit for $350 million against the Guatemalan government before the International Center for Settlement of Investment Disputes in 2018. There is still no final resolution.

Other stalled projects were the silver mine Escobal operated by Pan American Silver and the Fenix nickel mine owned by the Solway Group. The SJC and the Constitutional Court decided to suspend these projects in 2017, despite the companies meeting all legal requirements and licenses.

In January 2022, the government completed the Fenix project consultation, with locals green lighting the project. Officials are now working on the Escobal mine consultation process.

In this regard, the MEM stated: “Now we have a tried-and-tested methodology that works effectively, and we will apply it to other ongoing procedures. The process in Fenix showed us it is possible to organize all involved organizations, and in a few months, achieve a consensus that goes beyond dialogues.”

Although mining currently accounts for 0.7 percent of the country’s GDP, it could increase to more than 5 percent, according to official estimations. Guatemala is rich in nonmetallic minerals such as marble, quartz, and jade, but it also has reserves of gold, silver, copper, zinc, and other metals.

Guatemala has historically produced minerals for construction, but metals started gaining prominence in the country around 2005. Despite Guatemala having one of the least mining-friendly jurisdictions in the world, metals now account for 90 percent of the country’s mining revenues.

Since most metal production is exported, Guatemala’s export inflows would increase with a more dynamic mining sector. Moreover, foreign mining companies can make significant investments in the country and create more highly paid jobs across the country, particularly in the communities where they operate.

In Peru, for example, mining benefits directly and indirectly more than 4 million people. According to the Peruvian Mining Engineers Institute, the mining industry helped reduce poverty by 30 percent from 2004 to 2018. In Guatemala, where the poverty rate is around 60 percent, mining could certainly boost economic growth and lessen the pain of poverty.

The lack of proper consultation has been the main excuse for suspending mining projects. Therefore, the MEM must make initial, no-nonsense consultations a priority.

However, to truly mitigate the risk of community confrontations, Guatemalan law enforcement and activists should understand communities as beneficiaries and stakeholders rather than as victims. A new path could be charted by creating special economic zones for mining based on local sovereignty with less bureaucracy.

Moreover, to ensure investment and growth in the mining sector, Guatemala should also establish clear rules and straightforward procedures. Legislation must consider including a one-stop scheme for licenses and permits, and establish specific roles for municipalities and stakeholders.