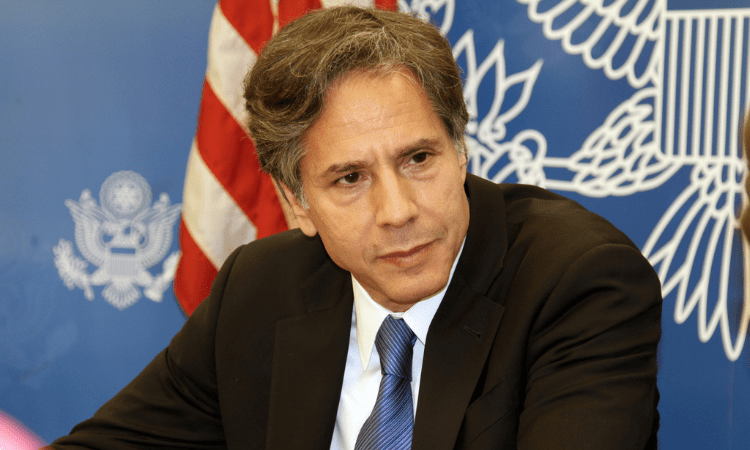 Blinken, Petro, and their collectivist allies do not acknowledge the process became antidemocratic. (US Embassy Nigeria)

US Secretary of State Antony Blinken and new Colombian President Gustavo Petro, inaugurated on August 7, jointly addressed the press in Bogotá on October 3. Blinken’s words indicated to Colombians and the rest of the world that the United States will work to impose Marxism on them and other countries.

Blinken said the United States is “committed to working with Colombia to improve civilian security … We have understood for some time—in Colombia and beyond—that we cannot combat violence by focusing only on strengthening law enforcement … We must also address the root causes of insecurity: corruption, impunity, and inequity.”

So-called equity, the bedrock of the Biden regime’s domestic policy, is code for equality of outcomes: that all people should be materially equal. This is the siren song of socialism. Using government to create material equality has led to destruction every time it has been tried because humans lack the power to change God’s creation and natural law.

Including inequity as a root cause for insecurity justifies government coercion to create material equality. This is Marxism. As noted in a May 2022 Heritage Foundation report, the US government has “explicitly endorsed Marxism as the guiding principle for foreign assistance.”

Totalitarianism is built on lies. For example, Blinken’s mention of impunity as a root cause of insecurity is true to some degree, almost by definition. However, his own regime enjoys impunity and uses the talking point as a ploy for more intervention. The US Justice Department covers for Joe Biden’s demonstrated foreign influence peddling. Blinken’s words should worry Colombians. “Impunity,” in the Biden regime’s gobbledygook, means Blinken will not criticize Petro’s crimes.

Blinken, Petro, and their collectivist allies do not acknowledge the process became antidemocratic. Colombians rejected the agreement in a referendum on October 6, 2016, 42 days after negotiators had announced it. Among misuses of state assets to favor the agreement’s approval was the Santos administration denying sufficient time to debate it.

With more time for transparency, the no vote would have been greater and more decisive. Rejecting the will of Colombians, Santos, with Obama’s involvement, corruptly had the agreement approved by Colombia’s congress on November 30, 2016.

On October 4, Colombian Senator María Fernanda Cabal called for Defense Minister Iván Velásquez’s appearance before a joint commission. Cabal says Petro is negotiating impunity with more than 22 criminal gangs and moving toward a constitutional convention. She calls this communism, as some impunity is more equal than others to Marxists. Their strategy, practiced throughout Latin America, is to change constitutions to achieve arbitrary, centralized power—dictatorship.

When announcing Velásquez’s appointment, Petro cited his term (2014–2019) presiding over the UN-created CICIG in Guatemala. Using the commission’s diplomatic immunity and having no oversight by anybody, Velásquez engaged in egregious crimes harming the defenseless indigenous people he claimed to protect. Colombians can only expect betrayal and corruption by Velásquez, apparently a Petro characteristic.

Velásquez worked closely with former US Ambassador to Guatemala Todd Robinson, nowassistant secretary for international narcotics and law enforcement (INL). Robinson was beaming with his good friend and comrade two weeks after Velásquez became Colombia’s defense minister. Velásquez met on September 25 in Caracas with his counterpart Vladimir Padrino, who is wanted by US justice for narcotrafficking.

It is at best inappropriate for the State Department’s chief counternarcotics official to be close to a corrupt Colombian working with a Venezuelan accused of narcotrafficking. Maduro’s regime keeps itself in power through revenue from illegal drugs. This does not bother Biden, whose special advisor for Latin America, Juan Gonzalez, went to Caracas this year to plead with Maduro, also wanted by US justice, for more oil.

It seems Blinken’s and Petro’s purported commitment to fighting narcotrafficking is hollow demagoguery. The same applies to climate change, which both emphasized in their press encounter. No logical explanation exists for the Biden regime’s attack on domestic energy. It uses climate change as cover to destroy our economy.

The Earth’s climate has never stopped changing, and whether human activity causes global warming remains up for debate. Even if it does, attacking fossil fuels only brings destruction because clean energy cannot provide for our needs, unless it is nuclear, which Biden and the climate alarmists reject. There are practical ways to deal with warming that are not destructive.

As with inequity, Blinken invokes climate change to justify increased government coercion. He and Petro promote the idea that climate change is a key cause of migration. Whatever remote connection might exist there, the pair just want people on the road to serfdom.

Cabal says communism breaks peoples’ legs and then gives them crutches. The new Colombian government has been weakening institutions and creating discontent to produce an uprising. It wants to change the constitution and impose collectivism that will extinguish individual liberty.

Cabal’s insights and warning to her people coincide with what is happening to the United States itself. Besides trying to destroy our constitutional republic, the Biden regime—in the name of democracy—is exporting its totalitarianism to other countries.