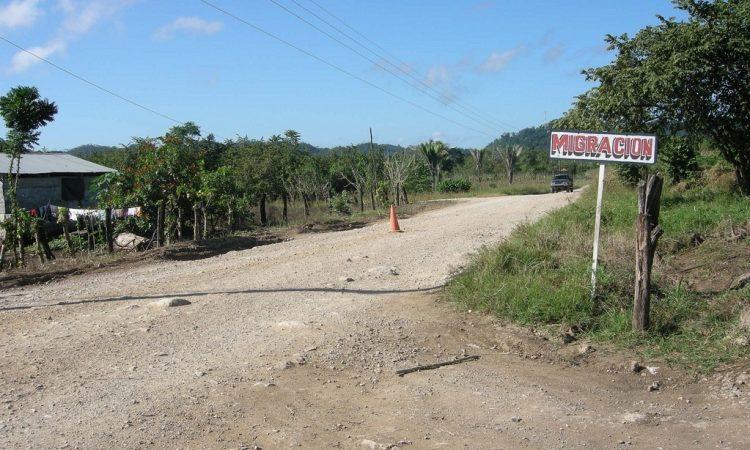 At times, one cannot tell whether he is in Mexico or Guatemala, so open is the border. (einalem)

The Trump administration’s temporary travel ban on seven Middle Eastern countries, pending proper vetting, means people intent on doing us harm will look for another way into the United States. That route is already well established: through Guatemala to Mexico to the United States.

Guatemala shares a 595-mile, almost non-existent border with Mexico with countless crossing points. Mexican authorities are unable to stop the flow of illegals through their country, and recent news reports note Guatemala is a gateway for illegal immigrants from not only other Central American countries, but from Africa, Asia, and the Middle East.

The border is porous because Guatemalan authorities do not enforce their laws in the interior of their country. Rural areas, especially near the Mexican border, are ruled by armed gangs, successors of the Castro-supported subversives from Guatemala’s 36-year armed conflict that formally ended in 1996.

During their eight-year tenure, the Obama administration embraced and protected the gangs through their control of a UN anti-impunity commission and the Justice Ministry, which Obama also used to impose his allies and policies on the three branches of Guatemala’s government. The Obama administration viewed the former guerrilla organizations as human-rights groups — an ironic tribute to George Orwell.

The Alliance for Prosperity, passed by the US Congress, calls for an investment of $750 million yearly for five years to improve security, strengthen institutions, and improve the economies of the countries of the Northern Triangle: El Salvador, Guatemala, and Honduras. According to the Council for Foreign Relations, Northern Triangle nations consistently rank as the most violent in the world. They estimate that 10 percent of the Northern Triangle populations have fled the lawlessness in recent decades, mostly to the United States.

Guatemala is the key Northern Triangle country for US interests, because of its long border with Mexico. Now the Trump administration can do what Obama’s would not: properly apply the terms of the Alliance for Prosperity, bring the rule of law to Guatemala, and create a real border with Mexico.

The United States is fortunate to now have General John Kelly as Secretary of Homeland Security. The former commander of the US Southern Command is very knowledgeable about the region. Understanding the dynamics of Central America, Kelly told Congress that “95 percent of [his] efforts are not military. It’s economic development.” He went on to say he is a champion of the Alliance for Prosperity that calls for law and order in Central America and for strengthening institutions.

Bloomberg also reported that “Kelly acknowledged that the flow of people from Central America to the U.S. is driven partly by … violence … and he said ‘a wall by itself will not work.’”

Secretary Kelly recently estimated that the wall will take about two years to construct. During that time, the Trump administration has an opportunity to immediately and significantly reduce illegal immigration without spending any more money than has already been approved by Congress.

The Trump administration should insist the Guatemalan government comply with the conditions of the Alliance for Prosperity. That means enforcing the law and confronting violence. Guatemala has elite security forces capable of rooting out criminal groups that terrorize rural populations, but the Obama administration has sidelined them for this purpose.

Todd Robinson, the US ambassador to Guatemala, has been a key implementer of the Obama agenda and is unfortunately still in his post. Robinson has been vigorously promoting constitutional “reforms” that would perpetuate the Obama agenda in Guatemala for years to come. The Trump administration should immediately relieve Robinson and remove the specter of US reprisals for non-cooperative members of Guatemala’s Congress. They are now under pressure from Robinson to support the very constitutional “reforms” that undermine the possibility of rule of law in Guatemala.

Rule of law would permit businesses in the rural areas to resume after being blocked for eight years. Investment there would become attractive again, especially for projects under the alliance that require private-sector participation. The resulting economic and security improvements would greatly benefit local people and businesses, giving them an incentive to remain in their areas.

Trust in government is crucial for security and the border. Authorities could count on a population grateful to their rescuers, who would then help identify foreigners illegally transiting their territories, effectively closing a main route north. This policy would also result in the creation of a development model for other Latin American countries, which would in turn promote friendlier neighbors to the United States.

US security officials are prudent to better screen individuals traveling from nations compromised by terrorism, but we also need to lock the backdoor. That means stopping bad actors from circumventing security screening by entering via a lawless Guatemala. Fortunately, this is something the new Trump administration can accomplish.