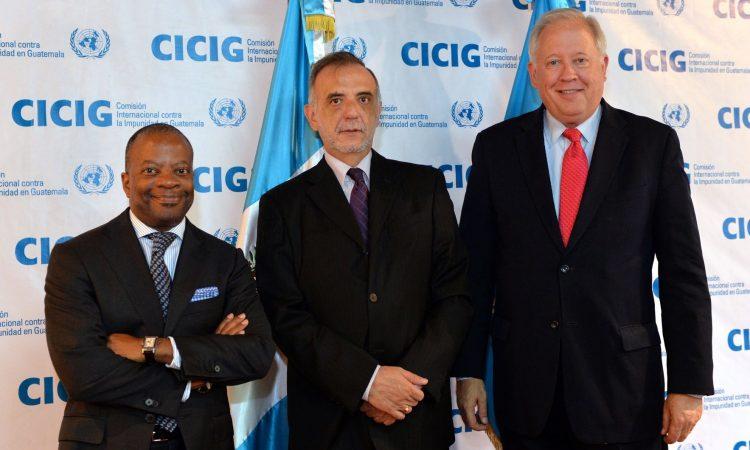 US Ambassador Todd Robinson (left) and Acting Secretary of State Thomas Shannon (right) give their support and US taxpayer dollars to Commissioner Iván Velásquez (center) of the UN Commission Against Impunity, the CICIG. (US Embassy Guatemala)

Donald Trump has taken office, but Barack Obama’s agenda continues at a blistering pace in Guatemala. The US ambassador there is leading the charge to pass constitutional reforms that empower anti-American collectivists.

Todd Robinson avoids Trump’s demand that all politically appointed ambassadors resign immediately, since he is a career diplomat — even though he has aggressively carried out Obama’s policies.

Former secretaries of state, John Kerry and Hillary Clinton, also executed Obama’s plans and sided with the successors to Guatemalan guerrillas, who have failed militarily and electorally. These groups still dominate a lawless countryside, with the knowledge and protection of Robinson, and permit illegal immigrants to pass into Mexico en route to the United States.

As long as there is no rule of law in rural Guatemala, efforts to reduce illegal immigration will come to naught, and US aid will be squandered.

Robinson and allies failed to halt Guatemala’s 2015 elections, as they sought to insert hand-picked collectivists into power. He and then-Vice President Joe Biden instead used billions of taxpayer dollars as leverage to subvert Guatemala’s three branches of government.

They managed this by pressuring for an extension of the UN Commission Against Impunity in Guatemala (CICIG). The United States is the largest contributor to this partisan commission, which the Robinson faction uses to control criminal prosecution and evade due process.

Now, shaken by Hillary Clinton’s defeat, Robinson is desperate and forcing amendments to Guatemala’s constitution. These reforms would extend the reign of Obama’s allies over the judicial branch, beyond Robinson’s tenure.

If passed, Guatemala’s government would be unable to enforce the rule of law in rural areas, as stipulated by the Alliance for Prosperity. This is a US investment of $750 million in Guatemala, El Salvador, and Honduras to combat insecurity and illegal immigration. Robinson’s collectivist allies could issue judgments and block enforcement, especially along the border.

Even Robinson’s allies have affirmed US meddling in the 2015 elections. In an interview with Granma, Cuba’s Communist Party newspaper, a former comandante of the Fidel Castro-aligned Rebel Armed Forces (FAR), Pablo Monsanto, stated that “traditional [political] parties … leading in the polls were seriously harmed by political actions driven by the US embassy.”

The procedure for nominating judges and the attorney general includes primarily professionals outside of government — the Bar Association and law-schools deans. Robinson’s reforms would centralize this process in the hands of incumbent judges, mostly Obama-aligned collectivists, who could perpetuate their positions in Guatemala’s power structure.

In particular, only an indictment could suspend the attorney general, which would never happen. The attorney general herself would be the one to investigate and bring criminal charges — in other words, effective immunity to whomever occupies the post.

Robinson’s reforms have already been advancing in the Congress. Further, in the opening session on January 14, the new congressional president underlined that constitutional reforms were a priority.

Congressman Fernando Linares told the Impunity Observer that “Ambassador Robinson has been overtly involved in pushing this legislation. He has had members go to the embassy and threatened them with investigations unless they support [the reforms]. The ambassador has also pressured President Chinchilla to push this now” and not wait.

A few days later, the Justice Ministry arrested the president’s son and brother Sammy over a $12,000 invoice from an old case. Although not present at the hearing, as is customary, the judge ordered Sammy be held in custody. The ministry displayed him to the media, a violation of Article 13 of Guatemala’s constitution, and failed to share that Sammy had cooperated for months with the investigation and voluntarily appeared at the ministry. Meanwhile, the penalty for the alleged violations is just a fine.

Former Attorney General Conrado Reyes added to the Impunity Observer that this was “a show to force passage of the constitutional reforms [from] the CICIG and Justice Ministry … which have no standing or formal role in the process, so that their political allies can control the judiciary.”

José Luis González — asked by President Morales to serve on Guatemala’s Constitutional Court but vetoed by the CICIG commissioner and Robinson — told the Impunity Observer that the arrests “were to force Morales to have his party support the constitutional reforms to advance the political agenda of the left. I warned him, but he didn’t listen.”

On January 13, CICIG Commissioner Iván Velásquez and Justice Ministry functionaries, without standing to present constitutional reforms, briefed representatives of two political parties. One was Convergencia, whose representative strongly endorsed the plan. Granma further identified Comandante Monsanto as the president of Convergencia in their interview, in which he said, “Cuba is today an example for Latin America.” This is the company Robinson keeps.

If approved, Robinson’s constitutional reforms would be a stiff impediment to law and development in Guatemala, pivotal for locals and for the United States in the short and long terms regarding illegal immigration. In his inaugural address, President Trump said he did not seek to impose on others. He should then immediately remove Robinson from the ambassador post, before he does any further harm to Guatemala and US interests.