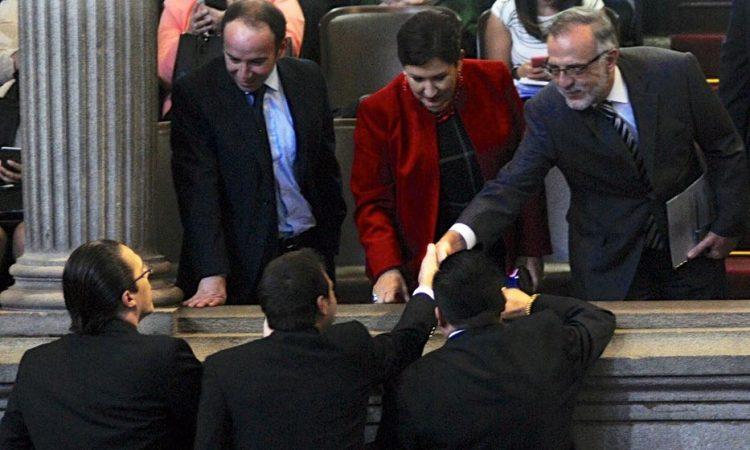 Attorney General Thelma Aldana and Cicig Commissioner Iván Velásquez interact with members of Congress during a session on changes to the Guatemalan Constitution. (El Periódico)

Policy intentions matter little, outcomes do. US taxpayer dollars are flowing to Guatemala, but local officials and the Obama-appointed ambassador are turning the aid objective on its head.

In 2015, the US Congress passed the Alliance for Prosperity, included in the Consolidated Appropriations Act, to “address the key factors in such countries contributing to the migration of unaccompanied, undocumented minors to the United States.”

Among the specific spending criteria, an objective is to “implement reforms, policies, and programs to improve transparency and strengthen public institutions, including increasing the capacity and independence of the judiciary and the Office of the Attorney General” [emphasis mine].

Guatemala is now violating this by pursuing constitutional changes proposed and promoted illegally by the UN Commission Against Impunity in Guatemala (Cicig), the Guatemalan Attorney General Thelma Aldana, and US Ambassador Todd Robinson.

Under the current Constitution, Guatemala chooses magistrates and the attorney general through nominating commissions that include university rectors, the Bar Association, and the deans of the country’s law schools. The proposed “reforms” would create a seven-person National Judiciary Board comprised of three members chosen by the country’s judges — one justice of the peace, one lower-court judge, and one appeals-court magistrate — alongside one Supreme Court-appointed lawyer from outside the judicial branch and three professionals from other fields chosen by the first four members.

How can individuals from the lowest rung of the judicial branch be the best people to select magistrates for the highest courts? Constitutional-law expert José Luis González has explained to the Impunity Observer that “The board will be controlled by members of the judicial branch and will have the power to intimidate the other branches of government.”

Former Attorney General Conrado Reyes says, “While not ideal, the current system is superior to the proposal, because it disperses power and includes independent law professionals — the Bar Association and law-school deans — from outside politics and the judicial branch.”

The US Congress’s stated intent of foreign policy toward Guatemala was not to concentrate power in the judiciary at the expense of the other branches of government. Such concentrated power in Venezuela saw the judiciary simply cancel the legislature. Guatemala’s judiciary is, not coincidentally, now dominated by magistrates ideologically chosen and supported by Ambassador Robinson and his radical allies descended from the Castro-supported insurgents in Guatemala’s internal conflict (1960-1996).

The methods Robinson, Cicig Commissioner Iván Velásquez, and Aldana have used are those of rulers such as Nicolás Maduro of Venezuela. Article 137 of the Guatemalan Constitution prohibits foreigners from involvement in amendments, and Article 154 prohibits public officials from activities not specified as their duties. Changing the country’s constitution is outside the realms of the attorney general and the Cicig commissioner. Article 277 lists who can propose constitutional reforms, and making any of them a conduit for the true promoter would violate the law.

According to González, “The mere presence in Congress of the attorney general and the Cicig commissioner while members debate these ‘reforms’ violates the Constitution and, considering how they have abused their power in various cases, intimidates members to vote for what they otherwise would not. This explains the repeated violations of parliamentary procedure and other violations of law regarding these ‘reforms.’”

Even worse is the participation of Robinson. Various columnists and Member of Congress Fernando Linares have denounced him for threatening members of Congress with Cicig investigations and visa cancellations if they don’t vote for the “reforms.”

Congressman Linares, the most outspoken opponent of the “reforms,” faces bogus discrimination charges for a stand he took in Congress while discussing pending disabled-persons legislation. The US consulate then revoked his visa days before he could travel to Washington, DC, to meet with members of the US Congress.

US congress members clearly need better information. Senator Patrick Leahy (D-VT), for example, recently stated that “If Guatemala’s leaders support Thelma Aldana and Iván Velásquez … we will do our part by supporting the Alliance for Prosperity, but if there are attempts to undermine [them], then [they] should look elsewhere for support.”

Similarly, Representative Norma Torres (D-CA) presented a resolution to the House of Representatives to reaffirm the commitment “to fighting corruption in Central America.” She added, “In Guatemala, we have seen Cicig lead the way under the strong leadership of Iván Velásquez.”

The promotion of constitutional “reforms” by Robinson, Velásquez, and Aldana to make the judiciary the dominant branch of government is sufficient reason to review policy towards Guatemala. This country in Central America deserves particular attention, because it is where illegal persons and materials must pass on their way to the United States through Mexico.

Guatemala is an unlocked backdoor into the United States. According to US Customs and Border Protection, in 2014, Central Americans apprehended on the southern border outnumbered Mexicans for the first time. In 2016, it happened again. All pass across Guatemala’s 595-mile border with Mexico.

The US ambassador, an Obama holdover, has promoted policies harmful to Guatemala and to the United States. If the constitutional changes go into effect, Guatemala will struggle to reverse course when the Trump administration undoes the Obama policy.