America's Future, with Partisan Justice, Is Guatemala
Skip to content 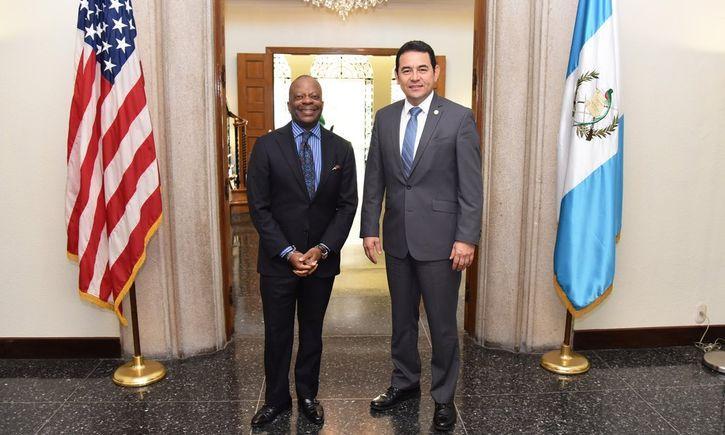 Democrat partisans and fervent President Donald Trump opponents are blind to the real threat to democracy the United States faces. They refuse to recognize abuse of power at the highest levels of the Obama administration and project that same thing onto Trump.

Partisan justice holds that political ends justify the means, which is antithetical to democracy. We need not look far to find where this road leads. Judicial abuse is on the verge of destroying a country that sends many illegal immigrants, gang members, and drugs to us.

With Mexico’s inability to control criminal cartels and its very porous 595-mile border with it, Guatemala is the key country in the land route for illegal drugs, migrants, and gang members.  President Jimmy Morales is a US ally who tries to stem the flow, but he is hampered by a judiciary run amok, controlled by the UN International Commission Against Impunity in Guatemala (CICIG), with State Department backing.

CICIG and State Department policies have led to the destruction of businesses and increased violence, lawlessness and migration, especially of minors. Former Vice President Joe Biden traveled to Guatemala three times in 12 months and publicly linked US aid to the continuance of the CICIG.

The Obama administration pressured successive administrations to name to key government posts, especially its Justice Ministry and judiciary, allies of the successors of the Castro-supported guerrilla from Guatemala’s 36-year armed conflict that supposedly ended in 1996. The CICIG and these allies, empowered by the State Department, have created an alliance of judicial terrorism.

The alliance’s political friends are immune from prosecution while everyone else is subject to the arbitrary application of law. Political opponents are jailed without evidence and kept there for years without trial, in violation of all law. This environment is shrinking the economy and intimidating almost all effective political opposition.

Former US Ambassador Todd Robinson openly intervened in the appointment of high-court magistrates. Abridging parliamentary procedure, the vote in Congress for his candidate was 145-6. The papal nuncio and the archbishop of Guatemala criticized Robinson’s intervention, as did a valiant member of Congress, who later paid for this and other opposition by having his US visa cancelled.

Since then, the high court has openly intruded in the affairs of the other branches of government. Against international law and Guatemala’s constitution, it tells the president which diplomats he cannot expel and instructs Congress regarding legislation it must pass.

The Constitutional Court protects its allies by illegally dismissing criminal complaints against them and punishes political opponents in government by stripping their immunity. The member of Congress whose US visa was revoked had his immunity stripped because of having offended handicapped persons by opposing in Congress legislation they favored.

Judges have ruled unsubstantiated, uncorroborated testimony of alleged victims sufficient to sentence members of target opposition groups to long prison terms, because they know the high court will illegally support them. Defendants are convicted without being able to confront witnesses against them, and favored lower-court judges can illegally petition for reversals of appeals-court rulings against them.

Despite never having had rule of law, this judicial terrorism under the alliance has brought Guatemala much closer to totalitarianism than ever before, although not from the president. Fear of arbitrary imprisonment and asset confiscation—a typical unconstitutional CICIG tactic—inhibits people from exercising their civil rights and contributing to civic causes the alliance opposes.

If this continues, the alliance will steal the 2019 elections and consolidate its power over the entire government. This is the Obama plan for Guatemala.

Due to a combination of more pressing problems and Orwellian State Department duplicity—led by Robinson’s successor, Ambassador Luis Arreaga—the Trump administration has overlooked the alliance’s damage to Guatemala and the United States. Trump could reduce the flow of illegal migrants, drugs, and gang members by reversing the Obama policy: removing the CICIG commissioner and supporting Morales.

Americans take their freedom for granted. They should reconsider. Obama’s program to pervert justice in Guatemala sheds light on the handling of the Clinton email, Trump-Russia collusion, and FISA abuse scandals. Underneath them is the same intolerance and feeling of moral superiority that team Obama applied in Guatemala to what they view as evil enemies to defeat at all costs. Without full disclosure and accountability—a return to the rule of law—the Obama program in Guatemala could be coming to a theater near you.