The Onslaught of Lawfare against Trump, Netanyahu, and Guatemala's Jimmy Morales
Skip to content 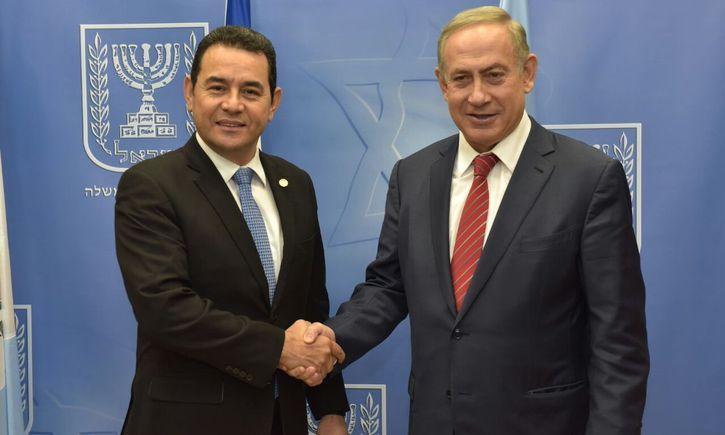 Israeli Prime Minister Benjamin Netanyahu, who visited the White House this week, is facing a dubious indictment for corruption, and Israel’s election looms on April 9.

Netanyahu joins Trump as a political target of his own nation’s legal system. A third leader in the same position is Guatemalan President Jimmy Morales, who has supported both Netanyahu and Trump. At the 2018 AIPAC conference, Morales announced the date he would move Guatemala’s embassy to Jerusalem. Attacks against his tenure have kept him from attending AIPAC this year.

The three face the same enemy, which uses dirty tricks to achieve its goals and is desperate to remove them from power for the same reason.

Israel and Guatemala, a Central American nation with 18 million inhabitants and a 600-mile border with Mexico, have enjoyed a close relationship since Israel’s founding. In 1947, it was Guatemala’s ambassador to the United Nations, Jorge Garcia Granados, who presented and successfully lobbied for the recognition of the state of Israel. To this day, Israel has streets named Granados and Guatemala.

Netanyahu gave an impassioned speech to a joint session of Congress in 2015 opposing the Obama nuclear weapons deal with Iran. Fifty-eight Democratic members of Congress skipped the address, including the president of the Senate, former Vice President Joe Biden. The Obama administration sent taxpayer money to an Israeli group trying to interfere in Israel’s elections and oust Netanyahu in that same year’s Israeli election. In Guatemala, Obama’s State Department sided with successors to Fidel Castro-supported guerrillas from Guatemala’s internal conflict. Under the aegis of a U.N. commission, these Marxist fossils have taken a leading role in the nation’s criminal justice system, and they are now using their newfound power against Morales.

Trump has endured two years of a political investigation initiated by Obama administration holdovers on the charge that he “colluded” with Russia and is its puppet. Special counsel Robert Mueller found no evidence that it was true.

Netanyahu is facing charges that he extended regulatory favors, but law professor Alan Dershowitz, a self-described liberal Democrat and civil libertarian, told Israel’s attorney general this would “endanger democracy and freedom of the press. … [It would] bring down a duly elected prime minister on the basis of an expansive and unprecedented application of a broad and expandable criminal statute.” Netanyahu denies the charges and adds, “The left understands that they will not beat me at the ballot box.”

The charges against Morales are likewise absurd and bogus. Hastily and desperately put together to discredit Morales along with Trump, they do not even allege actual crimes. Nor are the allegations attributable to Morales. But in an effort to gain leverage, the U.N. commissioner arrested Morales’s son and brother on minor administrative charges.

The opponents’ strategy against the three leaders is lawfare: the use of a legal system as a political weapon to damage and delegitimize an opponent while tying up his time and resources. This is the formula that socialists use to avoid being subject to constituent approval in their quest for complete power.

That is a difficult strategy to make work in the United States and Israel, but it is completely feasible in Guatemala, where the rule of law is not strong. Unimpeded and unscrutinized in Guatemala, the grossly illegal persecution of political opponents — show trials, incarcerations, and asset confiscations — has intimidated civil society and the public sector.

The policies of Trump, Netanyahu, and Morales share the attributes of free markets, rule of law, and individualism. Their opponents favor controlled markets, arbitrary application of law, and collectivism or identity politics. This fundamental divide was apparent this week when Obama hosted his own reception to compete directly with AIPAC’s traditional leadership reception.

Democrats are working with their socialist allies, including State Department underlings, to steal Guatemala’s June election for their agenda. If successful, the United States will lose an ally that could promote development and reduce the flow of illegal migrants and drugs. Guatemala will become an Israeli adversary, remove its embassy from Jerusalem, and recognize a Palestinian state, as local socialists have promoted.

Majorities of the three countries’ populations want the results that stem from the three leaders’ policies. Rather than seeking the will of constituents, socialists impose their destructive agenda through any means necessary. Upcoming elections in all three countries could determine the future of liberty.