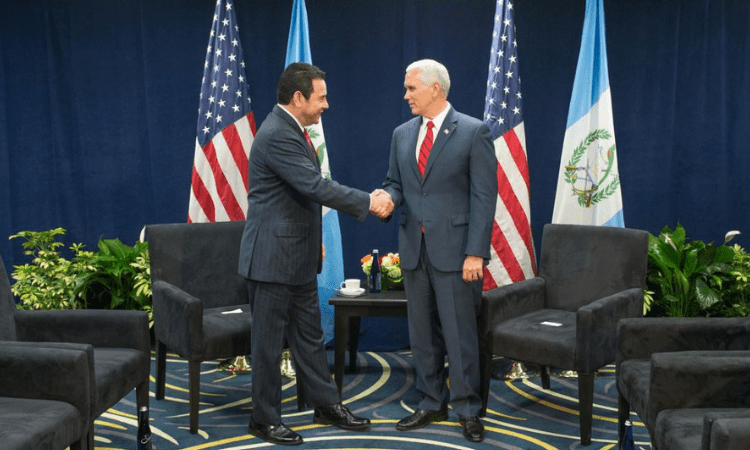 The fraud will likely end the opportunity to reduce the flow of illegal migrants and drugs to the United States. (The White House)

State Department permanent bureaucrats have harmed Guatemala and the United States by fixing Guatemala’s June 16 election. The fraud will likely end the most effective international opportunity for the Trump administration to reduce the flow of illegal migrants and drugs to the United States.

The deep state’s chosen candidate, former guerrilla and Socialist International vice president, Sandra Torres won the most votes but not a majority. When she was first lady in 2009, Torres’s husband granted Fidel Castro Guatemala’s highest honor. Now she faces Alejandro Giammattei in a runoff on August 11.

Torres has more than a dozen criminal charges pending against her, ranging from Guatemala’s internal armed conflict to money laundering. A report by the UN International Commission Against Impunity in Guatemala (CICIG) linked narcotrafficking to the UNE political party, of which Torres was secretary general and twice candidate for president. A Torres victory on August 11 would remove Trump’s leverage to bring order to the land route into Mexico from Latin America.

Guatemalans from across the political spectrum have denounced glaring election irregularities, such as bribes and vote flipping. There have been recount and audit requests of the electoral authority (TSE) with specific concerns regarding fraudulent use of tabulation software. Thus far, the TSE has not released the underlying data.

The US embassy supported Torres in the 2015 election, but she lost by one-to-two to current President Jimmy Morales. The Obama-Biden team immediately began planning to fix the 2019 election. With the ability to incarcerate political enemies without evidence, they intimidated Guatemala’s government into passing an electoral law that heavily favored Torres’s UNE party.

In 2016, the TSE began to violate the law to accommodate the need to fix the election. They used their own discretion and a CICIG report on political corruption to dissolve the two largest parties. The UNE became the largest party, even though the same report identified UNE corruption.

The UNE was the vehicle the embassy used to push its agenda on Guatemala’s congress and put embassy allies on the Constitutional Court, the last word on judicial matters. When a rival party introduced a resolution to condemn Venezuela President Nicolás Maduro’s illegitimacy, the UNE voted unanimously against it.

In August 2018, the TSE entered into an agreement with the CICIG, giving the CICIG a role in the election. Neither entity had the legal authority to enter into the agreement. Former Vice President Joe Biden previously traveled to Guatemala three times in 12 months to pressure former President Otto Pérez to extend the CICIG mandate. The CICIG prosecuted the embassy’s political opponents and acted illegally, as reported by the Wall Street Journal and Judicial Watch.

In a recent Miami Herald op-ed, Biden accused Trump of vilifying immigrants while ensuring a greater flow of them to our border. It is precisely Biden’s policy of imposing socialists on Guatemala that has resulted in a dramatic increase of illegal immigration.

Alongside TSE and CICIG criminality, a steady parade of Democrats came to Central America in 2018 and 2019. They helped the embassy give Guatemalans the impression that fixing the election is US policy. The Democrat support for illegality, so long as it furthers their political agenda, mirrors their attempts to delegitimize the John Durham investigation ordered by Attorney General William Barr.

Many Democrats have stood by the Constitutional Court, even as illegal rulings piled up. These include effectively granting themselves immunity from prosecution and ordering the Congress to pass specific laws. The court protects leftist political rulings, including the elimination of opposition parties and candidates from elections.

In his 2020 campaign kickoff in Orlando, Trump said Democrats politicize the judiciary. There is no greater example than Guatemala.

Senator Mike Lee (R-UT) has been the lone voice in the US Congress against State Department meddling in Guatemala. Other congressmen have denounced the CICIG, but not the illegal meddling.

Morales had political capital with Trump after he moved Guatemala’s embassy in Israel to Jerusalem. The State Department became nervous that Trump and Morales would get together and reverse the Obama administration’s alignment with Marxist-guerrilla successors. State Department personnel reported corruption charges against Morales to the Trump administration, neglecting to say they were the ones behind the charges.

Morales and Trump could have broken leftist control of the Constitutional Court and applied the law in Guatemala’s rural areas. Liberated from their oppressors, rural inhabitants along the border would have worked with security forces to identify suspicious activity. This is how to reduce the flow of illegal migrants and drugs to the United States.

In contrast to the unwilling response after threats against Mexico, Guatemala would gladly engage. Doing so would restart businesses and benefit the country. US Homeland Security signed an agreement recently with Guatemala, and the Trump administration is pushing to make Guatemala a safe country for asylum. None of that will work while the deep state continues the Obama-Biden policy.

Trump’s only chance to salvage the situation at this very late stage would be to immediately remove the US ambassador and apply Magnitsky sanctions against the criminal Constitutional Court and TSE magistrates for their human-rights violations. These acts would send a message to Guatemalans that the United States does not support imposing socialists.