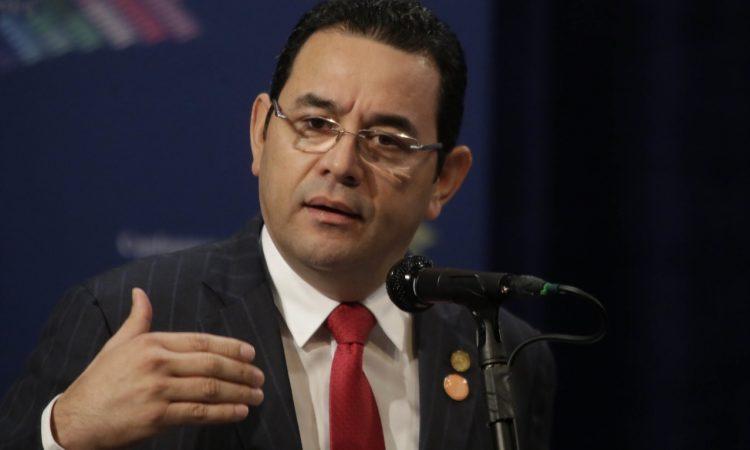 The US embassy created phony corruption charges against Jimmy Morales and warned the Trump administration against dealing with the Guatemalan president. (The presidency of El Salvador)

The White House announced on Friday Guatemalan President Jimmy Morales would meet with President Donald Trump on July 15 to discuss immigration and security. Yesterday, however, Morales announced he would “reprogram” the meeting over “speculations” and legal actions in the Constitutional Court (CC).

In addition to being the nation’s last word on judicial matters, the CC is a collectivist co-conspirator with deep-state US officials. This cabal has come between what could be a fruitful relationship between Trump and his counterpart in Guatemala.

The real subject of the meeting was Guatemala becoming a safe third country, which would permit Trump to circumvent Democratic Party obstructionism. More than 100,000 economic migrants monthly abuse US asylum laws. They falsely allege persecution, the requirement for asylum. US officials hold those with minors for 20 days, before releasing them pending a hearing that could be years away. Few appear at their hearings, which amounts to an open door to the United States.

Democrats believe illegal immigration favors them in the 2020 elections, and they appear to have no intention to cooperate with Republicans to reform asylum loopholes. They prefer to criticize Trump for detention conditions on the border that they themselves oversaw—like a thief who breaks the glass window of a store and complains of being cut.

The safe-third-country agreement would permit the administration to deny asylum hearings to aliens who have been in Guatemala. This is almost all of those at the border, since Guatemala is the only land route from Central and South America to the United States. The agreement would help Trump with his major campaign issue of 2016 and in his 2020 campaign.

Possibly in reaction to the events in Guatemala, the Department of Homeland Security released a document for publication tomorrow in the Federal Register modifying asylum procedures. The administration will limit aliens’ ability to request asylum if they failed to apply for it in “at least one third country” through which they transited. Even so, the agreement with Guatemala would still enhance Trump’s position politically and for the inevitable court challenges.

Guatemala has no direct benefit from the agreement. It would cost them money, which obviously the United States could pay. The price would be much less than the billions of dollars taxpayers now pay for holding unqualified asylum seekers.

Guatemala’s benefit from the agreement would be working with Trump to change the Obama-Biden policy that prevents development and keeps open the flow of illegal migrants and drugs. The past administration embraced Fidel Castro and the successors to the guerrillas he sponsored in Guatemala. Those groups dominate rural areas, where they force inhabitants to destroy businesses, invade private property, and deny police access to their communities.

Barack Obama and Joe Biden abused US power to install in key government positions allies to the guerrilla successor groups. In 2016, the US ambassador used threats of jail and asset confiscation to intimidate Guatemalan organizations to appoint his preferred candidates to the public prosecutor’s office and to the CC. Those officials act politically, regardless of the law, to carry out a socialist agenda.

With support from State Department permanent bureaucrats and many Democrats, the CC has illegally squashed criminal complaints against three of its key members. They have de facto ruled themselves above the law.

Morales’s statement cancelling the meeting with Trump said reprogramming the meeting would depend on CC action. Several persons filed injunction requests against the agreement with Trump. The CC should have immediately dismissed the action for lack of standing and for seeking relief from an inexistent act. The CC also violated separation of powers by accepting the case because the judiciary has no role in foreign affairs.

The CC granted the preliminary injunction and ordered the president to submit the nonexistent agreement to Congress. This is like ordering the president to brush his teeth tomorrow morning. Besides being illegal, the ruling was pure show, apparently intended to intimidate Morales and confuse the public.

The embassy has never denounced obvious CC illegality. Now they are silent regarding an illegal CC action that prejudices their boss, the president of the United States.

Along with Democrats and their media allies, embassy allies have vocally criticized the agreement. They falsely claim that Guatemala would have to absorb all the migrants now trying to enter the United States, which it of course couldn’t do. Once it became clear the asylum loophole had closed, economic migrants would stop seeking asylum. They would resort to overt illegal entry, and Guatemala would not be their destination.

Guatemala would reject false asylum claims, which would fall to a low number, and not have to take in large numbers.

It is highly likely embassy personnel in Guatemala oppose the agreement and could even be behind the efforts to thwart it. They have been fixing Guatemala’s presidential election for a former guerrilla and vice president of Socialist International, who would join the Cuba-Venezuela-Nicaragua axis. Working together on the agreement could lead to Trump becoming aware of this betrayal with unpleasant consequences for many permanent State Department bureaucrats.

Since Morales followed Trump in moving Guatemala’s embassy in Israel to Jerusalem, socialists trying to impose their corrupt ideology have been worried the two could work together to bring proper law enforcement to Guatemala and recover its border areas. The embassy, through a corrupt UN commission, created phony corruption charges against Morales and then warned the administration against dealing with Morales.

Trump should immediately remove the US ambassador and assure his embassy executes his policy. He should correct the shameful embassy intervention in Guatemala’s obviously fraudulent elections—praised publicly by the US ambassador—by supporting legitimate claims to repeat the June 16 elections. Both countries would benefit by working together, including on the safe-third-county agreement.