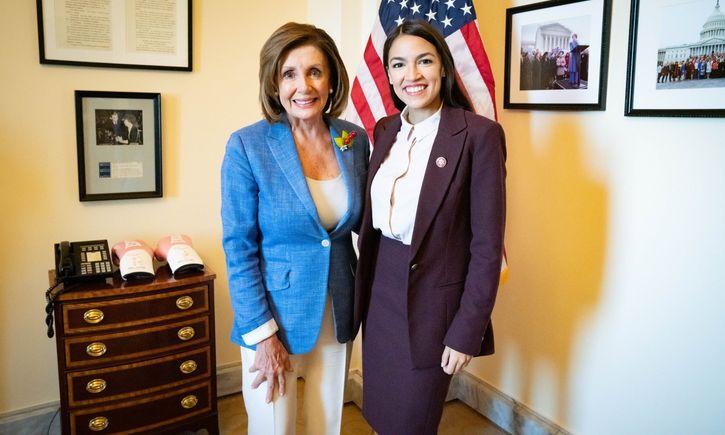 Speaker of the House Nancy Pelosi (D-CA) and two “squad” members, Representatives Alexandria Ocasio-Cortez (D-NY) and Ilhan Omar (D-MN), appear to have put aside their feud. Their common cause is socialism abroad, to keep illegal immigration flowing, which they believe will help them defeat President Donald Trump next year.

Prensa Libre, Guatemala’s largest newspaper, reports Pelosi and a congressional delegation, including the two squad members, will visit Guatemala on August 8. Their mission is to keep migrants coming to the United States. They also intend to help their State Department comrades impose the socialist candidate in Guatemala’s presidential runoff on August 11.

The event that united the subversives was the asylum agreement signed in the White House on July 26 with Guatemala. The agreement circumvents Democrat refusal to reform asylum laws, an open door on our southern border.

The administration can now deny asylum hearings to migrants and send back to Guatemala those who passed through the country. They will have to apply for asylum there, and the United States will pay the costs Guatemala incurs handling them. There will be few, since almost all are economic migrants unqualified for asylum.

Economic migrants have taken advantage of loopholes in our asylum laws to enter the United States and seek work. Guatemala is not an attractive labor destination. The Department of Labor is negotiating a mutually beneficial guest-worker program with Guatemala.

Believing the crisis on the southern border helps them in the 2020 election, Democrats must maintain the flow. Their policy of keeping urban populations poor and dependent has produced failing cities such as Baltimore. Their comrades in Guatemala do the same. The temporary-worker program would create independence, which collectivists oppose.

Democrats feign outrage over Russian meddling in the 2016 presidential election, yet they have no problem corrupting authorities to favor socialists in Guatemala’s 2019 election. President Barack Obama’s State Department diplomats in Guatemala illegally forced their allies onto its Constitutional Court (CC)—Guatemala’s last word on judicial matters. These magistrates issue illegal rulings that promote a socialist agenda.

The CC protects the successors to Fidel Castro-supported guerrillas that fought an armed conflict (1960-1996) against the US-supported Guatemalan government. These groups wreak havoc, especially in border areas, destroying businesses and invading private property. This has harmed the economy and security, leading to more illegal migrants and drugs going to the United States.

The US embassy intimidated the Guatemalan Congress into passing an electoral law favoring the UNE. The embassy and comrades took over the electoral authority. They canceled rival parties and eliminated opponents from running, while not enforcing the law on Torres. US Ambassador Luis Arreaga protects the electoral authorities and the three-magistrate CC majority favoring Torres.

On July 12, the White House announced President Jimmy Morales would visit on July 15. However, the day before he was scheduled to leave, the CC issued a confusing, illegal ruling that led to the meeting’s cancelation.

Senator Patrick Leahy (D-VT) and Representatives Eliot Engel (D-NY) and Norma Torres (D-CA) have denounced Morales as corrupt, including for opposing the CC. However, from when the two administrations began negotiations until the deal was signed, the Democrats were silent. Apparently they hoped their State Department and media soulmates could kill the deal and that Trump would forget Guatemala.

Joe Biden visited Guatemala three times as vice president to support socialists. He too was silent about the agreement. In Wednesday’s Democratic Party presidential debate, Biden bragged about his support of funds going to Guatemala and elsewhere in Central America.

With the agreement and Trump focused on Guatemala, Democrats face a challenge to their socialist agenda at home and in Guatemala. The two are intimately linked. To prevail in both countries, Trump must take control of his embassy and support Morales in applying the law to the corrupt CC and electoral magistrates.

Unable to claim asylum in the United States as a result of the US-Guatemala agreement, economic migrants will revert to illegally crossing the border. With the judiciary and criminal-justice system properly applying the law, Morales would gain help from inhabitants on the border. Collaboration would reduce illegal migration through what Acting Homeland Security Secretary Kevin McAleenan calls the choke point.

The other advantage of controlling the embassy and applying the law would be preventing theft of the August 11 election for Torres. As president, the self-described socialist would be a Democrat ally facilitating the flow of illegals. This is the reason for the visit from Pelosi, AOC, Omar, and comrades.

With so much fraud in the initial June 16 voting, Guatemala should hold new elections. Without State Department interference, conservative Guatemalans would likely prevail. At stake is liberty, security, and prosperity for both countries.