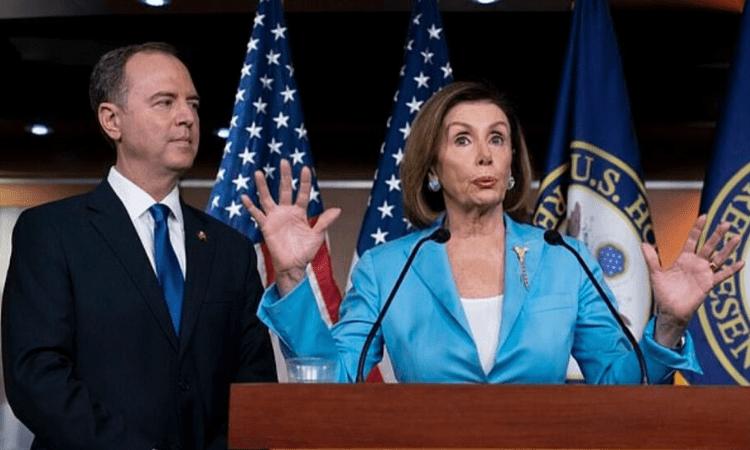 A full impeachment trial in the Senate is a generational opportunity to expose radical Democrats and their deep-state allies. Will Republicans take it?

House Speaker Nancy Pelosi knew it was foolhardy to pursue impeachment, but she failed to control her caucus led by Representative Alexandria Ocasio-Cortez and the radicals. Democrats will pay a tremendous price for that failure if—and only if—the Senate conducts a robust trial complete with witnesses and cross-examinations.

In their impeachment proceedings against President Donald Trump, House Democrats have portrayed themselves as an assembly of patriots asserting constitutional values to defend an imperiled republic. Meanwhile, Democrats and media allies have depicted Republicans as an inflexible mob, ignoring facts and defending the president with procedural arguments.

A Senate trial under evenhanded rules would dispel these caricatures. When Democrats are shorn of their ability to pivot from one false charge to another, Americans—watching on television without media filters—will see Democrat leaders in their actual size and shape.

Republicans could wish for nothing better.

Senate Majority Leader Mitch McConnell has reportedly told his caucus that calling witnesses could lead to “mutually assured destruction.” Apparently, McConnell believes extended testimonies could present a problem for some Republican senators facing election in 2020. With the potential for another Supreme Court nomination, McConnell does not want to do anything that could cost him even one vote.

In ordinary circumstances, his position would be reasonable. In this circumstance, anything less than a full trial would forgo a monumental opportunity.

The difficulty with a quick Senate vote is it would hand the Democrats an edge precisely where they excel. If the Democrats are voted down in the Senate without a full trial, they will get the crucial argument they need to win their war of words. They will say Republicans cut short the trial to hide Trump’s guilt and to suppress an open and shut case.

That false narrative could give the Democrats what they really want: victory at the polls in November.

The House hearings, as produced by the Democrat majority, were hardly better than show trials. The American people—who recognize unfairness when they see it—were not impressed. Even with heavy-handed management, Democrats lost when Jonathan Turley, the lone witness for Republican arguments, ate his three opponents for lunch and dinner.

Imagine the spectacle a level playing field in the Senate would produce: Adam Schiff in a fair fight with, say, Alan Dershowitz. From the get-go, it would be highly educational. The cumulative effect would be brutal.

A Senate impeachment trial is an ideal venue for exposing the Democrats’ big lie: that Trump extorted Ukraine’s president for help in the 2020 election. This concoction, which Democrats have the nerve to call settled fact, would conflict with a more credible explanation: that Trump’s interest in Ukraine’s president was to expose corruption from America’s 2016 election, which lingers in both countries.

Hardly the biggest of those—but one the Democrats have worked hard to suppress—is the Joe-and-Hunter Biden tag-team playing an old favorite: the cash-for-influence game.

Most Americans have heard about that racket, but few know that Joe Biden was also President Barack Obama’s point-person on Central America, as he was on Ukraine. As a longtime resident of Guatemala, I watched and reported on how the deep state and Biden installed a heavy-handed, corrupt judiciary to support their socialist allies, including Democrats.

The pattern in Ukraine is eerily similar to Guatemala. Under the pretext of anti-corruption efforts, the State Department intervened with the Prosecutor General’s Office to protect certain Ukrainians. Two of them were criticized by a Ukrainian court for interfering in our 2016 election.

Trump met with Guatemalan President Jimmy Morales yesterday, one day before Democrats vote on impeachment. The US president was seated with someone targeted by the same Democrats, deep state, and media for removal from office on false charges.

The impeachment trial has the potential to uncover evidence that vindicates the president’s motives—with an unprecedented mass audience getting direct access to the disclosures.

That is why Senate Republicans, instead of cutting off debate, would do better to let the arguments rip. Even if the president wins reelection, the Democrats will come at him again unless they are exposed in a live examination witnessed by the American people. That is the unique possibility on offer with a full trial in the Senate.