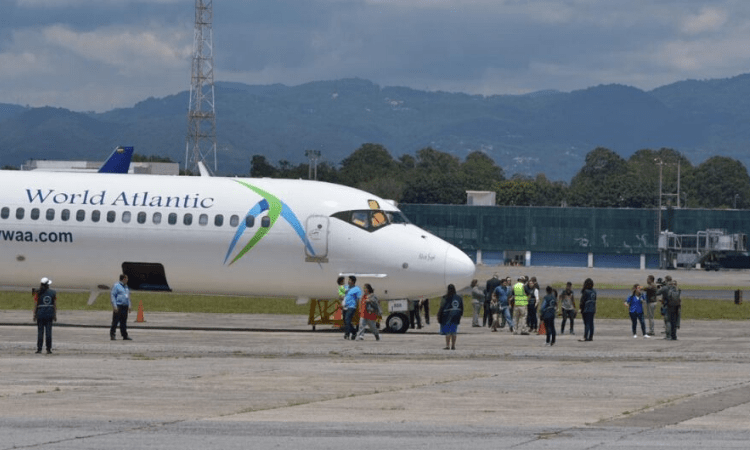 The person deported from the United States decided to skip Guatemala and return to his village in Honduras. (PrensaCominutaria)

Late in November, the United States deported the first migrant, a Honduran, under the new US-Guatemala agreement. Guatemala complied with its obligation to offer asylum. The agreement’s successful implementation testifies to the economic rather than political motives—and false asylum claims—behind the northward migration wave.

According to the agreement, Guatemala consents to no longer be a conduit for economic migration, which is crucial since Guatemala is the only land route into Mexico for illegal migrants from Latin America. Guatemala now grants asylum to qualified migrants who enter its territory, and the Trump administration has promulgated rules, under litigation, to avoid releasing asylum applicants awaiting hearings.

The person deported from the United States, who claimed to be a victim of persecution, decided to skip Guatemala and return to his village in Honduras. The occurrence underscored a salient reality: most often asylum is not a sincere claim. A true asylum-seeker flees persecution, and few people arriving at the US-Mexico border fit that description.

Even so, Democratic Party spokesmen have labored long and hard, with notable success, to convince Americans that “asylum-seeker” is a valid title for all immigrants. So when the Trump Administration and Guatemala were negotiating their asylum agreement, Democrats worked ferociously to defeat it.

In mid-July, President Donald Trump told the press that Guatemala’s high court had prohibited the agreement. Trump’s statement was incorrect, and for a curious reason.

The president’s own embassy in Guatemala had apparently misinformed him. The presidential misstatement shed light on an uncomfortable fact: the US embassy is in the hands of the president’s political enemies who are imposing socialism on Guatemala. These are ideologically driven holdovers from the Obama administration.

Trump refused to be derailed by Guatemalan magistrates and his own diplomats. He threatened tariffs on imports from Guatemala, visa restrictions, and fees on the $9 billion per annum in remittances Guatemalans send home—a major portion of Guatemala’s economy.

Trump’s statements obliged the magistrates of Guatemala’s Constitutional Court (CC) to come out of the shadows. The magistrates announced they had done nothing to stop the agreement.

In fact, the CC had ruled Guatemala’s president had to submit the agreement to his congress for approval. The CC ruling was illegal, but it offered a pretext for the US embassy to tell the White House the Guatemalan executive could not make the agreement.

Ten days later, Guatemalan and US officials signed the agreement in the Oval Office.

Regardless, the CC continues to subvert Guatemala’s freedoms. The CC is another wing of the US Democratic Party and plays along with its shenanigans. In August, three days before Guatemala’s presidential election, Speaker Nancy Pelosi and a Democrat congressional delegation visited. They enjoyed a photo shoot with the ambassador and two corrupt socialist judges and gave moral support to socialists born from guerillas funded by Fidel Castro.

Barack Obama’s ambassador to Guatemala, Todd Robinson, had used threats of jail and visa revocations to bully Guatemala’s congress. It consequently named a guerrilla-party magistrate to the CC, which gave the court a radical majority.

Since 2016, the CC has been Guatemala’s de facto ruler, the key to socialist domination and lawlessness. The CC has discouraged investment by undermining property rights. Robinson’s successor, Luis Arreaga, appointed by the current State Department, uses the CC to perpetuate Obama administration policies.

As long as these magistrates hold their posts, Guatemala’s economic development will remain paralyzed, and more locals will feel compelled to leave. By collaborating with socialists, deep-state diplomats and the CC, Democrats are increasing the push factor by exacerbating the problems that drive people to migrate.

Trump is taking all possible actions to assure the end of the asylum-abuse pull factor. The agreement with Guatemala was the first and most important step to that end, but the push factor remains.