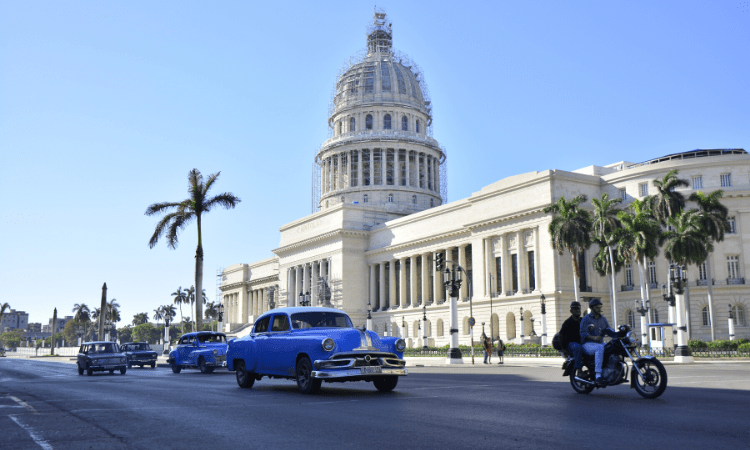 Socialist regimes in Cuba and Venezuela promised to eradicate poverty and raise their citizens’ standard of living. Ordinary Cubans and Venezuelans learned, however, that their new tyrants had only one goal: to stay in power.

Nicaragua, Bolivia, and Ecuador followed their lead, and now these nations have large fiscal  deficits and underground economies. Corruption and the erosion of civil liberties are another by-products.

Actually, most of the region—including its largest economies Brazil, Argentina, and Chile—have been guinea pigs for authoritarian central planning. Now Andrés Manuel López Obrador wants to add Mexico to the list.

Leftist takeovers have followed a script in all these nations. Studying these stories and learning their agenda could prevent more Venezuelas in the future.

Socialists have used populist strategies to win elections. Their political leaders have been outsiders, with military or guerrilla backgrounds, who appeared to arrive at the right time to save the country from decline.

Fidel Castro in Cuba, Hugo Chávez in Venezuela, Evo Morales in Bolivia, and Rafael Correa in Ecuador all assumed power after coup d’états. Those events allowed them to discredit previous regimes as incompetent or corrupt.

Since Latin America is a developing region marked by poverty and deep inequality, social-justice rhetoric resonates with a large segment of the population. Leftist leaders blamed large corporations and foreign governments for their misfortunes while promising prosperity for all.

In Venezuela, private-sector repudiation became so popular that many citizens approved expropriations at the beginning of the Chávez administration. The logical consequence was a dearth of investment and economic collapse.

Ballot boxes were key to staying in power, so they reformed electoral rules to tilt the balance in their favor. Daniel Ortega in Nicaragua was able to return to power only after massive voter fraud in the 2006 election.

Once they get enough electoral endorsement, socialists are ready to transform the structure of the state. In Ecuador, Correa argued there was institutional chaos and ordered a full-scale redesign of institutions in 2009. A decade later, the size of the government has more than doubled, but public-spending effectiveness has not.

Socialists often aim at creating a new constitution to pave the way for further state control, interventionism, and cronyism. This is the reason why protesters in Chile made it their main demand. Although Michelle Bachelet served two terms as president, the track record of Chilean free markets, property rights, and the rule of law prevented socialists from subverting republican institutions. That is about to change if Chilean socialists have their way in the upcoming April plebiscite.

Socialists do not try to hide their desire to censor the media. In Nicaragua, Daniel Ortega has prosecuted and jailed journalists since social disruption began in April 2018. Harassment and death threats have forced many journalists to leave the country and traditional newspapers to cease publication.

To silence the opposition, the Kirchners in Argentina targeted businessmen with tax audits; Ecuador and Nicaragua weakened nonprofits; and Bolivia fabricated legal charges against political opponents.

Lawfare is a favorite tool. During a televised presentation, Evo Morales even said “I tell the lawyers: ‘If it’s illegal, go ahead and make it legal. That’s what you went to school for.’” His administration did not shy away from retroactively enforcing laws to their benefit.

No socialist regime is complete without propaganda. Latin-American populists have resorted to modern advertising, including large ministries for propaganda and manipulated statistics, to portray their administrations as successful. Cristina Kirchner faked inflation figures. Chávez hosted a weekly televised program to praise himself but mainly to rail against his opponents. Nicolás Maduro has continued these broadcasts.

Maduro ordered the Venezuelan Central Bank (BCV) to stop publishing national economic indicators in late 2013. A year before, oil prices started to decrease, and the Venezuelan economy began to feel the impact of mismanagement and splurge spending.

Although international organizations and opposition leaders reported the government’s economic data was distorted, the official figures of capital investment and oil exports, for instance, do show how Venezuela ended up in her debacle.

Most of these socialist regimes enjoyed an economic bonanza during their first years in power, mainly due to high oil and natural-gas prices. Given that a large portion of revenue came from commodities, rather than taxpayers, governments raised public spending without much citizen oversight.

Good times also allowed leftists to work against US hegemony and trade with other nations. At the beginning of his administration, Correa expelled a US military base and stalled free-trade agreements with the United States and the European Union. Tough economic conditions, however, obliged him to pursue a trade deal with the European Union, Colombia, and Peru at the end of his administration.

With the excuse of economic sovereignty adopted by the 2008 constitution, Correa planned to boost national industries. Simultaneously, he raised import duties up to 45 percent on more than 2,800 goods. These included construction tools, industrial machinery, and raw materials, which hindered overall economic output. Ecuador is far from being an industrial nation today. The outcome of this policy proved once again protectionism cannot transform a commodity-oriented economy.

Latin-American leftists emphasize helping the poorest and most vulnerable to offset unequal opportunities. The irony is that the scope of government intervention required usually generates bigger problems and makes people even poorer.

For example, in Bolivia, the price of sugar increased sharply in 2011. The Morales administration’s response was to impose price controls and ban exports. Rather than stabilization, smuggling and shortages ensued, forcing the government to ration sugar.

Expansive monetary policies are another favorite tool to finance their ambitious, unsustainable social programs and to maintain their political base. One need look no further than Venezuela and Argentina to understand the destructive effects of inflationary spirals.

While Cristina Kirchner imposed currency-exchange controls, Maduro decided to delete zeros from the national currency and create his own cryptocurrency: the petro. Argentines and Venezuelans, however, keep preferring US dollars and bitcoins.

In Ecuador, however, Correa faced a stumbling block: the economy dollarized in 1999 to prevent this exact kind of currency manipulation by politicos. He then created a state-run digital currency to circumvent dollarization constraints on his expansive monetary policies. Ecuadorians did not trust it and refused to use it, which died a shameful death in 2018.

Their successive failures have not stopped Latin-American socialists. They continue to export the Cuban and Venezuelan models, undermining the rule of law and removing checks and balances in every nation where they win elections. After they successfully jeopardize economic and individual liberties, few or no incentives remain to do business and invest. As a result, people move to other countries, and capital outflow increases.

Those countries that have not yet been a target of these leftist tactics, including the United States, should take note of their script. Becoming aware of their game-plan could be the best protection against socialist power grabs.