Biden versus Sanders Is Socialist versus Socialist
Skip to content 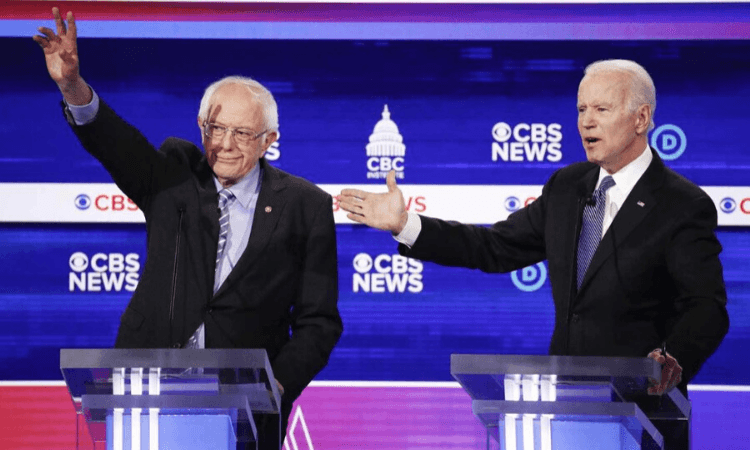 Biden had no choice but to attend the debate because he cannot win the general election without the Sanders faithful. (Silverio Pérez)

The Democrat establishment and their media partners have coalesced behind supposed moderate Joe Biden because of their opposition to self-described socialist Bernie Sanders. In normal circumstances, Biden would have declined Sunday’s debate, given this support coalition and his delegate lead. However, Biden had no choice because he cannot win the general election without the Sanders faithful.

In a Michigan poll, 60 percent of Sanders supporters said they do not plan to back the Democrat nominee if he is not Sanders. Biden’s dilemma in the Sunday debate was how far to go toward Sanders’s positions to attract his supporters.

Addressing the press after the Tuesday primaries, Sanders listed the policy positions on which he would press Biden in the debate. There were no substantial differences between Biden and Sanders on Sunday.

Moderator Jake Tapper quoted President Donald Trump denying responsibility for problems with coronavirus testing because of regulations and red tape he inherited. “Did bureaucratic red tape hamper this response in any way?” he asked. Biden said no and did not substantiate. He cannot because he is a big-government socialist.

To distance himself from the socialist label, Biden criticized Sanders’s single-payer health-care proposal by saying it failed in Italy. Biden’s solution is the unwieldy Obamacare. The 2010 law has been such a train wreck it appears intentionally structured as a stepping stone to federal single-payer health care.

Biden and Sanders claim to oppose open borders. However, the result of their immigration policies is exactly that. Biden would only deport “undocumented people” who committed felonies in the United States. When asked if sanctuary cities should turn over wanted people to ICE, Biden replied no. Sanders said, “Of course not.” Sanders’s assertion he would end ICE raids drew no opposition from Biden.

Biden agrees with Sanders that income and wealth inequality are real. Of course they are; that is nature. The message to Sanders supporters, in case others miss it, is Biden will use the government to reverse the inequality. This is the common selling point of socialism and communism—be it initially democratic or not—which have led to destitution and tyranny whenever they have been tried.

Sanders said climate change is an existential threat. Biden said, “Bingo.” Biden criticized the cost of Sanders’s plan, as he did with health care. Since they agree on the principles of the Green New Deal and the need for government-run health care, cost is not the issue. Either’s plan would destroy the economy.

The same applies to fossil fuels. The Biden and Sanders plans—part of their climate-change opposition to capitalism—can be summarized as no more fossil fuels.

Biden’s most aggressive criticism of Sanders was regarding the positive things he has said about Cuba and other dictatorships. Sanders insisted he has always opposed authoritarianism everywhere, but he contended we should not ignore some positive aspects of those countries.

After Biden’s attack on Sanders’s praise for dictators, moderator Ilia Calderón told Biden former president Barack Obama had praised Cuba’s education system. Biden shot back, “He was trying to change Cuba policy … to open them up.”

Obama’s opening to Cuba was a lifeline to the Castro regime, which was starving for hard currency because Venezuela was cutting its subsidies due to its own problems. Permitting US tourism and the use of US credit cards in Cuba helped sustain the dictatorial regime. Biden brags about the Obama administration and takes credit for what serves his electoral needs. Their help to Cuba harmed America much more than Sanders’s words.

Biden adhered to the core Democrat value—collectivist identity politics—when he promised to nominate a black woman to the Supreme Court. Jonathan Turley, a constitutional-law professor at George Washington University, found it troubling to apply a requirement that would be unconstitutional according to the Supreme Court if used for admission to a public college.

Democrat media partners have been attacking Sander’s “democratic socialism.” NBC News ran an op-ed entitled “Bernie Sanders is wrong on democratic socialism in Sweden, and everywhere else.” NBC appears to think this helps distinguish Biden from Sanders, but it actually helps Trump.

Purported new opposition to socialism from Democrats and their media partners puts the burden on them to offer growth policies. However, as Biden showed in the debate, they all favor increasingly intrusive and growing government—more severe socialism.

The economic success of the Trump administration, such historically low unemployment, is mostly due to cutting burdensome regulations. This has permitted small and medium-size businesses to flourish and compete with large businesses. It is also in direct contrast to the policies offered by Biden and Sanders in the debate.

In a naked pitch to Sanders supporters and confirmation of his socialism, Biden said he would campaign for Sanders if he became the nominee. The November election boils down to socialism and destitution versus liberty and prosperity, regardless of whom the Democrats name as their candidate.