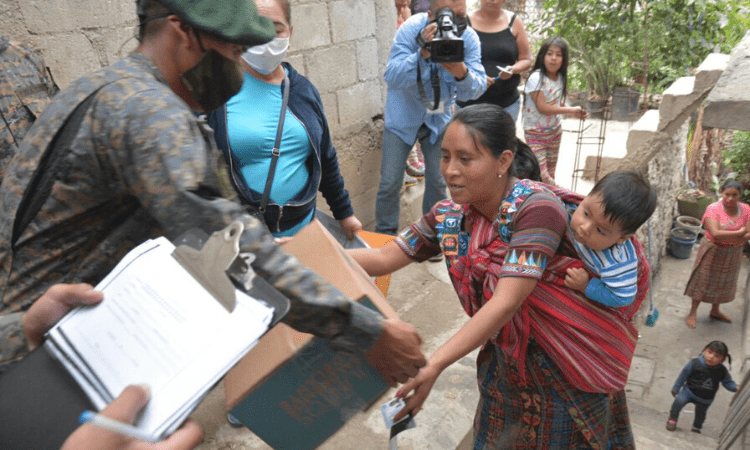 The government has had to scramble a relief package that will balloon the country’s debt and increase inflation. (GuateOpina)

The COVID-19 emergency in Guatemala has laid bare the rhetoric of NGOs that received more than $92 million from public coffers last year. The continued misery and lawlessness in the very areas they operate prove they are more interested in politics than development.

The number of infections and related deaths in Guatemala is still low, but the ongoing lockdown since mid-March is taking its toll on the livelihoods of millions of Guatemalans. Human-rights activists have yet to take meaningful actions to support those who cannot make a living during the quarantine. The government has had to scramble a relief package that will balloon the country’s debt and increase inflation.

On social media, Guatemalans are calling for nonprofits to deliver food, medicine, and protective gear to those the activists allegedly defend and support. They are starting to realize left-wing activism is a façade, and their social-justice message a ruse to keep the aid funds flowing.

These organizations have gained significant political clout since 1996, when peace accords ended a decades-long armed conflict between the government and Marxist rebels. Many guerrilla members, who openly defended communist ideals, rebranded themselves as human-rights activists and founded their own NGOs.

These nonprofits settled down in rural and border areas with little law enforcement. Today, Guatemala is home to at least 115 of these nonprofits that receive funding from the United States, Sweden, the Netherlands, France, and other countries. Rather than usher in economic development, their presence has accompanied the rise of drug-trafficking, violence, and emigration.

Economic conditions in Guatemala continue to deteriorate alongside a growing industry of NGOs catering to donors at home and abroad. The Guatemalan Statistics Institute (INE) reported in 2019 that a whopping 70 percent of the workforce subsist in the underground economy.

Moreover, the INE found that around 400,000 children between seven and 14 years old work in Guatemala, while the World Bank shows school enrollment has decreased in the last decade. Child labor, recently denounced by a British documentary, massive emigration, and a growing shadow economy are noticeable symptoms of a country where almost half of the population live in poverty.

It is no wonder why Guatemalans are leaving in droves for greener pastures.

However, left-wing agitators know better than ending this state of affairs. They have few incentives to improve the conditions—without destitution, their role as alleged saviors would disappear. Weak communities in rural areas justify NGO existence and funding, and nonprofits are the gateway for illicit and lucrative activities. Instead of promoting development and jobs, they organize protests and roadblocks. Instead of upholding the law and respecting officials, they promote disobedience and criminality.

Lawlessness along the border with Mexico became even more evident at the beginning of the COVID-19 emergency. Hundreds of migrants evaded controls through clandestine crossing points. Guatemalan President Alejandro Giammattei urged local communities to help stop those entering the country so the government could test and place them under quarantine, to no avail.

In late February, the Guatemalan Congress passed a bill seeking to shed light on the finances of NGOs that receive funds from abroad. President Giammattei signed it into law on February 27.

However, in a move that shows how the progressive agenda has taken over the country, the high Constitutional Court (CC) granted an injunction against the law, illegally preventing it from entering into force.

Even with scant monitoring, the government’s accountability agency has identified irregularities in 30 NGOs. These include illegal public financing and contract breaches. The need for review is urgent, but the CC magistrates have decided to ignore the constitution and instead favor the allies that appointed them to their posts.

The lack of transparency means no more government funds should go to NGOs that refuse oversight, which would uncover their incompetence and collusion with globalists.

Social-justice activism in Guatemala’s countryside has not only been ineffective but counterproductive. It has exacerbated lawlessness and reduced job opportunities. In the end, taxpayers have borne the costs for years, and this time is no exception. The Guatemalan government has taken on more debt to give a $130 bonus to around 200,000 citizens in low-income households. Including other relief packages, taxpayers will end up footing the $1.42 billion COVID-19 emergency bill.

Guatemalans have every right to question leftist agitators masquerading as human-rights activists and demand accountability through their elected representatives.

The fact that insufficient economic development and high levels of child labor, migration, and informality have endured for more than two decades suggests these nonprofits are not fulfilling their mission. They are, instead, keeping rural communities vulnerable to justify their continuity in Guatemala.