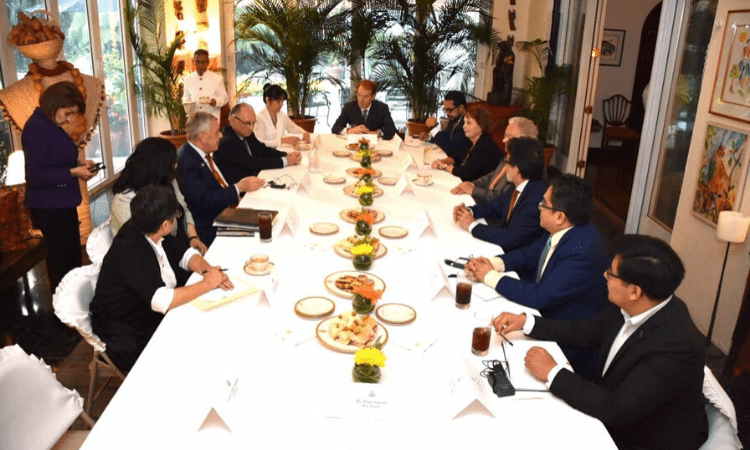 Many NGOs in Guatemala ignore their stated missions and become a threat to public order. (Ricardo Mendez Ruiz)

A recent ruling from the Constitutional Court (CC) of Guatemala proves the country’s progressive establishment—led by US Ambassador Luis Arreaga—favors foreign-funded NGOs over the Constitution. Rather than enforcing accountability for all, the CC magistrates have secured impunity privileges for organizations that operate their own outlaw agendas.

The court granted a temporary injunction against a new law passed in late February seeking to shed light on the finances of NGOs, many of them thinly veiled socialist agitators and apologists for lawlessness.

Currently, NGOs in Guatemala do not receive sufficient supervision or accountability. Several are under investigation for misappropriation and contract breaches. Lawmakers wanted to make sure the authorities had the necessary power to monitor and expel foreign entities, as any sovereign government must be able to.

To understand how Guatemala reached a point of NGOs as a national-security threat, we need to take a long look back. The country’s history with NGOs can be divided into three periods: (1) before the 1980s, (2) the 1980s transition to democracy, and (3) from the 1996 peace accords to the present.

Before the 1980s, the presence of NGOs in Guatemala was minimal. The first wave came from Germany and had ties to German political parties, such as the Konrad Adenauer Foundation. Others came from churches and religious organizations from many countries providing, in most cases, humanitarian aid.

When the democratic era started with the 1985 Constitution, Guatemala opened its doors to foreign activists interested in helping with development. For instance, in 1987 the Friedrich Ebert Foundation set up a permanent office in the capital city and began collaborating with emerging political parties.

The 1996 peace accords put an end to a bloody internal armed conflict between Marxist terrorists and the Guatemalan state. Many terrorists lay down their arms, rebranded themselves as human-rights activists, and founded their own NGOs.

This is consistent with the strategy adopted at the São Paulo Forum, an annual meeting of Latin American socialists started in 1990 by Cuba’s Fidel Castro and Brazil’s Lula da Silva. When violent revolutions failed in Latin America and most guerrillas disbanded, communists changed to subversion from within.

With the end of the armed conflict and the military withdrawing from Guatemala’s countryside, NGOs stepped into the vacuum. Later on, they also sought to penetrate the executive, the judiciary, and the Prosecutor General’s Office by directing the appointment of allies to key posts. Major actors in this regard were the Obama administration, working through the US embassy, and the International Commission Against Impunity in Guatemala (CICIG), a UN entity that operated in the country between 2006 and 2019. The embassy and the CICIG took over the CC and Prosecutor General’s Office. Working with guerilla-successor NGOs, this cabal became a powerful vehicle to force lawmakers and other elected and appointed officials into submission to its foreign-funded agenda of socialist imposition.

Today, Guatemala is the second country after Brazil with more UN agencies on site. At least 115 other NGOs who receive funds from the United States, Sweden, the Netherlands, France, and other countries also have a presence.

Donors from far away contribute to these organizations’ causes in good faith. However, they cannot keep track of the money. Many NGOs claim they use their funds to, say, promote female entrepreneurship. Instead, they ignore their stated missions and become a threat to Guatemala’s public order. Socialists have created or taken over some of these organizations, such as CODECA, which organizes protests and roadblocks against development in rural regions. CODECA steals electricity from the national distribution web using illegal connections and sells it to consumers at a cheaper price.

The Guatemalan government also funds NGOs. In 2019, according to local Diario de Centro América, 64 NGOs received more than US$92 million. The current legal framework lets them pretend they organize seminars and workshops with civil-society groups and think tanks when they actually promote and finance a destructive ideological agenda.

In 2013, the country’s government accountability office found irregularities in 30 NGOs that did not meet construction standards, failed to abide by their contracts, or illegally received public funds.

One Job: Uphold the Constitution

The CC is trampling on the very document it is supposed to defend. It does so to protect allies trying to impose socialism on Guatemala.

On formal grounds, the CC order to stop enacting the law is illegal because it is against an act already consummated: Congress and the president passed the bill in late February. That is, the court cannot suspend a law based on an injunction. Had the action been for unconstitutionality, the court could have granted a temporary suspension of the law.

Any argument for unconstitutionality would be bogus because the law is fully supported by the Guatemalan Constitution, which grants Congress the power to alter existing legislation and the president the power to limit constitutional rights in case of “serious disturbance of the peace, or activities against the security of the state.”

That does not imply arbitrary and draconian rule as unions, activists, and opposition parties claim. Any organization accused under the law can appeal the decision and seek relief in court.

Since the beginning of its democratic era, Guatemala’s executive branch has complied with legal rulings. It is the Constitutional Court, packed with pro-CICIG globalists, that is again overreaching and blocking the other government branches from carrying out their legal duties.

Other illegal rulings by the CC include: ordering authorities not to process legal actions against themselves; interfering in executive and legislative responsibilities; and illegally shutting down private businesses.

Far from ignoring the ruling, President Alejandro Giammattei agreed to submit a new bill correcting the issues the CC pointed out.

The court’s callous disregard for legal arguments coincides with its sinister agenda and dependence on its US partners. The US embassy tweeted its opposition to the law. The assistant US secretary of state for Western Hemisphere affairs then did likewise. Six US representatives, including the usual Democrat suspects Norma Torres and Eliot Engel, urged Giammattei to veto the bill. The transparency created by the new law could lead to disclosure of US State Department collaboration with NGOs against the policies of the Trump administration. This includes stealing the 2019 Guatemalan general election and a botched effort to derail the asylum agreement with the United States.

Even with the CICIG out of the game, lawfare still rules Guatemala—not the representatives elected by the people. If Guatemala fails to apply the law to CC magistrates, the republic risks falling into tyranny.