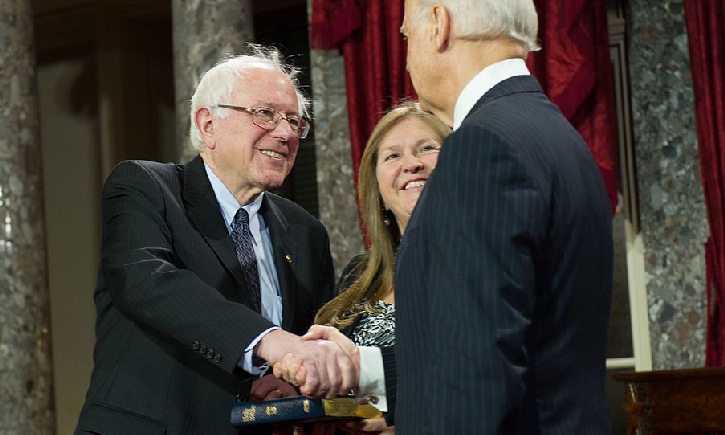 Biden and Sanders have done voters a favor by portraying themselves as the socialists they are. (Wikimedia)

Bernie Sanders told ABC news on Sunday the progressive movement has been making enormous progress in “electing candidates for district attorney, who are transforming criminal justice.”

This should be terrifying.

Sanders said at the Democrat convention “Our movement … is getting stronger every day. Many of the ideas we fought for, that just a few years ago were considered ‘radical,’ are now mainstream.”

It is now mainstream, part of the revolution, for prosecutors to protect friends and persecute enemies. Kim Gardner is Sanders’s type of district attorney. She prosecuted a St. Louis couple that defended their house by showing legal firearms to a mob that broke into the couple’s private community.

Kamala Harris was another Sanders type of prosecutor. As San Francisco district attorney, Harris refused to seek the death penalty for a gang member who gunned down a police officer with an AK-47. Both California senators, the state attorney general, and the San Francisco mayor—all progressive Democrats—opposed Harris’s position.

As California attorney general, Harris refused to stand with every law enforcement organization in the state and 55 of 58 county district attorneys against Proposition 47. It passed and released thousands of felons from prison.

On Wednesday in Kansas City, addressing the massive spike in violent crime America is enduring in 2020, Attorney General William Barr said, “I definitely feel a lot of it is due to the premature release of dangerous criminals by courts and by prosecutors.”

Imagine our Justice Department under the control of Biden and Harris!

After the Democrat establishment pushed Sanders out of contention for the nomination, he became indispensable for Biden. If disgruntled Sanders supporters were to sit out the election, as in 2016, Biden could not win.

Former President Barack Obama orchestrated the campaign to make Susan Rice Biden’s running mate. Having proved her radical credentials as a prosecutor and as the most progressive member of the Senate, according to nonpartisan GovTrack, Harris was perfect for Sanders as Biden’s running mate.

Despite Harris’s hyper partisanship, in an astounding display of media collusion with Democrats, the New York Times described her as “a pragmatic moderate.” GovTrack found no other Senate Democrat worked less with Republicans on legislation. Pragmatic moderate?

Obama twice forced Sanders out of the primaries. Obama’s participation is critical for Biden to win, but Sanders is even more important. Obama tries to hide his socialism and feign moderation because he knows the truth would hamper him. Sanders and his supporters do not care.

Obama and his voters have no place else to go, while Sanders radicals are unpredictable and must be placated. Sanders’s sincere, overt socialism beat Obama’s covert socialism, making Harris the vice-presidential candidate and likely president before 2024.

Exposing Harris’s radicalism gives Trump’s campaign and supporters an advantage they would not have had with Rice. That is the cost of placating Sanders. Obama’s main concern—ending the Durham probe—is consistent with Sanders’ transformation of criminal justice.

Democrats have left evidence hidden in plain sight of the effects of this strategy. In Guatemala, where I have lived for nearly 50 years, Obama and Biden made corrupt deals with Guatemalan officials. They placed allies of the Fidel Castro-supported terrorists in control of criminal prosecution and the judiciary.

Obama’s and Biden’s socialist officials protect gangs that destroy factories, invade private property, and deny police access to their areas. They persecute legitimate authorities for doing their job. It is little wonder authorities are hesitant to apply the law. Does this sound familiar?

Obama’s and Biden’s attorney general asked the court to dismiss charges against gang members for attempted assassination of a prosecutor despite a wounded police officer and a bullet-riddled car. Obama’s and Biden’s officials illegally keep political opponents in preventive detention for years.

House Speaker Nancy Pelosi and Eliot Engel, chairman of the House Foreign Affairs Committee, even took photographs with two corrupt, socialist judges in 2019 in a show of support before an election.

The Democrat platform, passed Tuesday, refers to the Americas: “We will work … to address the root causes of migration—violence and insecurity, weak rule of law.” The Obama-Biden policy did exactly the opposite. They promoted violence and arbitrary application of law, which exacerbated migration. This dishonesty covering criminal action is similar to calling riots peaceful protests. It discredits their entire platform.

We see what Democrats have done to cities and states they control. They have done much worse in Guatemala. Their policies would destroy the fabric of our society and lead toward a one-party state, controlled by Democrats.

Biden and Sanders have done voters a favor by showing themselves for the socialists they are. They depend on their media partners to spread the lie that Biden and Harris are moderates. Americans should not believe them, especially when the truth is in plain sight.