Obama’s Litany of Lies in Florida
Skip to content 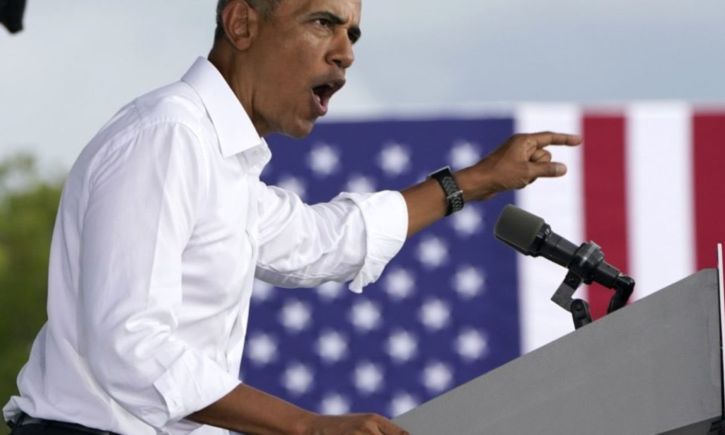 Aware of Obama’s problem with Latino Americans leery of socialism, the Biden campaign kept Obama out of South Florida. (Twitter)

Former President Barack Obama said at a campaign event in Orlando on Tuesday that the presidency does not change who you are. It reveals who you are. This was the only truthful part of his speech.

What is also true is that Obama has a vested interest in the electoral outcome. His criminal spying on Donald Trump’s 2016 campaign could lead to legal troubles for Obama and his minions should Trump win reelection and investigations continue.

It is no surprise that Obama has jumped at the opportunity to campaign in two key states in this election: Florida and Pennsylvania.

The problem for Obama and Biden is that too many Floridians can see through their lies and distortions. They see a true socialist agenda drafted in part to appease supporters of Bernie Sanders who did not support Hillary Clinton in 2016. Perhaps aware of Obama’s problem with Latino Americans leery of socialism, the Biden campaign kept Obama out of South Florida.

In a performance worthy of Fidel Castro or Hugo Chávez, Obama demonized his opposition—the key ingredient of the Marxist takedown strategy in Obama’s transformation of the United States. Obama repeated discredited stories as fact and distorted others, portraying himself and Biden as having done what they did not and Trump as evil and incompetent.

Americans of Cuban, Venezuelan, and Nicaraguan origin or descent have seen for themselves or heard from their elders how Biden’s socialist agenda is what destroyed these countries. Trump calls the 2020 Democrat platform a “manifesto.” These voters know the same policies in the United States will have the same results and leave them with nowhere to escape to.

Obama claimed Trump gave no credit to the economy he inherited. The fact is that Trump’s corporate tax cuts, reductions in regulations, and reciprocal trade deals have brought manufacturing jobs back to the United States. Obama said those jobs would not return and what was needed was more federal intervention and higher taxes.

The Biden campaign’s only focuses are Covid-19 misrepresentations and attacks on Trump’s personality. For example, Obama said Trump ignored the pandemic. Like Biden, Obama then blames all Covid-19 deaths on Trump.

Common sense tells us this is absurd. Trump assembled an impressive team of experts from many fields and factored their advice into his decisions.

The division is with regards to underlying priorities. Trump favors effective but limited government, while Obama and Biden favor larger, intrusive government.

Obama said Biden would promote human rights in Cuba by reinstating the Obama policy. This does not comport with the facts, since Obama and Biden bailed out the ghastly Castro dictatorship by providing the hard currency they desperately needed to survive. Political imprisonment spiked after concessions and the Obama visit to the island, which demonstrated his administration’s willingness to help out a socialist comrade.

Now Biden and Obama want to impose Castro’s dream on the United States. Floridians and all Americans need to know this.

Obama implied that Trump puts political opponents in jail just for disagreeing with him. As is typical with socialists, they accuse their enemy of what they do. I have witnessed Obama and his point man Biden in Guatemala—where I have lived for nearly 50 years—put their political enemies in jail without evidence and in violation of law. They do this to support Castro-trained and supported guerrillas who fought a three-decade war against the government and then morphed into the socialist party in Guatemala.

Obama talked about combating racism through progressive prosecutors. He really means heightened racial tensions and even worse identity politics. Regarding prosecutors, he was likely referring to the likes of Kim Gardner in St. Louis. She charged the McCloskey family when they were legally defending themselves. Oddly, she did not charge the gang that invaded the private community by breaking down a locked gate and threatening residents.

A Biden victory would bring this specter to all communities in the United States. Chaos is a core tactic of Castro’s Marxist revolutionaries.

Biden will speak in Broward County on Thursday. Although Hispanics should see Biden as just as toxic as Obama, Biden tries to maintain the false image of good-old Uncle Joe. He thinks he can fool enough people. His agenda should be too plain for Floridians to miss, especially those who understand the danger socialism poses to our republic.