Joe Biden’s First Test: How Long Before the Migrant Monsoon?
Skip to content 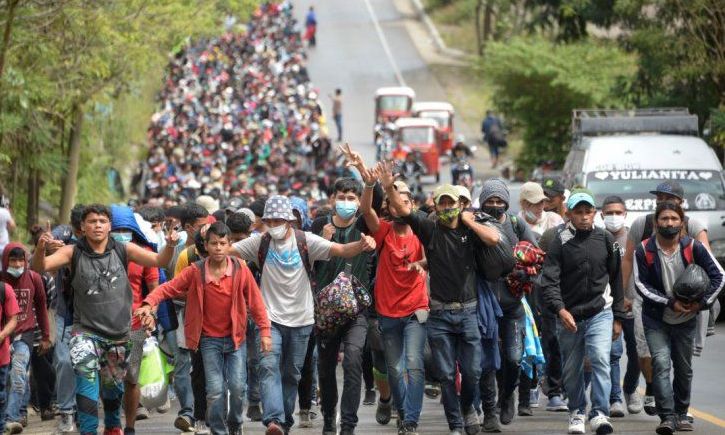 Biden must privately prevail on Guatemalan and Mexican authorities to prevent caravans from reaching the US border. (Twitter)

The latest migrant caravan that began in Honduras on January 15 failed to overwhelm Guatemalan and Mexican authorities. It tested the Biden administration’s priorities, since he wanted to avoid applying Trump’s asylum agreements with Guatemala, Honduras, and El Salvador. Instead, Biden quietly pressured Guatemala and Mexico to stop the caravan.

The caravans will continue, however, motivated by Biden’s announced immigration policies.

If Biden had permitted the migrants to enter the country, he would have satisfied his socialist base. However, it would have created conflict with those who voted for him because of COVID-19, which the migrants would spread.

Democrats and Biden have been clear throughout the campaign that they will cease deportations and grant citizenship and benefits to migrants already in the country. The Democrats must do this to win elections after Americans experience the negative results of Biden’s policies.

Along with increasing taxes and regulations, the Biden administration will reward its crony-capitalist partners—who were indispensable for obtaining the presidency—by reinstating their trade privileges with China. This will re-export jobs Trump brought back to U.S. workers.

Each element of the Biden cabal—crony capitalists, corrupt media, socialists, and government bureaucrats—must cancel or neutralize at least 75 million people who want Trump’s America-first policy to return. New immigrant voters can do this.

However, political considerations require Biden to postpone mass immigration. Biden’s campaign had only two messages: (1) Trump is evil, and (2) he mishandled COVID-19.

A COVID-19 super-spreader event tied directly to Biden would show his duplicity. Biden’s socialist base and Central American migrants, however, are fair-weather friends and want immediate gratification.

Biden announced on December 22 that he did not want 2 million people on the southern border. He said it would take six months for him to reverse Trump’s asylum agreements and execute his promised immigration policies. By then, vaccines are likely to reduce the super-spreader aspect of immigration.

Unable to convince socialists and migrants to have patience, Biden has only one way to avoid upsetting some of his base. He must privately prevail on Guatemalan and Mexican authorities to prevent caravans from reaching the US border, at least until he is ready to open the faucet as part of Democrats’ future electoral strategy.

Regardless of the caravan’s fate last week, mass migration will occur because the Biden cabal needs it to counterbalance the lost voters who disapprove of destructive policies. The legal status of new arrivals is no impediment to Democrats regarding voting. We just witnessed it, followed by undemocratic repression to impede and stigmatize any mention of election fraud. Illegal migrants will vote unless Americans become conscious of the true nature of Democrats and create mass pressure to prevent fraud.

Biden’s announcement that he will immediately offer a path to citizenship for all illegals currently in the country attracted (pulled) the now-dispersed caravan. Many others will follow. The supply has no practical limit.

Contributing to mass migration will be the push factor. Central American countries are underdeveloped because of centuries of centralization and abuse of power. Insecurity and lack of opportunity have pushed the millions of illegal immigrants now in the United States. Biden exacerbated those conditions when he was point man for Obama in Central American, and he will exacerbate them even more as president.

Guatemala is the key country because of its porous 595-mile border with Mexico. In 2014 and 2015, Biden forced an extension of a criminal UN commission (CICIG) on Guatemala. The embassy used it as a battering ram to install successors to the Fidel Castro-supported guerrillas in the judiciary and public-prosecutor office. Those officials protect armed gangs that control rural areas, especially along the country’s borders, which remain lawless and open as a result.

Former President Jimmy Morales expelled the CICIG in 2019. Without the CICIG’s big stick, the guerrilla successors were unable to impose their allies on the judiciary when their judges’ terms expired. Judicial dominance is critical to attaining complete control of the government.

The current magistrates of the Constitutional Court (CC), Guatemala’s last word on judicial matters, have impeded appointments of new magistrates. If this continues, they will likely continue to violate the law and remain in power after their term expires in April to keep from turning over the CC to magistrates the guerrilla successors cannot control.

The guerrilla successors are waiting for their partner Joe Biden to rescue them. He and Democrats have already announced they favor a new regional anti-corruption commission. In typical Orwellian fashion, they will force it on weaker countries and use it to impose their totalitarian partners.

Removing the specter of deportation will lower remittances as illegals opt not to build nest eggs at home. Reduced purchasing power in Central America, without remittances for spending and demand for local currencies, will dampen economic activity and add to the push factor.