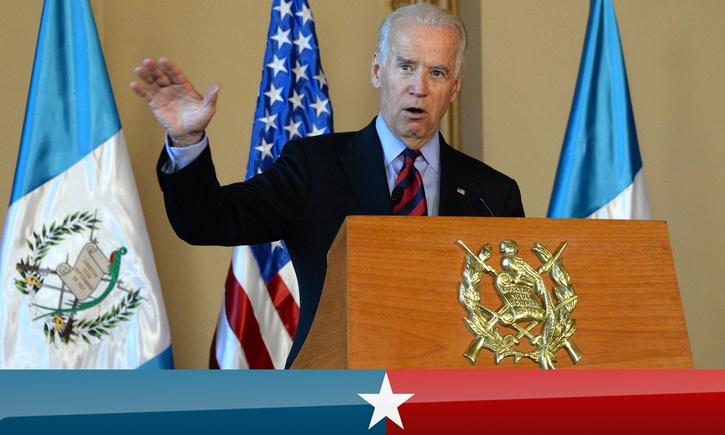 Guatemala is important for Biden’s plans to flood the country with new immigrants who will vote Democratic. (Newsat)

Editor’s note: As we were ready to publish this article, important breaking news came out.

Prosecutor Juan Francisco Sandoval presented criminal charges against magistrate Mynor Moto. Judge Erika Aifan, a notorious socialist in a lower court protected and supported by the US embassy, issued an arrest warrant for Moto. This is a criminal act because Moto has immunity, which can only be lifted by Congress.

Sandoval had presented the same charges in a case now before the Supreme Court, whose duty is to send it to Congress. Repeating the charges in this manner makes this a naked power play, far outside judicial norms, to keep Moto from taking his place on the Constitutional Court (CC).

If the police detain Moto, Aifan will deny any legal motion, of which there are many, to free him. It would effectively, although illegally, keep Moto off the CC.

The current Biden magistrates controlling the CC are accomplices to the crime. Apparently in concert with Sandoval and Aifan, they blocked Moto from his lawful post on Thursday, Friday, and Saturday. Biden functionaries Price and González are responsible for providing US support for this criminal behavior. Biden and his CC magistrates, prosecutor, and judge are blatantly destroying the rule of law to impose totalitarians on Guatemala.

The Biden regime and its crony-capitalist and media partners are promoting division and repression by illegally targeting political opponents. Those who doubt this need to examine how the regime imposes criminality on an important ally: Guatemala.

Guatemala is important for Biden’s plans to flood the country with new immigrants who will vote Democratic. As the only land route from South and Central America to the United States, Guatemala is the key country for illegal flows. Its borders are wide open thanks to Biden’s prior policies, continued by the State Department in betrayal of former President Donald Trump.

As former President Barack Obama’s point man for Guatemala, Biden leveraged $1 billion in promised aid to bludgeon the country’s then president to extend a UN anti-impunity commission (CICIG). The US embassy used the CICIG to take control of criminal prosecution and place socialists on Guatemala’s Constitutional Court (CC), its last word on judicial matters. These socialists are successors to the Fidel Castro-supported guerrillas, and with Biden’s allies they keep the country’s borders open.

Biden moved against energy in his first days in office. His CC magistrates, who routinely issue illegal rulings, have been closing hydroelectric plants and mines since taking their positions. Both squash individual initiative and foment dependence on government.

Without the CICIG, expelled in 2019, the embassy has been unable to intimidate Guatemalan officials to not oppose illegal CC rulings. Socialists now depend on comrade Biden to restore their power and complete their takeover of Guatemala.

The State Department intervention is about replacing a deceased CC magistrate, whose term ends on April 15. Guatemala’s Bar Association appointed Mynor Moto to see out the rest of the term, and Congress swore him in on January 27.

As if from an Orwell novel, Price’s statement “Promoting Fair and Transparent Selection of Justices to Guatemala’s Constitutional Court” promotes exactly the opposite. Team Biden does not want the new magistrate to take his lawful post on the CC.

As a judge, Moto withstood CICIG pressure to convict defendants based solely on coerced testimony. The prosecutor in that case was the same one who has now filed bogus charges against Moto.

All current CC magistrates finish their tenure on April 15. The process for naming magistrates for the 2021–2026 term begins in two weeks. The Supreme Court, Congress, and Bar Association have joined the fight against CC criminality. Each has an appointment to the CC, and their three magistrates would have a majority on the five-member court.

If team Biden can keep Moto from taking his lawful post, their current magistrates will be able to illegally prevent the magistrates appointed for the new term from taking their posts. This would give Orwell’s Napoleon—Biden—time to force his socialist magistrates on an unwilling population under the guise of transparency, rule of law, and mitigating migration.

González lamented the exit of the CICIG and said Biden, who strongly supported it as vice president, considers its absence “a step backwards regarding corruption.” González said Biden would create a regional commission against corruption, and the United States would sanction those it considers corrupt. With the CICIG as precedent, team Biden will sanction political opponents and protect criminals imposing socialism.

The Biden regime classifies its domestic political opponents as terrorists. Applying this attitude in Guatemala, Biden and his partners will persecute opponents who exercise their civil rights and try to properly apply the law.

The Biden regime wants to turn Guatemala into Nicaragua or Venezuela and establish that type of government in the United States. Guatemalans need to come together to resist team Biden’s imposition of socialism. US citizens need to do the same.