What Biden’s Migrant Monsoon Portends for America
Skip to content 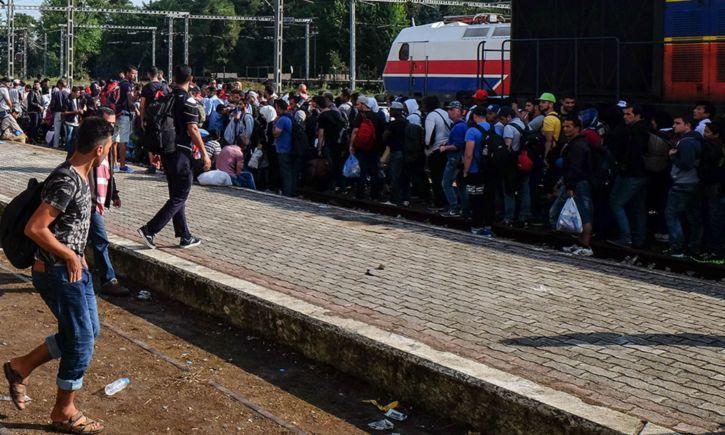 Migrants know that if they get to the United States now they will be on a path to full citizenship. (NIMD)

On March 10 at the White House podium, Roberta Jacobson, the coordinator for the southern border, echoed President Joe Biden’s promise to address “the root causes of migration from Central America.” She and Biden are doing the opposite, creating a flood of new immigrants that will significantly change the United States.

Biden’s policies are pushing migrants from and through the geostrategic country of Guatemala. It’s the only land route from South and Central America to the United States and has a porous 595-mile border with Mexico.

Biden said he would “restore humanity and American values to our immigration system.” The migrants Biden’s policies are pushing and pulling to the United States risk murder, rape, and other abuses by Mexican cartels that control movement through the country. On their way to Mexico, and ultimately the United States, migrants travel through murder-ravaged Central America. They contend with gangs descended from militias organized by Fidel Castro to foment violent revolution.

So much for restoring humanity.

Jacobson has tried to scapegoat coyotes for the crises at the border. However, Biden has induced migrants to take the perilous journey by proposing immediate work and a path to U.S. citizenship. Biden has also ended former President Donald Trump’s asylum agreements with Mexico and the Northern Triangle: Guatemala, El Salvador, and Honduras. Being unable to return the migrants to Mexico or Central America is creating bedlam at our border.

It will get worse.

Biden is continuing the Obama administration policies he spearheaded in the region as vice president. International socialists and their U.S. partners have long been working in the region to create dictatorships and maintain a robust flow of migrants to the United States.

In 2019, House Speaker Nancy Pelosi (D-Calif.) came to Guatemala to show her support for the socialist presidential candidate Sandra Torres as well as voice her disapproval of the asylum agreement reached between Trump and Guatemala. Other Democrats, especially Sen. Patrick Leahy (D-Vt.) and Rep. Norma Torres (D-Calif.), have actively inserted themselves into Guatemalan affairs in support of socialists.

I am a U.S. citizen who has lived and done business in Guatemala for nearly 50 years. That includes almost a decade of writing and reporting, even interviewing coyotes who transit illegals into the United States.

Biden is sending a clear message to potential migrants in Central America that now is the time for them to get into the United States.

Castro targeted Guatemala not only for its strategic value but also because it provided a base for U.S. military operations to remove him from power at the Bay of Pigs. After a 36-year unsuccessful attempt to overthrow Guatemala’s government and create a socialist dictatorship, the armed Marxist gangs have changed strategy. They now focus on internal subversion and dominate the border region with Mexico. Castro must be smiling from the grave.

As Obama’s point man here, Biden abused U.S. power to give the guerrilla successor’s political wing—now disguised as NGOs—control of Guatemala’s Constitutional Court (CC) and Prosecutor General Office. The CC is Guatemala’s last word on judicial matters. Biden is pushing magistrates for the CC’s next term, which begins in mid-April. Contrary to Jacobson’s words, success would guarantee a higher migrant flow.

Recently, Homeland Security Secretary Alejandro Mayorkas, the deputy secretary in the Obama administration, asked for time to prepare and said migrants should not come yet. Mayorkas is likely concerned about pictures and videos of overrun detention centers, recently renamed “Welcome Centers.” In time, the Biden regime will be able to immediately process and wave through migrants to waiting Greyhound buses.

Mayorkas’s and Jacobson’s hollow warnings and pleas for delay mean nothing to migrants who have been given a sense of urgency to move now by the administration’s policies.

Migrants know that if they get to the United States now they will be on a path to full citizenship and, most importantly, allowed to work legally immediately. The message is clear: prospective migrants can send their children now and use them later as tools to gain citizenship for the parents. If parents wait, conditions might change and the opportunity may be lost.

The passageway is wide open.

A recent New Yorker column welcomed the Biden policy and the support it enjoys from State Department lifers, U.N. leftists, and European elitists. When this coalition comes together, freedom should sleep with one eye open. The massive caravans will soon pass nearby my home in Guatemala en route to the United States.