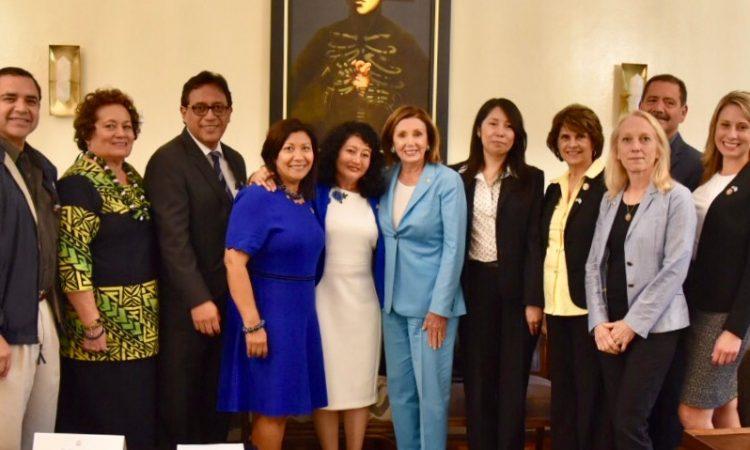 To defeat President Donald Trump, Speaker of the House of Representatives Nancy Pelosi sees the law as an obstacle to be subverted. After her Guatemala visit on Thursday, photographs showed her with two socialist activist judges and US Ambassador Luis Arreaga, who arranged the meeting.

Pelosi stated, “We were also pleased to meet… (a) courageous group: judges who highlighted the importance of an independent judiciary in fighting impunity and corruption. They… emphasized the need to uphold the rule of law to increase economic opportunities for all and to strengthen democratic institutions.”

For Guatemalans, this could have come from George Orwell’s Animal Farm.

Judges Yassmin Barrios and Erika Aifan flanked Pelosi in the photo. The two judges have made high-profile rulings in violation of the law and defendants’ constitutional rights. Barrios is infamous for presiding over trials of former military officers, whom she convicts before the trial. With indigenous “leaders” of successor groups to Fidel Castro-supported guerrillas, Barrios stated she would not criminalize indigenous people.

Forget the facts and the law; politics prevails—just like in the United States for Democrats.

In one high-profile case, a grinning Barrios saluted the cheering crowd after she convicted the defendant. The conviction, however, failed to stand longer than 10 days because the court had violated the constitutional rights of the late Efraín Ríos Montt.

Erika Aifan has jailed political opponents for representing plaintiffs and defendants against the International Commission against Impunity in Guatemala (CICIG). Judicial Watch and four Guatemalan civic groups have exposed the CICIG as criminal and ideological. The CICIG used false witnesses in its trials and coerced votes in Congress to change Guatemala’s laws.

Wall Street Journal reporting and an April 27, 2018, hearing by the Helsinki Commission—a US federal agency—led to the unraveling of CICIG’s false front of fighting corruption and impunity. The subject was CICIG conspiracy with Russian banks run by Putin henchmen persecuting a Russian family who had fled to Guatemala.

The US embassy controlled the CICIG and still controls the Constitutional Court (CC), Guatemala’s last word on judicial matters. To avoid scrutiny, the CC issued a ruling to release the Russian family two days before the hearing, which proceeded regardless.

The CC ordered Aifan to free the family, but she disobeyed the CC order. In a tortured ruling, the CC claimed she had complied, even as the family had to endure a new trial.

Chairman of the House Foreign Affairs Committee Eliot Engel (D-NY) accompanied Pelosi to Guatemala. He is pushing for the defunct CICIG to return.

In 2016, Obama’s ambassador criminally pressured Guatemalan institutions to appoint socialists to the CC. Since then, they have constantly issued illegal rulings favoring the socialist agenda. This includes granting themselves immunity from prosecution and protecting electoral-authority magistrates who have been stealing Guatemala’s elections for socialism.

The co-opted CC protects Barrios, Aifan, and other judges, permitting them to jail political opponents in violation of the law and their rights. Many accused have spent years in preventive detention.

Naturally, such arbitrary application of the law has reduced investment and harmed Guatemala’s economy, increasing the flow of illegal migrants and drugs to the United States. This is Pelosi’s purportedly courageous judiciary.

Pelosi’s stance on Guatemala is consistent with Democrat insistence that Trump conspired with Russians in the 2016 election. Once evidence began to emerge of criminal activity at the highest levels of the Obama administration to favor Hillary Clinton and harm Trump, Democrats changed from insisting on transparency to obstructing investigations into such activity. Politics prevailed over law and preservation of the US republic.

With Pelosi’s support, her comrades in Guatemala are poised to fix Guatemala’s election tomorrow for socialist Sandra Torres and thus reverse the Guatemala-US asylum agreement. Both events would guarantee more misery in Guatemala and the flow of illegal migrants and drugs to the United States.