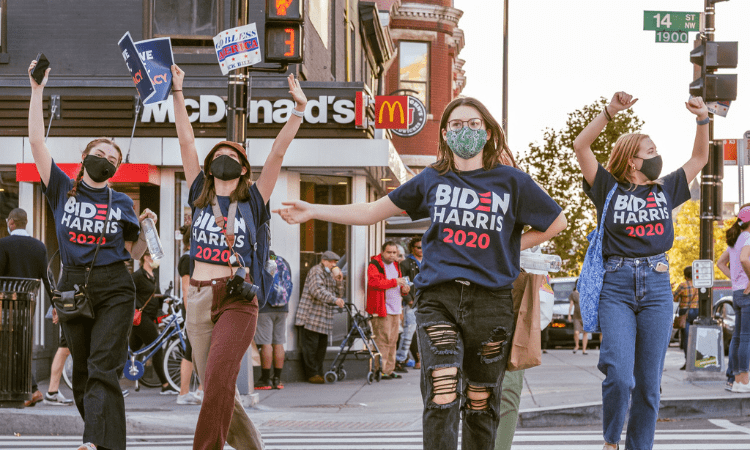 In his address to a partial joint session of Congress, Joe Biden pretended his administration is addressing the immigration crisis exploding at our border. He bragged he has tasked Kamala Harris to lead efforts to reduce migration.

Biden is playing fast and loose with the truth. He and Kamala are exacerbating migration north by supporting socialists in Central America.

Biden’s words and his reversal of former President Donald Trump’s policies of processing asylum claims outside the United States created the crisis. Biden and Harris are not turning back.  By shunning the true underlying causes, the pair ensures the migration flow continues.

Biden wants us to believe the solution is to throw money at the Northern Triangle (NT)—Guatemala, El Salvador, and Honduras—to mitigate the circumstances that drive people to emigrate.

That money will do no such thing, just as Democrats’ domestic spending is inconsistent with their stated goals. Billions of dollars to fight COVID-19 overwhelmingly went to leftist causes. The infrastructure bill would do far more to fund Alexandria Ocasio Cortez’s socialist Green New Deal and other collectivist schemes than build any bridges or roads.

Biden’s spending plans in Central America will be a slush fund to promote socialism in the NT. Almost none of the money will go to its stated purpose of reducing migration.

In Guatemala, where I have lived for nearly five decades, the money will go to socialist NGOs. They morphed from the Fidel Castro-supported guerrillas after the 1996 peace accords that ended a 36-year attempt to overthrow the government. With support from Biden, when he was Obama’s point man for the NT, the socialist candidate nearly won the last two Guatemalan presidential elections.

Remember Obama and Biden’s Cuba policy? It is back in Central America, and it points to Venezuela-style disaster on the US backdoor.

In Guatemala, the Biden policy has resulted in the 595-mile border with Mexico being lawless. Illegal migrants and drugs flow freely from South and Central America into Mexico and on to the US southern border. Biden’s reversal of Trump’s policies is a boon for criminal cartels.

Guatemalan President Alejandro Giammattei, who defeated a socialist candidate, met virtually on Monday with Harris for about 10 minutes. They had a boilerplate discussion and agreed to an in-person meeting in June in Guatemala.

Harris also met the next day with so-called community organizers. She said the organizers had invaluable knowledge of Guatemalans and of what works and what does not. That is true, for socialists.

Socialists demonize their US opponents as racists and their Guatemalan opponents as corrupt. Socialists are what they accuse their enemies of being. The Guatemalan prosecutors and judges the Biden regime favors have public records of corruption.

Progressive elites in the United States understand Guatemala is a key country for the achievement of their socialist aims at home and throughout the region.

Trump saw the money flowing from US taxpayers to the NT and demanded those countries help stem immigration or the money would stop. Trump got what he wanted.

Biden and Harris have turned the spigot back on. Money is flowing south as people head north.

Judicial Watch identified in 2018 more than a dozen organizations in Guatemala that received money from both USAID and George Soros’s Open Societies Foundations. The most influential of them is the Myrna Mack Foundation and its president Helen Mack. Mack is a frequent visitor to the US embassy—visibly close to the last four ambassadors—and a leader of the effort to impose a corrupt socialist dictatorship.

The tragic flow of US tax dollars to Mack’s collectivist initiatives merits tracking.

Biden visited Guatemala four times as Obama’s point man. He brags about having secured $750 million per year for the NT. Hardly any of that money created productive activity; rather, it went to the NGOs working to impose socialism. Biden leveraged this money to take over Guatemala’s judiciary and Prosecutor General Office.

Rather than mitigate the conditions that drive migration, as promised in his address on Wednesday night, Biden’s imposition of corruption and socialism on Guatemala will decrease opportunity, increase violence, and promote migration. Combine that with the reinstatement of asylum-claims processing in the United States and the Biden NT policy will result in millions of new migrants.

To understand the Biden-Harris NT policy, Americans should view it in conjunction with HR-1, approved by the House and now before the Senate. As soon as Biden was done talking about the NT in his address, his next line was about the urgency of passing the bill and sending it to his desk.

The bill prohibits electoral authorities from asking for voter ID. All those immigrants currently descending upon the key state of Texas in 2024 will, if the bill passes, be able to vote without hassle.