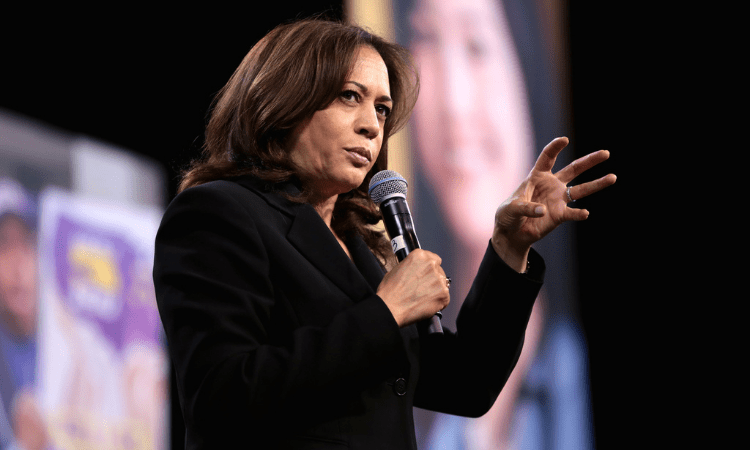 Continuing with Biden's policy would confirm that Harris is pushing for migration to increase the Democratic vote. (Gage Skidmore)

Kamala Harris has outdone George Orwell by praising three former Guatemalan officials as leaders “who have spent their entire careers fighting for justice in Guatemala.” All three are in exile in the United States avoiding prosecution because of the crimes they have committed in positions of public trust.

The White House released a photo of Harris with Claudia Paz y Paz, Thelma Aldana, and Gloria Porras. The first two are former prosecutors general, the latter was a magistrate of Guatemala’s court of last resort. The photo and Harris’s statement are a clear message to Guatemalans that the Biden regime wants to impose criminal socialists on them. Unless Harris does a complete about face, she will fail in the Northern Triangle of Guatemala, El Salvador, and Honduras.

Prosecutors When It Fits the Socialist Agenda

As prosecutor general, Claudia Paz y Paz, from a large guerrilla family, issued illegal instructions to prosecutors. She ordered them to specify to judges in petitions for evictions from illegally occupied property how much time the invaders needed to abandon the property. The law states property invasions are flagrant crimes that all prosecutors, police, and judges must end immediately. The written order is proof of the crimes and is a reason Paz y Paz failed to achieve reappointment despite significant US pressure in her favor.

The prosecutor general’s special branch for crimes against prosecutors, police, and judges asked the court to dismiss the Aguilar case. They said no crime had occurred despite a car ridden with bullet holes and a gravely wounded policeman. Aguilar later found a witness who swore under oath he observed CUC Coordinator General Daniel Pascual offer Byron Tello $7,000 to assassinate Aguilar.

The witness added Pascual told Tello the CUC “had much power inside the government.” Nothing ever happened to Pascual. Paz y Paz then transferred Aguilar to a CUC stronghold, where her life would be in danger. On radio, Aguilar said Paz y Paz was setting her up to be assassinated, and Aguilar later resigned.

Aldana succeeded Paz y Paz as prosecutor general despite the UN anti-impunity commission, the CICIG, having earlier called her unqualified and corrupt as a candidate for Supreme Court magistrate. After Aldana ascended to the Court, the CICIG put her on a list of corrupt judges.

Biden Got the Ball Rolling

Joe Biden leveraged $750 million per year for the Northern Triangle to extend the CICIG, Biden’s criminal battering ram. He used the US-backed CICIG to co-opt Aldana, leveraging the dirt they had on her. Faced with the choice of CICIG persecution or prosecuting President Otto Pérez, who appointed her to protect himself, Aldana threw her patron under the bus. He has for almost six years been waiting in jail for a trial.

Aldana continued illegal prosecutions Paz y Paz had begun, and she also took care of herself. With all her illegal activities and despite US support, Aldana had no hope of reappointment. After she left office, Congress appointed a commission to report on Aldana’s official purchase of a building for about $4 million. The Finance Ministry’s auditing arm reported to the commission the building was worth about $2 million.

Congress filed a criminal complaint with the prosecutor general. Besides the inflated value, the building lacked the legal conditions for government purchase. A judge issued an arrest warrant for Aldana, but she fled to the United States.

Former US Ambassador Todd Robinson threatened members of Guatemala’s Congress with visa revocations and CICIG prosecution if they did not vote for Porras to be appointed to the high court. She won 145-6 in a multi-candidate field. In the documentary, From Hillary With Love, former Congressman Fernando Linares explains: “Magistrates have told me, [Porras] tells them what she wants them to do and how to vote, since she has the support of the US ambassador.”

The Economy the Victim

Twice Porras has ruled in cases to which she was a party. She has made numerous political rulings, illegally closing factories and protecting groups like the CUC that invade private property, destroy factories, and force inhabitants to commit crimes against authorities.

After the high court illegally closed two hydroelectric plants in 2017, the American Chamber of Commerce stated, “We are in a period of radical ideological movements by social-conflict groups, with distortions and open opposition to any investment project … This has led to vandalism, damages, disturbances, illegal seizure of private property and loss of life… As a direct result of the [high court’s] rulings, more than 445,000 jobs and more than $780 million in annual tax revenues are at risk.”

Paz y Paz, Aldana, and Porras have contributed more than anyone to the lack of opportunity and the violence in Guatemala—the root causes of the migration Harris says she seeks to mitigate.

Despite serious complaints against each and their public records of criminality, Democrats and their media partners have embraced three former Guatemalan officials as heroes. More than sufficient evidence exists for all three to be in jail instead of being honored by the White House.

By treating Guatemalans with open disrespect and supporting the same type of corrupt officials in office, Harris will exacerbate the flow of illegal immigrants to the United States.