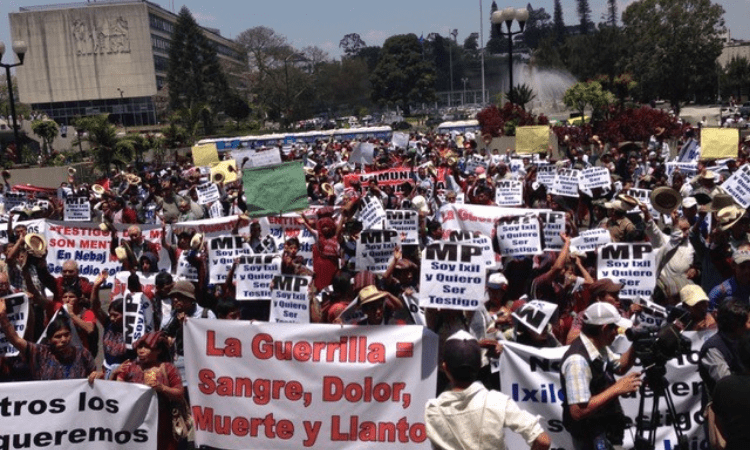 The cabal and their judges ignore the many crimes committed by the guerrillas against indigenous victims. (Steven Hecht)

DOS this year lost control of the CC and Prosecutor General Office with the departure of CC magistrate Gloria Porras and special prosecutor against impunity Juan Francisco Sandoval. Both have long records of criminal actions in furtherance of DOS’s agenda.

DOS’s cabal includes successors to the guerrillas from the internal armed conflict (1960–1996) and mercantilists who have submitted to DOS. After failing to overthrow the government by force, the guerrillas signed peace accords and morphed into a network of NGOs with financial support from DOS and European governments. DOS abused power to place its people in key positions of government. Porras and Sandoval were among the last of these.

DOS has openly led the imposition of criminal socialists on Guatemala. US officials routinely try to undermine President Alejandro Giammattei and Prosecutor General Consuelo Porras. Porras recently gave a list of Sandoval’s crimes. A judge has just issued an arrest warrant for Sandoval for illegally removing confidential information, which he has publicly admitted.

An extradition request would put DOS in a difficult position. DOS has given Sandoval overt support, despite numerous complaints against him.

If the United States were to extradite Sandoval back to Guatemala, his conviction would discredit DOS and the rest of its cabal and interfere with their socialist dream. If the US federal government refuses, it will have to explain its violation of a treaty it uses to extradite narcotraffickers.

The charge is that these two men led the killing of Ixil indigenous people. Cabal members and their supporters complicate the matter to confuse the public, but it is not complicated. Genocide must include the intent to eliminate a group. Ixils served during the time at issue in Guatemala’s army and in the civilian defense patrols (PAC), armed and trained by the army. This proves there was no intent to eliminate the Ixils and that, by definition, there was no genocide against them.

The history of the genocide claim makes clear the current charge is a political gambit.

The cabal and their prosecutors and judges ignore the many crimes committed by the guerrillas against indigenous victims. These crimes were a reason for the formation of the PAC, which had close to 1 million participants. The guerrillas were the enemy of Guatemala’s indigenous people, and the PAC forced the guerrillas to lay down their arms and change strategy to subvert the government from inside.

Former Prosecutor General Claudia Paz y Paz, placed in office by US Ambassador (2008–2011) Stephen McFarland’s criminal intervention, brought the genocide charge in 2011 against former head of state Efraín Ríos Montt. The proceedings were riddled with contradictions and illegal rulings and actions. The CC ordered trial judge Barrios to return the case to a pre-trial stage.

In defiance, Barrios held the trial. The tribunal she led convicted Ríos Montt, and the CC overturned it a few days later.

The case could not have been brought or litigated without DOS leading the effort. US Ambassador (2011-2014) Arnold Chacon attended a critical session of the trial. Former Secretary of State John Kerry praised Barrios for her role in it, despite declassified State Department cables showing no genocide had occurred. None of the annual UN human rights reports from 1983 through 1997 nor the UN ombudsman mentioned genocide.

However, when referring to the trial, the US embassy issued a statement: “We exhort all Guatemalans to respect the legitimacy and integrity of this process.”

Prosecutors later tried to revive the case, but the state forensic examiner declared Ríos Montt medically unable to defend himself. The prosecutors tried to continue the trial with a stand-in for the defendant, a legal absurdity the judiciary denied.

Since they could no longer pursue Ríos Montt, the DOS cabal needed new defendants, regardless of facts and law. DOS could have obtained an illegal conviction against Lucas and Callejas while it controlled the CC between 2016 and 2021. It likely did not because DOS did not expect to lose control of the CC and criminal prosecution, and it did not want more attention on Guatemala that could expose its perfidy, especially during the Trump administration.

With the socialist agenda now in jeopardy of exposure and collapse, DOS is cornered. Having already issued a ruling that genocide occurred, Barrios is obligated to recuse herself. Unless she knows the case will go to another corrupt DOS judge, such as Pablo Xitumul, Barrios will not recuse herself. She knows any impartial judge would quickly dismiss the case on many grounds.

If Consuelo Porras acts to shut down the prosecution or the CC overrules Barrios, DOS and the Biden regime’s media partners will aggressively attack both Consuelo Porras and the CC as corrupt and repressive. Facts and law are irrelevant; only politics and power matter to the DOS cabal.