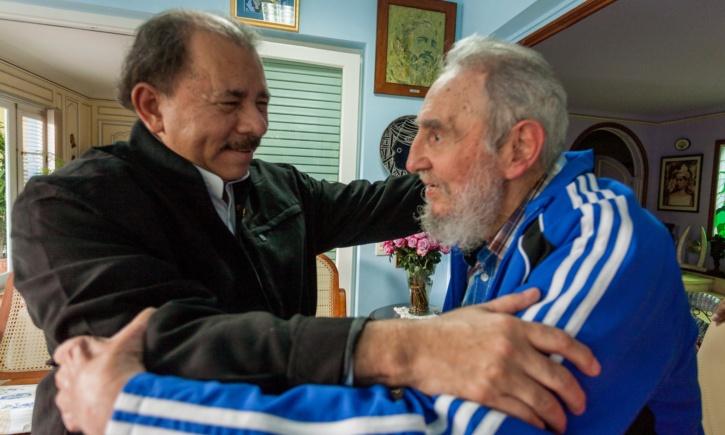 With help from Havana and Caracas, Ortega has been running circles around State Department strategists. (Cubadebate)

The collapse of governments in Iran, Nicaragua, and Afghanistan in 1979 led to regional and international chaos. Over 40 years later, those countries remain challenging spots for their neighborhoods and the world.

These conflicts have since produced several wars and are responsible for over 2 million deaths, several million displaced refugees, and grievous human-rights atrocities. Ironically, all three regimes collapsed under the watch of the US president whose chief foreign-policy agenda was the defense of human rights: Jimmy Carter. In Iran and Nicaragua, then longstanding US allies, the revolutionary forces of chaos prevailed with Carter’s approval.

Unlike Iran and Afghanistan, Nicaragua has been mostly out of the news since its civil war ended in the 1990s. However, last month, a far more parasitical version of the same Sandinista regime that Carter endorsed in 1979 was “reelected” in another fraudulent exercise. Canada, the United States, most European regimes (even the socialist ones), and many in the western hemisphere have condemned the fraud.

After losing the presidential election in 1990, Daniel Ortega returned in 2007. Back then it was unconstitutional for Nicaraguan presidents to be reelected. That the 2021 fraud was Ortega’s fourth consecutive election summarizes how things have turned out. Ortega has now been in office longer than Anastasio Somoza García, the founder of the dynasty Carter helped Ortega to overthrow.

Nicaragua has a long history of violent and corrupt caudillos. While tiny and neither Iran nor Afghanistan, Nicaragua’s geostrategic value is high. The Sandinistas have recently given a Chinese company the rights to build an interoceanic canal three times the length and twice the width of the Panama Canal.

Over and above each administration, they implement foreign policy. Given that Nicaragua has largely been off the world’s radar, US presidents have not declared deviating strategies. The vital interests there remain as they have been: the maintenance of regional peace and security and the promotion of development and democratic culture.

However, with help from Havana and Caracas, Ortega has been running circles around State Department strategists even before his return to office in 2007. State seems to have often given Ortega a pass for saying things they wanted him to say while he kept up his anti-Yankee rhetoric, even while on US soil.

Ortega cooperated with key US policy initiatives when they benefitted Ortega. He signed on to any program in partnership with US agencies designed to fight poverty, favor property rights, advance human rights, promote free trade, maintain hemispheric security, fight narco-trafficking, advance democratic institutions, and help economic development—if there was money attached to it.

Meanwhile, Ortega lived in confiscated luxury properties, cheated on elections, trampled human rights, concentrated all mainstream press in his family’s hands, and undermined hemispheric security by cozying up to China and Russia. He also turned a blind eye to or helped traffickers, systematically dismantled the precarious democratic institutions he inherited in 2007, and persecuted and imprisoned all credible opponents.

Ortega boosted trade while ruling over the second poorest country in the hemisphere. He remilitarized his country and its institutions, politicized the police and armed forces, and created extra-official armed gangs (with no dedicated shirt color) to intimidate and murder citizens. At least three high-potential presidential rivals have suddenly and mysteriously died nearing election cycles since 2006: Herty Levites, Alexis Arguello, and Antonio Lacayo from heart trouble, suicide, and a helicopter accident, respectively. A recent crop of nearly 20 potential rivals are political prisoners today. Their status is unknown.

In essence, Ortega largely secured the goodwill of the State Department by saying what they liked while doing the opposite—and he has generally gotten away with it.

It is not that he duped them. Almost every report coming out of State (or Congress) points out many of Ortega’s failings. However, the critiques quickly move to excusing his failures, which are also theirs, by pointing out that he is not an Ayatollah, a Taliban, or a Castro. He likes free trade, they say. He is just a populist helping the poor. At best there has been ongoing jousting of words between the two countries, pleasing their domestic audiences, with no practical value.

All this is not to say that US Marines should have landed in Nicaragua several times over since 2007. Nicaraguans are ultimately responsible for yet another homegrown tyrant. However, on the preservation of stability and advancing democratic culture, the US State Department has failed in Nicaragua. It has been outplayed by a tinpot dictator despite the current sanctions.

Such sanctions come too late. The Ortega-Murillo regime has achieved a choking grip on the country. The façade of dialogue with opponents after his so-called reelection is wafer-thin as the kidnappings of opponents and the persecution of the independent press continue. Ortega-Murillo risk plunging the country into another civil war, destabilizing the whole region again and hurting tens of thousands more.

US foreign policy has been unable to prevent the thuggish Ortega-Murillo clan from returning the tiny country to pre-1979 conditions.