Biden Still Eyes Dictatorship at All Costs
Skip to content 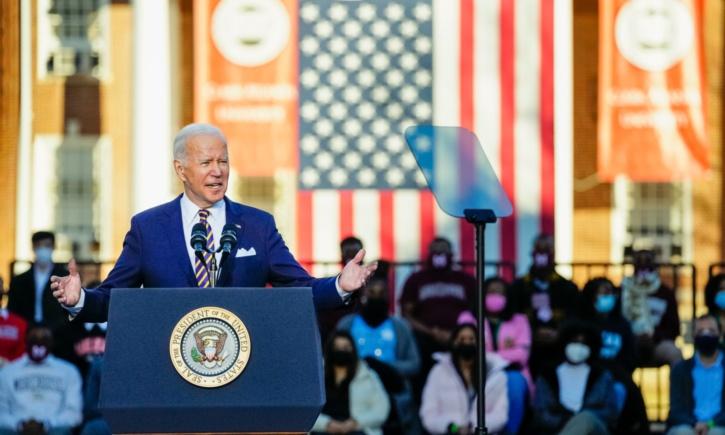 Biden’s January 6 and 11 speeches contained a typical Marxist tactic: accuse the enemy of what the Marxist is and does. (The White House)

Almost three years ago, former Vice President Joe Biden announced his candidacy for president: “We are in the battle for the soul of this nation.” I wrote, “There is a battle, but his side represents the end of the nation as we know it.”

On the anniversary of what he calls an insurrection, Biden tweeted, “We are in a battle for the soul of America.” Now in the White House, he is implementing his plan to dismantle the last constitutional limits on the executive and on Democratic Party control of the federal government.

The host of a Fox News late night show, Greg Gutfeld, said Biden’s tweet “implies a good side and a bad side … with two teams … and if you’re watching this show and you like this show, you’re probably on the bad team.”

Biden removed any doubt in his January 11 speech in Atlanta. While shamefully and angrily promoting Democrat voter fraud, Biden made clear that anyone who opposes his radical agenda is a “domestic enemy.” The targets, including news organizations, should be concerned the regime will persecute them and ignore constitutional protections.

Biden’s disdain for his political opponents is manifest throughout his regime. The Justice Department has pledged to act against parents who think they should have a role in their children’s education, calling them domestic terrorists. The regime criminalizes millions of Americans who supported peacefully petitioning their government after the 2020 election because of a tiny minority who committed crimes on January 6, 2021.

Biden’s Defense Department applies the same criteria to change the military’s loyalty, from the US Constitution to the regime. To purge political opponents, the regime imposes racist critical race theory and unconstitutional, unnecessary vaccine mandates, dividing an organization whose mission requires unity.

The Democratic Party’s desire for dictatorial power is manifest. The House has passed a likely unconstitutional act to give Washington, DC, statehood and introduced an act granting statehood to Puerto Rico. Passage would mean four new Democrat senators. Biden has also created a commission to justify adding new justices to the Supreme Court and permit Democrats to pack the expanded court.

The electoral effects of Biden’s policies’s negative results terrify Democrats. Voters will hold Democrats responsible for open borders, increased crime, excessive spending leading to inflation, and authoritarian vaccine mandates that are ineffective. Closing the Keystone pipeline and supporting Nord Stream—a gas pipeline between Germany and Russia—harms the United States and helps Russia. The disastrously managed Afghan withdrawal has empowered China, Iran, and Russia, causing us damage that will be difficult to recover from.

Understanding they cannot win a free election this year, Democrats are desperate. They can foresee their lies and subversion becoming public and their lunacy of gender and identity politics being exposed as anti-American collectivism. Democrats and their media partners have, ironically, begun saying their loss would be the end of democracy.

For a year, Democrats and their media partners have portrayed the trespass of the Capitol as an insurrection. This is another false narrative, like Trump-Russia collusion, intended to demonize the enemy. Biden uses it to persecute political opponents, and Democrats now use it to push for their voting fraud act, for which they must eliminate the Senate filibuster.

I wrote in 2019, “The attitude of moral superiority and contempt for opponents underlying the Obama administration’s domestic abuse of power produced an even more frightening result in Guatemala. Obama’s team had free rein and didn’t bother disguising their criminal abuse.”

The point of the article was that Biden’s poisonous legacy, as Obama’s point man in Central America, could come back to haunt him.

However, with his media partners and Justice Department burying Biden’s and his son Hunter’s crimes, they are above the law. Instead, the Guatemala experience was a predictor of what was to come at home. Team Biden is eliminating obstacles to its unrestricted abuse of power and trying to impose a dictatorship.

Biden’s January 6 and 11 speeches contained a typical Marxist tactic: accuse the enemy of exactly what the Marxist is and does. The real subversives are totalitarian Democrats and their partners.

With no positive policy successes, the Democratic Party’s only way to maintain power is through electoral fraud and eventual destruction of our constitutional republic. Pay no attention to their words. Focus on their deeds. Individual rights, due process, and rule by the people are obstacles to the Democratic Party’s imposition of a minority, elitist agenda on a population that rejects it.

Guatemalans in 2021 pushed back against Biden criminality. Biden’s people are openly bullying Guatemala’s government and supporting criminals there. As in Guatemala and elsewhere, Biden’s regime will not retreat. It must be stopped, which requires recognizing its true totalitarian nature and becoming involved to protect liberty.