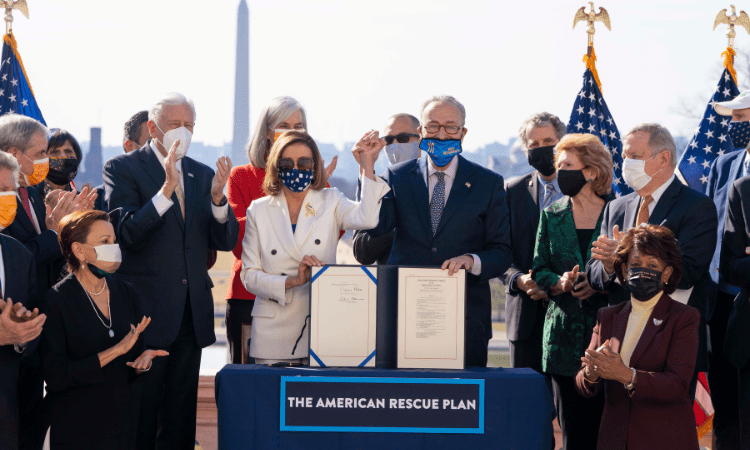 Democrats have become the party of totalitarianism. (Wikimedia)

Democrats have become the party of totalitarianism. A vote for any Democratic Party candidate is a vote for tyranny, regardless of any candidates’ assertions of independence from Joe Biden, Charles Schumer, and Nancy Pelosi.

Democracy depends on the rule of law. Democrats have politicized justice as never before in our history. The Justice Department (DOJ) and FBI persecute political opponents and protect their allies and leaders regardless of evidence or law. This is standard procedure for tyrannical governments throughout history.

The Biden regime could be the most dishonest executive in our history. They can lie as they do because their media partners promote their propaganda and suppress the truth. The Missouri v. Biden lawsuit is revealing the regime colludes with and pressures media to censor news.

The FBI acted on behalf of Biden in the 2020 election by suppressing the Hunter Biden laptop story as Russian disinformation. The evidence indicates Joe Biden has been active in foreign influence peddling that gives foreign adversaries leverage over him. The DOJ protects Biden, as do congressional Democrats and their media partners.

Corporate America—the owners of most of the legacy media—and Wall Street have sided with Democrats because America-first policies reduce their profits from China. Therefore, Democrats can substantially outspend Republicans in campaigns despite their unpopular policies that have produced chaos, violence, and inflation.

The Chinese Communist Party’s (CCP) hybrid of capitalism and totalitarianism creates little and depends on forced transfer of technology and espionage to keep up with the United States. This unsustainable arrangement cannot survive unless our government becomes like China’s.

China permits US companies to reap excess profits from labor without rights and some outright slave labor, like the Uighurs. In essence, the CCP pays our oligarchs to betray us. Peter Schweizer details this in Red Handed: How American Elites Get Rich Helping China Win. He shows how the CCP provides former and current high officials from both parties incentives to promote their agenda.

Former President Donald Trump knows China cannot compete with us on a level playing field. His policies that favored Americans are why the oligarchs and federal bureaucrats teamed up with the Marxists who control the Democrat party to remove Trump from power.

Globalists squeeze out small businesses, the engine of our economy. They exploit cheap foreign labor, while making people at home dependent on government largess. To continue this, globalists must deprive us of our individual liberties and suppress the truth. Their goals and methods coincide with those of the CCP.

In an attempt to maintain their power, Democrats and RINOs call America-first Republicans extremists. That demonizes anyone who believes in timeless American principles: liberty, rule of law, and free, competitive markets. Without oligarch money and regime media, Democrats would win no elections with their current policies.

Voters should not be deceived by Democrats who claim independence from the party. The Biden puppeteers use oligarch money to threaten with primary challenges any Democrat who strays from the party line without permission. They have permission from party leaders, for electoral purposes, to lie about their independence, but not to vote independently. If such candidates were telling the truth and believed in liberty, they would leave the party, as Tulsi Gabbard did.

In Florida, for example, Democrat Representative Val Demings is running against Republican Senator Marco Rubio. She uses her police-chief experience to claim she is a “tough-on-crime leader who knows how to keep our communities safe.” Demings has voted 100 percent with Biden. Democrats have proved they are anti-law enforcement and pro-crime throughout the country. Demings has shown she will not buck party dogma at voting time.

Democrat Corinna Robinson is running for the US House in Florida’s 21st district against incumbent Brian Mast. She claims she wants investment for small and family businesses. This is counter to Democrats’ favoring their oligarch partners, so it is just words without substance.

Candidates who promote current radical, antiliberty Democrat policies and lies will soon find that does not work. For example, Christine Olivo promotes a pathway to citizenship for all immigrants. Annette Taddeo on her website calls climate change an existential threat, fails to mention law enforcement, and says January 6 was a threat to democracy.

Olivo and Taddeo are running against incumbents Mario Diaz-Ballart and Maria Elvira Salazar in Florida’s 26th and 27th US House districts, respectively. Salazar told the Faith and Freedom Coalition conference, “We (Hispanics) come to America to escape tyranny, not to bring it with us.”

Democrats represent tyranny. America-first represents liberty, which is a large tent in which debate on policy is healthy and normal. We must now focus on and defeat the tyrants’ anti-American totalitarianism so that we can return to normal debate and the principles of liberty.