Obama, Hillary, and the New York Times versus Donald Trump
Skip to content 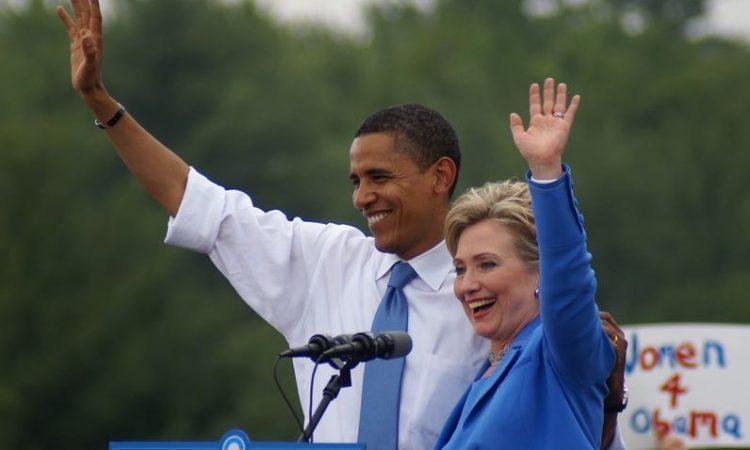 Progressive-media fear mongering hides that Obama and Hillary have more in common with tyrants than Trump. (Marc Nozell)

An English music critic, using all the pleasant contempt to which his station entitled him, once wrote of an Italian tenor in Carmen that the singer’s French pronunciation “has to be heard to be believed.”

The same statement, in the same spirit, deserves to be made about a New York Times article that sounds the death-knell of journalistic fairness — and blames Donald Trump for causing it.

The article, entitled “Trump Is Testing the Norms of Objectivity in Journalism,” appears on the front page of the Times’s August 7, 2016 issue. By tradition, the front page is for straight news while opinions belong on the editorial page. But the Times editors apparently believe that their opinions now have the status of fact.

We won’t burn time quarreling with the Times piece. Nor will we try your patience by quoting from it. You may see as much of it as you like by entering the title in your search-engine.

For us, the main interest of the piece is what lies behind it: the idea that Trump’s candidacy is a dictatorship in embryo.

Democratic Party media, led by the Washington Post, have spent months drilling this idea into their audiences. In his speech to the Democratic convention, Obama mortgaged the prestige of his office — such as it is — in calling Trump a “home-grown demagogue.”

Clinton’s acceptance speech expanded the claim, making it a central theme of her campaign and driving it with her special heaviness.

Now, by means of its front-page editorial, the gray lady has moved this idea a crucial step further. In the name of journalism itself, the Times has taken off the gloves. The Marquis of Queensbury rules no longer apply to coverage of this campaign. Trump and his supporters are the enemy, and the enemy deserves no mercy.

Let’s pause for a moment and get the gremlin off of Trump’s back. The New York Times is well informed about dictators. Over decades, it has lent its editorial and journalistic prestige to some genuine monsters. Even today, the Times is trying to live down its crucial early support for Stalin and Castro.

With all that, and their present hysteria over Trump, the Times editors ought to see a simple fact of history: you don’t just get up one day and decide to be a dictator.

The dictatorial vocation is developed over decades. It requires a lifelong, consuming passion for the politics of protest. Every successful dictator, and every aspiring one, will have this extended history in the background.

A second requirement in the school of dictators is: hold no vocation that would distract from your drive toward total power. The pure-bred dictator — Lenin, Hitler, Mao, Castro — is a drifter who haunts a lacuna of history and stalks the opportune moment.

For his part, Obama is visibly frustrated that American law and custom will not permit him to extend his stay in power. But while the American polity will not let Obama prolong his rule in time, it has given him every leeway to diffuse it in space.

Even as he is frustrated by the limits of his power in the United States, Obama has been free to look for unlimited power elsewhere. In at least one other country he has found it.

Hillary has been Obama’s partner in the overseas venture. Indeed, the proofs against her there are far more immediate than in the slippery regions of email servers or pay-for-play politics.

Overseas, the extent of Hillary’s corruption is on full view — or would be, if only our media and opinion leaders were doing their jobs.

As a private citizen, more than a year after leaving Obama’s administration, Hillary Clinton telephoned Guatemala’s president, Otto Pérez, and pressured him to reappoint her protegée, Claudia Paz y Paz, to a second term as justice minister.

Hillary had been instrumental in illegally removing the previous justice minister to make way for Paz y Paz; Hillary had then used her full power as Secretary of State to defend Paz y Paz’s subversion of the law.

Paz y Paz had immediate family ties to Guatemala’s former Marxist insurgents. As attorney general, she protected guerrilla partisans from prosecution for a wide range of violent crimes; while, at the same time, Paz y Paz made life miserable for law-enforcement officers who were trying to do their jobs.

Gilda Aguilar was the lone justice ministry prosecutor sent to a rural area under a state of siege, where she discovered that an armed militia, the Committee of United Campesinos (CUC), was forcing local peasants to take part in violent crimes directed by militia leaders.

Shortly thereafter, Aguilar was attacked by armed gunmen and barely escaped with her life. The justice ministry said that no crime had been committed and asked the responsible court to drop the case.

Aguilar was finally driven out of the justice ministry. After investigating the attempt on her life, she filed a criminal complaint against Paz y Paz. The former prosecutor also charged the leader of the CUC with having staged the attack. Aguilar’s complaint cited an eye-witness to a conversation in which the CUC leader had hired a gangster to kill her.

By the end of Paz y Paz’s term, when Clinton insisted that President Pérez reappoint her — a step the president declined to take — much of rural Guatemala had fallen under the rule of the CUC and other similar militias. Paz y Paz had used the attorney generalship to bring that about, and Clinton’s support of her had been the indispensable factor.

The Obama administration kept building on the structure created by Clinton and Paz y Paz. Today, the US embassy gives orders to the three branches of the Guatemalan government promoting these policies. The embassy’s tool is a UN “anti-corruption” commission — with effective control over criminal prosecution, including friendly judges — whose term in Guatemala has been most recently extended as the condition of a $750 million US aid grant.

The UN commission qualifies as “human-rights groups” the armed militias which hold sway over much of the countryside. The rule of these militias, by spreading misery among the populace, has increased the very illegal immigration that the US aid package was supposed to reduce.

This de facto dictatorship created and run by the US government in Guatemala, under the banners of anti-corruption and human rights, would make George Orwell, if he could see it, smile wanly.

This article first appeared in the New English Review.
David Landau contributed to this article.