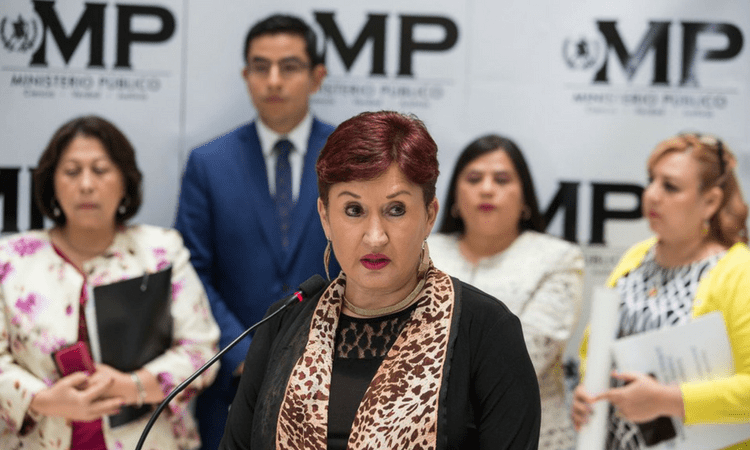 Justice Minister Thelma Aldana is seeking to select her own replacement and continue the collectivist agenda. (Noticias Telemundo)

President Donald Trump has made clear his concerns regarding Central American gangs active in the United States, but he is on the verge of missing a watershed moment. The appointment of the next justice minister in Guatemala, to take office on May 15, could significantly reduce narcotrafficking and illegal immigration.

Mexico cannot control its criminal cartels, which facilitate passage of illegal drugs and migrants from Central and South America. That makes Guatemala the key entry point to the United States. Its rural areas, especially along its porous 595-mile border with Mexico, are largely controlled by successors to Fidel Castro-supported guerrillas of the 1960-1996 internal armed conflict.

The Obama administration’s Guatemala policy, thus far unchanged by President Trump, exacerbated the lack of state presence and lawlessness. To reverse this, Trump needs to override his own State Department and support President Jimmy Morales to appoint a competent, nonpartisan justice minister.

Despite pressure from Hillary Clinton four years later in 2014, Guatemala’s nominating commission did not include Paz y Paz in its list of six candidates from which the president had to choose. Her position went to Thelma Aldana.

Obama then obtained money from Congress to use as leverage to extend the mandate of the UN-created, George Soros-praised International Commission Against Impunity in Guatemala (CICIG). The CICIG and US embassy pressured Aldana, vulnerable to corruption charges of her own, to prosecute along ideological lines.

To avoid a repeat in 2018 of their failure in 2014, the CICIG, the embassy, and Aldana attempted but failed to force changes to Guatemala’s constitution, including the appointment of the justice minister. Now the collectivist alliance faces the same challenge as in 2014, but without Obama in office.

The alliance, including the co-opted judiciary, has frantically attempted to remove Morales from office. Despite a disparaging public-relations campaign, Guatemala’s congress has rejected the bogus criminal charges.

Morales’s decision to move Guatemala’s embassy to Jerusalem likely led to his meeting with Trump on February 8, which hastened the anti-Morales campaign. If Trump were to realize that his State Department is aiding the enemies of freedom and exacerbating conditions that promote gangs, illegal immigration, and narcotrafficking, he would change the Obama policy and support Morales.

The Obama agenda has been led by holdover under Secretary of State for Political Affairs Tom Shannon. Although Shannon has announced his resignation, his replacement won’t start before the Guatemalan justice minister is chosen, because his position requires Senate confirmation. Democrats will assure no replacement loyal to Trump is confirmed any time soon.

The progressive echo chamber in Guatemala and the United States has been vociferous, repeating the spin that the CICIG and Aldana are anti-corruption warriors while their opponents favor impunity. The CICIG has led a spate of arrests, as it seeks support in the United States for the State Department to pressure Morales to appoint a CICIG-approved justice minister.

For example, the Wilson Center in Washington, DC, will host an event on March 5 with CICIG Commissioner Iván Velásquez as a featured speaker. A spokesperson will also be there for two Guatemalan private-sector organizations that have supported the Obama policy against their own country’s interests.

The US embassy has expressed interest in the selection of the new justice minister. However, it has been silent regarding the nominating commission’s many new unconstitutional requirements for candidates, including a certificate of moral solvency from the openly biased human-rights ombudsman. Apparently, the State Department approves of removing political opponents through illegalities to help its candidate win.

In recent times, Guatemala’s high-court rulings have followed the Obama-CICIG agenda. That includes the illegal reversals of Morales’s persona non grata declaration of Velásquez and of the election of congressional leadership favorable to Morales.

Before Morales can appoint a justice minister who will enforce the law and not the collectivist agenda, the high court will likely annul the process. This would leave Aldana’s recently illegally named successor in her place to continue the agenda.

This month the US embassy posted a photo of the ambassador and Velásquez together, both with signs of “I love CICIG.” After initial support for Morales on his arrival, the ambassador’s about-face confirms the orders originate from Washington, likely from Tom Shannon.

If Trump lets his State Department impose a CICIG-chosen justice minister on Guatemala, the flow of illegal immigrants and drugs will continue. With support from Trump, Morales could pick a candidate to apply the law properly, to the benefit of both countries.