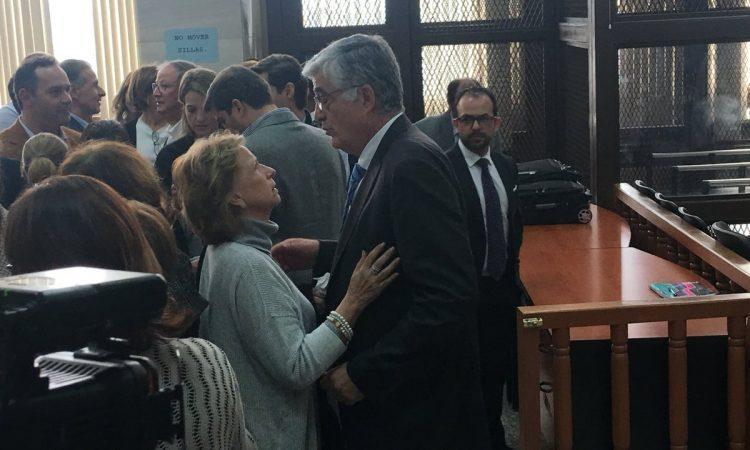 The Justice Ministry has arrested Vielmann and filed criminal charges for which he has been acquitted. (Jerson Ramos)

The UN Anti-Impunity Commission (CICIG) and their State Department enablers have revealed their vulnerability in Guatemala. So desperate are they to dominate Guatemala, they have revived a case already dismissed in Spain.

This gambit from the globalists to target former Interior Minister Carlos Vielmann is an attempt to intimidate those who might resist their agenda. They are doing whatever they can to preserve their threatened gains in Guatemala, a strategic nation in their eyes.

The Justice Ministry—under CICIG orders—has arrested Vielmann and filed criminal charges for which he has been acquitted: the alleged 2005 murders of inmates in Guatemalan prisons.

In 2017, the Spanish court found the CICIG witnesses lacked credibility and were tainted. The ruling said there did not exist “any proof of a designed plan by the government of Guatemala for physical elimination (of persons).”

The prosecution has added three new victims to justify a new trial. Constitutional Attorney José Luis González Dubón says the ploy is bogus and constitutionally prohibited. It is double jeopardy, since the events and accusations are the same.

We can be sure of the crimes, given the stellar witnesses. The prosecution’s identified straight shooters happen to be four incarcerated members of gruesome kidnapping gangs—los Pasaco and Agosto Negro—serving 50-year sentences.

Only a corrupt, politicized judiciary would accept the baseless and obviously political case. Thanks to the State Department under former President Barack Obama and former Ambassador Todd Robinson (now senior advisor for Central America), Guatemala has such a judiciary.

Since its 2007 inception, working with the State Department, the CICIG has operated behind a false anti-corruption narrative. Globalists and leftists media have maintained the façade.

The Wall Street Journal and US Congress only lifted the veil this year, as a result of CICIG abuse of a Russian family at the behest of Vladimir Putin’s henchmen. Four civic organizations also published a report about the CICIG’s history, actions, and inactions.

Vielmann is just one of many people who have fallen victim. The CICIG has coerced and bought false witness testimony; bullied judges into illegal actions; protected armed gangs that prey on the impoverished; and abused its diplomatic immunity.

The CICIG is the battering ram of the unholy collectivist alliance.

Since the 2016 US presidential election, the alliance has desperately tried to depose President Jimmy Morales to prevent him from working with President Donald Trump. Although Morales declared Velasquez persona non grata in August 2017, the constitutional court immediately and illegally overturned the decision. Morales acquiesced, but in August this year he announced he would not renew the CICIG mandate, which ends in 2019.

The high court didn’t act because Trump and Secretary of State Mike Pompeo supported Morales. Even so, deep-state actors continue to pursue Morales and undermine their bosses.

The globalists in Guatemala are at their weakest because of public awareness that CICIG is a criminal organization and scrutiny from the Trump administration. The unholy alliance can no longer count on US backing for their agenda, and they see the 2019 general elections as their chance to capture the executive branch and increase their power.

In fact, the CICIG recently signed an illegal agreement with Guatemala’s electoral authority to supervise the elections. This is absolutely outside the CICIG mandate.

Electoral authorities have been telling the country’s largest companies new rules prohibit any company trading with the government, and its shareholders, from donating to political parties. González Dubón counters that the law doesn’t say this and would be unconstitutional if it did.

The deceitful intimidation of donors seeks to choke funds for the alliance’s political opposition. It works because shareholders know the CICIG has put people in jail with no evidence and in violation of the law. US embassy and CICIG failure to publicly denounce this interference confirms their participation.

In the 2015 elections, the unholy alliance supported losing candidate Sandra Torres. The globalists continue to use her Nicolás Maduro-backed political party, the National Unity of Hope (UNE). Torres is expected to run again and was just in Washington, DC, conspiring with Robinson.

Vielmann Caught in the Middle

The Vielmann prosecution tries to send the message that the alliance is still in charge, despite Morales’s anti-CICIG actions and his support from the Trump administration. The CICIG’s abuse of power justifies immediate termination from Morales.

Although within his executive authority, such an action could lead to a crisis, including another illegal injunction by the high court. Morales could refuse to accept the ruling, which could lead to a state of siege. The stakes are enormous.

The globalist alliance is betting that Morales is unwilling or unable to confront them. If their Vielmann gambit backfires, however, it could mean the end of the CICIG, the demise of the corrupt high-court magistrates, and problems for State Department personnel who have violated the law and undermined their DC bosses.

The unholy alliance knows it must obtain executive power to survive, so they are pressing on regardless of the risk. If Morales fails to act and they prevail, Guatemala will be the next Nicaragua.

If Guatemalans stand firm and resist the assault on their liberty, the United States will have an ally to reduce the flow of illegal migrants and drugs. Guatemala will have a chance to prosper.