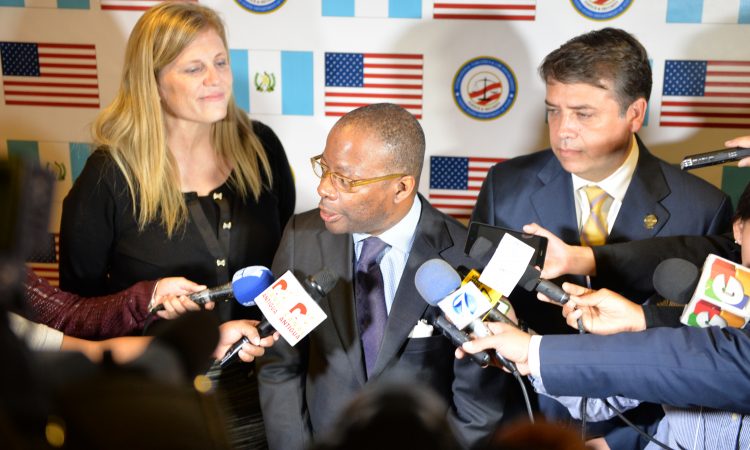 A number of US observers, including retired military and intelligence officers, have raised the question. They assert that Obama’s policy — carried out by the US embassy, by two secretaries of state, and by the first lady herself — embodies the crime of treason.

US presidents are routinely accused of treason. Lincoln was probably called “traitor” more than anyone in US. history. JFK was “wanted for treason.” George W. Bush, out of office for nearly a decade, is still being called a traitor for waging the Iraq War.

Obama has something those other presidents didn’t have. He has a legion of defenders who feel he’s in need of their protection. Obama is fond of playing the little guy. But he’s an elephant, facing an army of ants.

“Oh, yeah?” the elephant likes to reply. “Well, if you ever do that, and I happen to find out about it, you’re going to be in big trouble.”

Late last year, Guatemala elected a president that was not to the big elephant’s liking. The little elephant got the boss’s policy in gear. The Guatemalan president quickly found he could not staff his ministries with people of his own choosing.

A retired army officer had been hired by the interior ministry for his expertise in breaking up criminal enterprises — which meant he would soon be putting the guerrilla militias and their criminal structures in distress.

The ex-officer was abruptly dismissed. The stated reason was that the officer did not have good working relations with a UN commission whose supposed job is to guard against clandestine bodies like those of the guerrilla faction.

As it happens, that UN commission is the most corrupt official body in the country. It has near-perfect impunity, and it’s in bed with the guerrilla faction as well as with the US embassy — a ménage à trois of a most peculiar kind.

The dismissal of that retired officer from the interior ministry was just the beginning of a massive purge against former military commanders. The purge is now being carried out by partisans of the guerrilla movement who have gained control of the country’s justice system — and are being supported by the big elephant in Washington.

The role of the newly appointed interior minister is to protect violent organizations which the UN commission has anointed as human-rights organizations. Those armed militias pretend to support the peasants, while actually they oppress the peasants and force them to take part in criminal actions that are portrayed as spontaneous protests.

The guerrilla’s real target is the constitutional republic that it failed to overthrow. For most of its history, the guerrilla movement was steadfastly opposed by the United States. In 1968, the first US ambassador ever to be killed while on official duty was butchered by a Guatemalan guerrilla gang.

In 2009, the guerrilla faction got an enormous boost when the big elephant — a political radical who harbors sympathy for guerrilla movements — became president of the United States. In Guatemala, the big elephant has been helping the partisans of those very guerrilla gangsters who in 1968 assassinated the US ambassador.

All by itself, that last fact shows treason under the terms of the US Constitution, which specifies: “Treason against the United States shall consist … in adhering to their enemies, giving them aid and comfort.”

Along with the big elephant, how many others are implicated in this crime?

In his role as ambassador, the little elephant attended the latest trial of former army officers. In the case known as Sepur Zarco, the defendants are charged with “crimes against humanity.” The case against one of them, a former lieutenant, is very curious; its handling is better described as a crime against logic and law.

The former lieutenant is not actually accused of anything he did. He is on trial for crimes allegedly committed by men under his command; charged with allowing subordinates to rape and enslave women. The pre-trial judge bound the defendant over for trial even though the prosecution did not name the subordinates who had allegedly committed the crimes.

The chief trial judge in the Sepur Zarco case is Yassmin Barrios. Two years ago, Barrios received an award from the US Department of State — conferred on her personally by Michelle Obama — for her work in the Ríos-Montt genocide trial. Guatemala’s highest court had earlier suspended the genocide trial after Barrios flagrantly violated the defendant’s constitutional rights.

Nearly three years after the first genocide trial was suspended, the Justice Ministry is now prosecuting the genocide case under a different judge, without a defendant. The ultimate goal is for the guerrilla to be able to define the law any way the guerrilla wants — to make Guatemala a government not of laws but of a single party. And the United States, under the big elephant, is pleased to help the guerrilla do so.

The little-elephant ambassador granted an audience to the press after attending that courtroom session of the Sepur Zarco case. As the newspaper La Hora reported, the ambassador “believes that this trial is important for the country. As a judicial proceeding, it’s unique in the hemisphere. He congratulated Guatemala’s society and judicial system for considering those issues. Even so, he felt that his personal presence ought not to be taken as an effort to put pressure on the justice system.”

That sop to the press has no value at all, except as a suppressant. The truth it barely conceals is the aid and comfort his actions are providing to enemies of the United States, and of its Constitution.

It’s fun to be the elephant in the room. Isn’t it, Mr. Ambassador? But the enjoyment might be short-lived.

Closely related to the treason, an environment of treachery pervades Guatemala and indeed the United States. Under the rule of the big elephant, law itself has been degraded. The big guy and his friends are protected from the consequences of wrongdoing, while his enemies are persecuted.

This is an election year. A change in political fortunes can easily flip the destinies of all the players. The big elephant might not feel the effects, but all the little elephants probably would.

The little elephants, in Guatemala and elsewhere, have gone out on a limb to promulgate and defend criminal policies. Under a different regime, they might find themselves facing criminal charges.

So might Guatemalan officials, especially those who owe their posts to US intervention and pressure. They might begin by consulting the definition of high treason as established by the Real Academia Española: And then they might ask themselves how they would feel about facing the consequences of their actions.