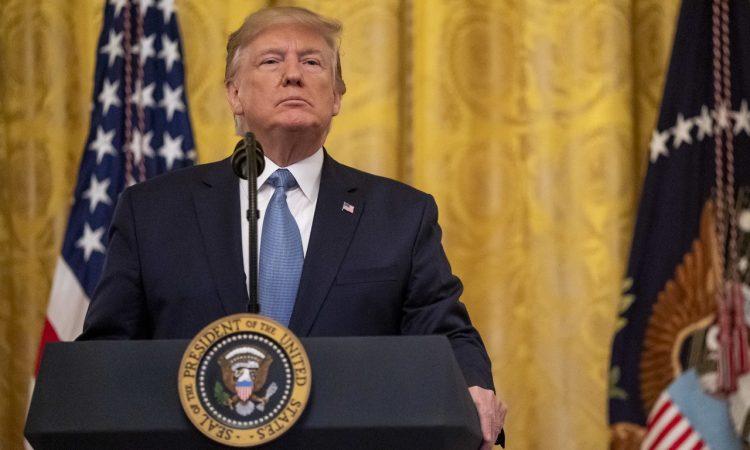 President Donald Trump has been let down by his embassy officials in Guatemala, who have favored socialist allies over their own boss. (White House)

When asked by the press on July 16 about the safe-third-country agreement with Guatemala, President Donald Trump said, “All of a sudden, they came down, supposedly, with a Supreme Court ruling that they’re not allowed to do a safe third agreement with us … I sort of wonder—did it come down because they wanted that ruling to come down?”

Trump’s embassy officials in Guatemala have let him down, since they should have explained the court action to him. They could have put it in context, but they would have exposed themselves as having betrayed their president and country.

Guatemala has two governments: the executive and legislative branches on one side, and the judiciary on the other. Violating the constitutional separation of powers, the latter has dominated the former as a result of US embassy intervention. In 2016, the US ambassador used threats of jail and asset confiscation to intimidate Guatemalan organizations to appoint his preferred candidates to the Constitutional Court (CC). Those magistrates act politically, regardless of law, to carry out a socialist agenda.

Over the weekend, the CC—Guatemala’s last word on judicial matters—issued a temporary injunction ordering the president to submit the anticipated agreement to Guatemala’s congress. The ruling is absurd and apparently intended to produce the result it has: to cancel Trump’s planned meeting with Guatemalan President Jimmy Morales.

This tactic sought to give the false impression to Trump that Morales is not allowed to sign a safe-third-country agreement. It appears to have worked, to the detriment of both Guatemala and the United States.

The court should have rejected the action because the petitioners lacked standing. An injunction is to stop a government action from harming the individual who requests it. There was no action to stop. Had the president ratified the proposed agreement after congressional approval, the CC could invalidate it if it violated the Guatemalan constitution.

Embassy officials understand this and remain silent to protect themselves from scrutiny and to protect their socialist policy from failure. Our diplomats mostly believe the large gap between haves and have-nots can only be fixed by socialism and they believe the ends justify the means to achieve this. This should not surprise Americans because Democrats, soul mates of the permanent bureaucracy, now think and act this way on their home turf.

The embassy has worked for four years to fix Guatemala’s presidential election, and there were many blatant anomalies in the June 16 voting. The electoral authorities, knowing the CC would back them, did not properly act regarding the more than 2,000 complaints. Two weeks after the election, they named the two candidates who supposedly received the most votes to compete in an August 11 runoff.

One of the two is the embassy’s candidate, a former guerrilla and vice president of Socialist International. Among her supporters is Nicolás Maduro of Venezuela.

The embassy, Democrats, and other socialist allies understand their agenda would fail and they might suffer negative consequences as a result of the agreement. Morales is a victim of their imposition and would gladly work with Trump. That is why the socialist cabal seeks to kill the agreement and keep this from happening.

US Ambassador Luis Arreaga was recalled to Washington, DC, on Sunday, the day Morales announced there would be no meeting between him and Trump. Hopefully, whoever questions Arreaga knows what to ask, and false answers result in punishment.

The socialist cabal is close to completing its takeover of Guatemala. They have controlled the corrupt judiciary for three years, and they are within three weeks of adding executive power. With that, Guatemala will become another Nicaragua. Trump would lose the chance of Guatemala being an ally in the fight against the flow of illegal migrants and drugs.

Trump needs to be briefed on what has really happened in Guatemala. He needs to know that his and Morales’s interests are convergent. Morales would give him the agreement if Trump would take control of his embassy in Guatemala and work together with the president.

If Trump and Morales sign the agreement, the CC will invalidate it regardless of the law. That is unless Trump takes control of the embassy and supports Morales in restoring law to the judiciary. There is still time to have free elections—to the benefit of both countries—if Trump can act quickly.