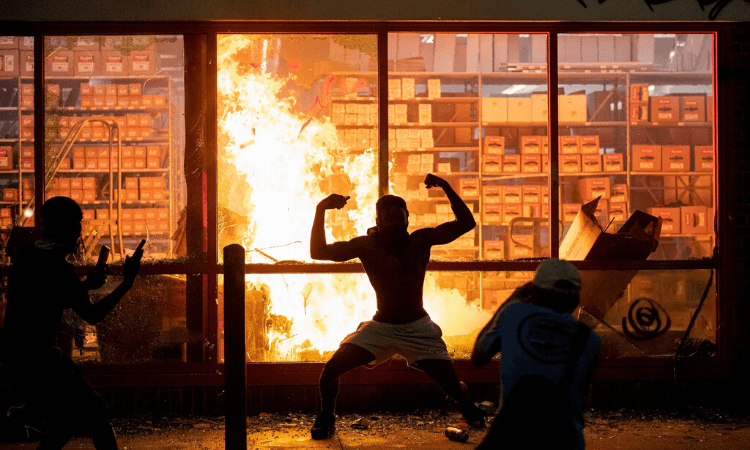 Barack Obama's plan for social revolution in America is a giant step closer to reality. (Yini)

This article was first published in the Daily Caller on August 5, 2016, at a time when Hillary Clinton was the Democratic Party’s nominee for president. In June 2020, with Joe Biden nearly the Democrat nominee, it’s notable that Barack Obama’s plan for social revolution in America—as identified in the following article—is a giant step closer to reality.

Obama’s lavish praise of the Black Lives Matter (BLM) movement—that it would “take America to new heights”—is now playing out in the streets of American cities, where BLM militants have been working with the left-wing fascist group, Antifa, to foment social disorder on a catastrophic scale.

The Democrat challenge to America’s constitutional republic is even more apparent today than it was four years ago.

President Obama’s open castigation of Donald Trump, at a White House press conference with a foreign leader present, is an extraordinary departure from American custom.

It comes at a time when Democratic Party leaders have swallowed whole the idea that Trump is an aspiring dictator.

When the producers of The Simpsons depict a Donald Trump figure sitting in bed with a volume of Hitler, one can fairly say, with Senator Harry Reid, that the word is out.

But who is the aspiring dictator? Why did Obama denounce Trump from the White House podium?

Was it his devotion to the res publica? Not if he was paying any thought to the prestige and dignity of the office. Was it out of service to a valued colleague? Doubtful; as Senator Sam Ervin said in another context, the Obama political machine is not an eleemosynary institution.

The New York Times spoke to a so-called expert who said such a thing had not occurred in 64 years.

What then did Obama’s outburst mean to the learned person?

“’It’s a reflection of just how radical and dangerous President Obama feels that Trump is,’ said Douglas Brinkley, a presidential historian.”

‘Empty and meaningless’ would be praise for such an assertion.

Even Obama’s most insensate media supporters have had to notice how manic the president has been in the twilight of his term. How likely is it that Obama’s frenzied efforts are aiming toward the marginal relevance of a post-presidency?

Not likely at all. The president is working, and working hard, to gain a third term–not merely for his policies but actually for himself.

The president is obviously clever enough to know he cannot seek a third term outright. But the media powers-that-be would be happy for him to do it sub rosa. The crucial element in this scheme is the Clinton candidacy.

Hillary is a slot machine. In pursuit of personal interests, she will do whatever it takes to please the greater powers. In office, she will enjoy the prestige of being America’s first Madame President while reprising her stint as Secretary of State–a record of service that runs the gamut from mediocre to dishonorable to scandalous.

Meanwhile, Obama will be the premier. That’s even better than being president.

Obama will put his far-from-negligible brand at the service of Hillary’s Potemkin presidency. Hillary will depend on Obama’s superior ability to manage the coalition that gives him more power than any lame duck in history. For her part, Madame President will cover for Obama as he creates a social-justice regime in the US.

Obama already has a cadre of change-makers in place: the Black Lives Matter movement. Said he: “They are much better organizers than I was when I was their age, and I am confident that they are going to take America to new heights.”

Indeed, Obama and Hillary have already shown their mettle for social engineering on a global scale.

In Guatemala, since 2010, the Obama State Department has underwritten a movement called the Committee of United Campesinos, or CUC. For the CUC’s benefit, the Guatemalan government has reduced the activity of the police to nearly zero.

The CUC and associated ‘human-rights’ groups presently rule much of the countryside with their heavily armed militias.

The militias have deposed local officials and substituted their own cadres. They have confiscated the properties of large landholders and forbidden the introduction of economic development projects that do not respect ‘indigenous rights.’

The militias have trampled underfoot the rights of ordinary people and have kept them in dire poverty. Perversely, the very militias underwritten by the U.S. have boosted illegal immigration to the U.S.

Steve Hecht, an American businessman and political analyst, is a long-term resident of Guatemala. He calls the recently-announced Black Lives Matter platform “identical” to what the CUC has been doing for years under U.S. auspices.

Dr. Armando de la Torre, the dean of graduate social studies at Guatemala’s Francisco Marroquín University, is also a US citizen. He told The DC:

“Obama is today the president of all Guatemalans, very few of whom know he is their actual ruler. The country’s president, ministers and congress take their orders from the U.S. embassy. Hillary Clinton has been a principal formulator of this policy, which is an obvious indicator of how she would like things to go in the U.S. –if only our laws and customs were to allow it.”