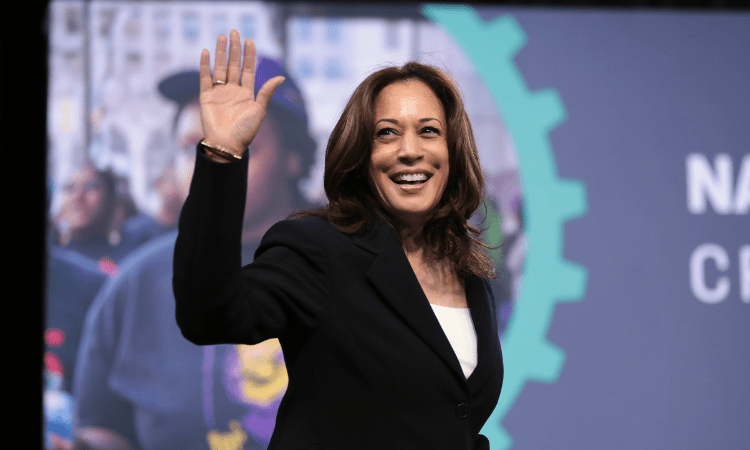 Machiavellian Biden is setting up Harris for a monumental failure. (Gage Skidmore)

Joe Biden’s handlers combined Orwellian and Machiavellian features when they had him appoint Kamala Harris to his old Obama administration role of point person for the Northern Triangle (NT): El Salvador, Guatemala, and Honduras.

Orwellian Biden said Harris, with zero experience in the area, was the “most qualified” person for the role. Machiavellian Biden is setting up Harris for a monumental failure.

Biden’s team just made the road more hazardous for her to reach Biden’s desk. Harris had no choice but to take the assignment. Had she declined, Biden’s inner circle would have leaked that Harris turned down the most pressing issue confronting the administration. That is not the stuff of presidents, even for Democrats, and would have made her look weak.

They tossed her a grenade she could not throw back.

Biden’s Surrogate Falls on a Sword

Immigration has become the most important electoral issue, and the Biden regime is pretending it is not purposefully flooding the country with migrants. Harris is trapped. Further complicating her job is Biden’s history of promoting migration while telling the public the opposite.

More challenging is undoing the mess Biden and Democrats have made of the NT.

Biden brags about having secured $750 million for the NT to mitigate conditions promoting migration during the Obama administration. Almost none of that money went to creating productive activity. Most of it went to conflict groups descended from the Fidel Castro-supported guerrillas.

In Guatemala, where I have lived for nearly 50 years, the guerrilla morphed into a network of NGOs. Judicial Watch has identified more than a dozen organizations that have received money from both USAID and George Soros’s Open Societies Foundations. The latter network claims to promote democracy while undermining liberty throughout the world, including in the United States.

Biden used U.S. money as a stick to bludgeon Guatemala’s president to extend a U.N.-created anti-impunity commission (CICIG) in 2015. The CICIG, not a U.N. organ, reported to nobody and had diplomatic immunity. The U.S. embassy used it as a battering ram to install guerrilla-successor allies in the country’s judiciary and Prosecutor General’s Office.

The socialist bloc in Guatemala is close to taking over the country as they have in Venezuela. The socialist candidate finished second in the last two presidential elections. Without the executive, the key to control of the country is the judiciary.

Guatemala’s Constitutional Court (CC), its last word on judicial matters, and the prosecutor’s office are anti-capitalist. They have illegally shut down businesses throughout the country. Consequent lack of opportunity has led to increased violence and fomented emigration.

The Pivotal Piece of the Puzzle

Guatemala is the key to illegal immigration to the United States. Its 595-mile, porous border with Mexico is open because the CC and corrupt prosecutors protect the guerrilla successors who dominate rural areas, especially at the border. If Guatemala were to properly apply its laws, it could significantly reduce the flows of migrants and narcotics to the United States. The Biden-Harris collectivist agenda will do the opposite.

The five-year term of the criminal magistrates Biden installed in the CC expired on April 13. Gonzalez and Secretary of State Antony Blinken have mounted a visible effort to appoint more collectivists to the CC. Last week, by meeting with criminal allies in Guatemala, they were busy undermining Guatemalans’ freedom from government abuse and control.

Five different institutions have appointments to the CC: the president, Congress, Supreme Court, Bar Association, and state university. Despite illegal U.S. intervention and coercion, all but the latter appointed jurists to whom the Biden regime objects. The new magistrates are not socialists. Three of them took their posts on April 14.

Harris called Guatemalan President Alejandro Giammattei on April 7. He told her the United States must work with the NT “to build walls of prosperity” via trade and law-enforcement cooperation—which will encourage would-be migrants to stay home. There are no reports Harris and Giammattei discussed U.S. meddling regarding the CC.

Guatemalans understand that another five years of CC criminal rulings and prosecutorial criminality could doom them to totalitarianism. Guatemalans support their institutions resisting Biden regime coercion, which will surely intensify now that socialists have lost control of the CC. Success of this resistance would give Guatemala a chance to grow and to reduce emigration.

If Guatemalans fail to resist Biden regime coercion, new immigrants will flood the United States, dooming Harris to failure as Biden’s point person here. She must hope the resistance succeeds and that she can somehow take credit for that.