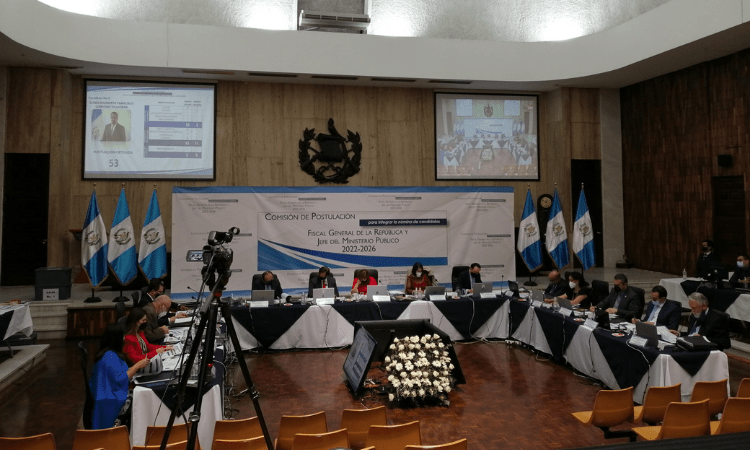 The DOS is openly trying to recover control of the Prosecutor General Office. (@guatevisible)

On April 6, US Representative Chris Smith (R-NJ) expressed his concern to Deputy Secretary of State Wendy Sherman about the State Department’s (DOS) Engel List sanctions against Guatemala’s Prosecutor General Consuelo Porras. DOS has been using these sanctions to pressure members of Guatemala’s nominating commission for prosecutor general to keep Porras from reappointment. Smith said US meddling in this is a violation of the Vienna Convention on Diplomatic Relations. I understand he and Representative Maria Elvira Salazar (R-FL) have just sent a letter to DOS regarding these concerns.

Smith’s bold statement, followed up with a letter, comes at a critical time. The nominating commission is scheduled on April 20 to finalize the list of six candidates. From the six, President Alejandro Giammattei will choose the next prosecutor general, who will take office on May 15. 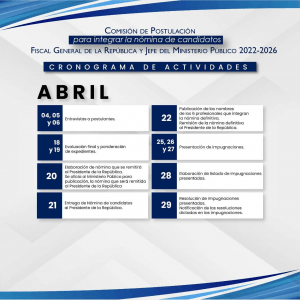 Using the Engel List to eliminate a candidate from consideration for prosecutor general is a criminal and unconstitutional act in Guatemala. Besides foreign laws having no validity there, all individuals enjoy the presumption of innocence, and no person’s right can be abridged without due process.

Despite such an elimination’s illegality, a number of commissioners—all prominent lawyers—voted to do it regardless. This indicates they must have been under significant pressure. DOS agents have threatened them with US visa revocations if they fail to do DOS’s bidding.

Assistant Secretary for Western Hemisphere Affairs Brian Nichols has stated that Engel List sanctions are a stigma its recipients “cannot then easily shake.” DOS abuses its authority by using these sanctions to make the nominating commissioners fear being stigmatized.

A DOS report to Congress says Engel List sanctions are based on “credible information or allegations … from media reporting and other sources.” This arbitrary standard flies in the face of Porras’s work as an effective partner to US law-enforcement agencies, recently praised by the Treasury Department.

A stated objective of the United States-Northern Triangle Enhanced Engagement Law that created the Engel list is “implementing transparent, merit-based selection processes for prosecutors and judges.” Besides violating the Vienna Convention on Diplomatic Relations, DOS intervention in the prosecutor-general selection violates congressional intent in the law.

DOS should provide Congress with a full account of the reasons for sanctioning Porras. Public DOS comments, press reports, and other sources indicate one reason was Porras’s firing of the former head of the Special Branch against Impunity, Juan Francisco Sandoval.

DOS had bestowed a newly created anti-corruption champion award on its agent Sandoval in February 2021. This was despite Guatemala’s state attorney having filed a criminal complaint against Sandoval. It was for the release he granted without authority to the infamous Odebrecht for Guatemala’s $384 million claim against the company. Sandoval had been accused of many crimes. A judge, for example, filed a criminal complaint that Sandoval had coerced witnesses to give false statements in a trial.

Smith commented that DOS had ignored Porras’s two offers through official channels to clarify her reasons for firing Sandoval. Smith asked Sherman to accept the offer and share the information with Congress. DOS silence raises questions regarding DOS efforts to prevent a second Porras term.

In a June 9, 2021, hearing on judicial independence in Central America, Smith mentioned the importance of judicial independence, respect for constitutionalism, fighting corruption, and promoting the rule of law in Guatemala. He said these issues have bipartisan support but that a problem occurs when fighting corruption “is distorted to fit an ideological agenda—when so-called anti-corruption campaigns are applied not in an even-handed manner, but rather as a partisan and ideological tool against one side to advance the interest of the other.”

Smith said “an honest examination of the record would reveal that it has come in part from the United States, including under two former ambassadors, Todd Robinson in particular, who have aligned themselves with left-wing political actors in the country and abroad.”

Many Democrats expect a tidal wave in congressional elections this year that will give Republicans control of Congress for the next two years. Biden’s radical, disastrous policies make this a near certainty. These are the same policies Biden tried to impose on Guatemala when he was Barack Obama’s point man on Central America. Guatemalans have rejected them and begun to recover their justice system from DOS control.

The DOS is openly trying to recover control of the Prosecutor General Office. Guatemala’s foreign minister has asked foreign embassies, including the US embassy, to “respect the laws and not interfere in internal affairs” regarding the selection process. The DOS runs this risk because failure would expose its past criminality. Smith and Salazar are among the first to have noticed this. More members of Congress will join as they learn of DOS perfidy.

Guatemalans should take heart that if they stand strong against DOS intimidation, they will soon have help. DOS today does not represent US principles. Instead of being in good standing with the current DOS, those commissioners who succumb to its intimidation could find themselves in the spotlight for their failure to adhere to Guatemala’s laws.