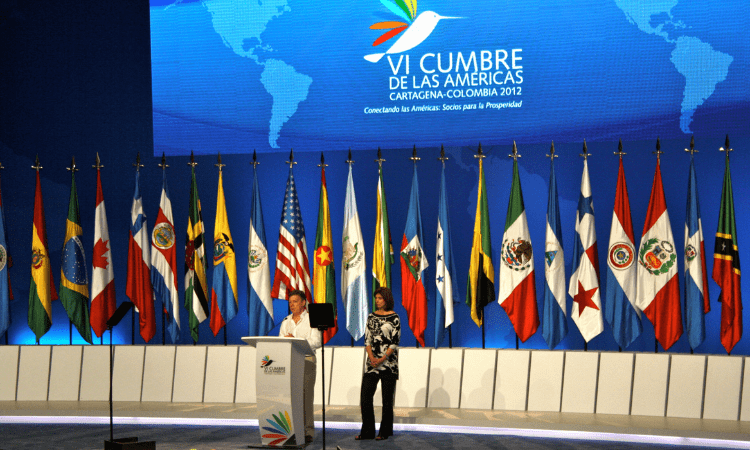 The summit will take place in Los Angeles, California, on June 6–10. (Flickr)

The United States has excluded anti-democratic Cuba, Nicaragua, and Venezuela from the 2022 Summit of the Americas. While US President Joe Biden aims to portray himself as a democracy advocate, the event exclusion rings hollow. His foreign policy is contradictory and detrimental to the United States, especially on account of concessions to Venezuelan and Cuban dictatorships.

The summit will take place in Los Angeles, California, on June 6–10—and its stated mission is the promotion of democracy. As the convenor, the Organization of American States also envisions addressing migration, corruption, and climate change.

The summit, however, lacks proper coordination and coherence. The US State Department (DOS) started sending invitations to heads of state on May 19. Two weeks before the summit’s opening, the guest list remains private and uncertain. US officials have reported that they might invite a Cuban representative as a spectator.

The softening of the US line towards Cuba is a response to pressure from caudillos such as Mexican President Andrés Manuel López Obrador (AMLO). Showing discontent regarding the exclusion of socialist regimes, AMLO and his allies are threatening nonparticipation.

During his tenure, Biden has been toing and froing with his stance toward anti-democratic regimes. Rather than a noble democratic act, excluding these countries from the summit appears to be a smokescreen to hide his mediocre foreign policy.

The Dictators with Friends

Despite evident violations of fundamental liberties, dictators from Cuba, Nicaragua, and Venezuela have effectively managed to gain support from alleged democracies in the region. These democratic countries are asking Biden to reverse his decision about the summit.

AMLO has been their most prominent supporter. After his official visit to Cuba—where he praised dictator Miguel Díaz-Canel by calling him “an extraordinary president”—AMLO made his threat to Biden.

Then other presidents of the region—Luis Arce from Bolivia and Xiomara Castro from Honduras—shared solidarity with the anti-democratic regimes by announcing they would not attend the summit. Caribbean Community (CARICOM) countries also threatened to support the boycott.

John Briceño, the prime minister of Belize that leads CARICOM, announced US officials were under diplomatic pressure to change their minds. CARICOM countries are waiting for the final word from the United States to make their decision.

Argentine and Chilean presidents, Alberto Fernández and Gabriel Boric, have also shown their discontent toward the decision, but they still intend to go. In contrast, Brazilian President Jair Bolsonaro rejected his attendance without further explanation.

Biden and Bolsonaro have had no contact since Biden took office. Bolsonaro, who believed the US presidential election was fraudulent, has said that Biden’s green policy has affected bilateral relations.

Guatemalan President Alejandro Giammattei has also announced he will not attend the summit after US officials condemned Consuelo Porras’s reappointment as prosecutor general. Porras has prosecuted Guatemalan justice officials that used to have the US embassy’s support.

Similar to Bolsonaro, Giammattei will not attend for a reason other than the exclusion of the three socialist regimes. He rejects constant DOS meddling in Guatemalan affairs.

The Chinese dictatorship, whose prominence is expanding in the region, has taken advantage of this conflict and backed its anti-democratic allies. Zhao Lijian, a foreign affairs minister spokesman, has contended that the Summit of the Americas cannot turn into a US summit. He also said the United States should cease treating the region as its backyard.

China’s presence in Latin America has soared in the last two decades. In Argentina, Peru, Chile, and Brazil, China is already beating the United States as their biggest commercial ally.

According to a study by the Atlantic Council, trade with China will account for around 15–24 percent of total commerce in Latin America by 2035. Chinese investment in infrastructure and strategic cooperation in the region is also growing exponentially.

The countries that support Cuban, Nicaraguan, and Venezuelan dictatorships are more committed to continuing a socialist political agenda than promoting democracy in the region. Meanwhile, the United States appears incapable or unwilling to reverse this trend.

Disputes within US Politics

On the one hand, US Republican Senators Rick Scott and Marco Rubio, together with four congressional representatives, sent Biden a letter asking him to hold tight on his decision to exclude dictators from the summit. They argued that inviting them would legitimize their criminal regimes.

They asked Biden to invite Juan Guaidó as Venezuela’s legitimate, US-recognized president. In the letter, the legislators also requested political support for the bipartisan Bolivar Law that would ban federal agencies from negotiating with Maduro’s criminal regime.

On the other hand, US Democrat Congressmen Raúl Grijalva and Jesús García exhorted Biden to lift economic sanctions imposed on Venezuela by the Trump administration. They also asked him to continue “the constructive commitment and diplomacy with the Venezuelan government,” referring to the meeting US officials held with Maduro in March.

Democrat Senator Bob Menéndez, however, has contradicted his party peers. Menéndez has opposed alleviating sanctions with Cuba and Venezuela. “The Biden administration must avoid lifting any additional sanctions until Maduro makes serious concessions in the negotiations,” Meléndez said.

The Summit of Discord

However, Biden’s constant stumbles have hindered his legitimacy and image as a democracy advocate. The Biden administration has continued to make wrong moves. Amid the summit lead-up controversy, US officials have no better plan than to partially alleviate sanctions on Cuba and Venezuela.

Cubans would no longer need to stick to the $1,000 quarterly limit for remittances. Although this seems like a positive measure for Cuban families, the devil is in the details.

According to a Havana Consulting Group study, the largest beneficiary would be the Cuban dictatorship. Research reveals that the government confiscates around 75 percent of every remittance dollar on the island.

In the case of Venezuela, Biden has proved willing to give breathing space to the dictatorship in exchange for oil. The sanction alleviation would allow Chevron to negotiate its license with state-owned oil company PDVSA to operate in Venezuela, but it would not allow Chevron to export oil yet.

What is the point of ostracizing the three dictatorships while throwing them lifesavers?

Biden has put himself between a rock and a hard place. If he impedes Cuba, Nicaragua, and Venezuela from attending the summit, other countries will not go. If he reverses the decision and invites them, he will lose his authority as a democracy advocate.

The United States is risking much more than an international embarrassment. Its role as a predominant actor in the hemisphere is at play. US influence is decreasing in the region, while Chinese, Russian, and Iranian influence is gaining ground.

In his presidential campaign in 1992, Bill Clinton used the phrase: “It is the economy, stupid.” Updating it for Biden, he would say: It is politics, stupid.