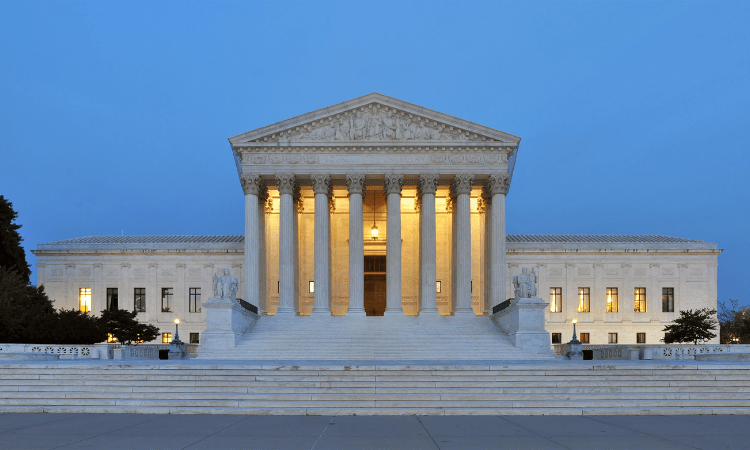 Congressional Democrats also made clear their desire to pack the Supreme Court with more justices. (Wikimedia)

The Michael Sussmann acquittal is a foretaste of what our judiciary will look like if the Marxists who run the Democratic Party achieve their goal of centralized, arbitrary, one-party control.

With their new congressional majority last year, Democrats immediately moved to create a voting law that would have federalized voting, eliminated voter ID, and registered large numbers of ineligible voters. Congressional Democrats also made clear their desire to pack the Supreme Court with more justices.

The voting law would have facilitated widespread fraud and let the ruling party retain power even if the people voted to remove them. Federalizing presidential elections is unconstitutional. An expanded Supreme Court would have ignored the Constitution and upheld the voting law.

Two senators—Joe Machin (D-WV) and Kyrsten Sinema (D-AZ)—kept the Senate from passing both measures and saved our democratic republic from becoming a dictatorship.

Washington, DC, is more than 90 percent Democrat. The Sussmann judge, an Obama appointee, issued pretrial rulings favoring the defense and accepted overtly biased Democrats for the jury. The judge also had his own conflicts of interest. These factors caused most legal observers to predict the defendant would not be convicted.

On the other hand, noted legal scholar Jonathan Turley said the evidence against Sussmann was “remarkably strong.” The evidence was simple. Sussmann falsely claimed he was providing information to the FBI as a concerned citizen, not in representation of a client. The prosecution provided Sussmann’s billing record to the Hillary Clinton campaign.

Sussmann is now gloating about beating the “false” accusation. His Democrat colleagues and supporters seem unconcerned about the predetermined verdict. They fail to understand that a politicized justice system leads to dictatorship—or maybe they prefer that outcome.

A look at a system politized by Joe Biden when he was Barack Obama’s point man in Central America reveals alarming results of unchecked judicial power. Biden pressured Guatemala’s president in 2015 to extend the mandate of a criminal UN commission (CICIG). Former US Ambassador Todd Robinson then used the CICIG to depose the president and co-opt Guatemala’s criminal-justice system.

Robinson gave Guatemala’s prosecutor general two choices: be destroyed by him and the CICIG or do his bidding. In 2016, Robinson summoned Guatemala’s congressional leaders to his residence. Taking them into the garden, he threatened them with investigations and US visa revocations if they failed to vote for his candidate for Guatemala’s court of last resort, the Constitutional Court (CC). Gloria Porras won by 145-6 in a multicandidate field.

Guatemalan Congressman Fernando Linares was one of the six who voted against Porras and in 2017 had his US visa canceled. He shared: “[CC] magistrates have told me [Porras] told them ‘what I want you to vote for has the backing of the US ambassador.’” The court illegally closed businesses, harming the economy and surrounding communities. It jailed political opponents without evidence, violating their constitutional rights, and protected allies regardless of the crimes they committed.

Some accused persons spent more than six years in preventive detention without evidence presented against them and without trial. Some died in illegal preventive detention. Guatemala’s Office for Prevention of Torture condemned such treatment several times. Military veterans were routinely convicted in show trials with blatant violations of due process and their constitutional rights. Robinson and his successor attended two trials and praised them.

The US State Department ran this travesty of justice. Several Republican members of Congress denounced this behavior. Democrats praised the CICIG and the CC. Corrupt State Department actors remain above the law.

Sussmann’s false information about a connection between candidate Donald Trump and a Russian bank and the false Steele Dossier led to Robert Mueller’s investigation of Trump-Russia collusion. Mueller’s team used CICIG tactics to coerce people to falsely testify. They arrested targets with great fanfare to convict them before trial and intimidate other targets. Democrats, their supporters, and their oligarch, media, and bureaucrat partners think nothing about using these totalitarian tactics against political opponents. They consider their enemies beneath contempt and deserving of such treatment.

Chief Justice John Roberts said “We do not have Obama judges or Trump judges … we have … judges doing their level best to do equal right to those appearing before them.” Roberts lives in the past. This is the way it should be, not the way it is under the Marxist manipulators and their Democrat followers.

Last year, Kamala Harris hosted Gloria Porras at the White House and praised her as a “fighter for justice.” Judge Emmet Sullivan violated Supreme Court precedent to continue the Michael Flynn case after the Justice Department withdrew the charges; it had found previously suppressed exculpatory evidence. These are the kind of political judges Democrats would pack the court with.

The evidence revealed during the Sussmann trial remains relevant. We must all recognize the Marxist assault that has politicized justice. If we do not return to accepting the rules and applying them equally, we will lose our liberty.