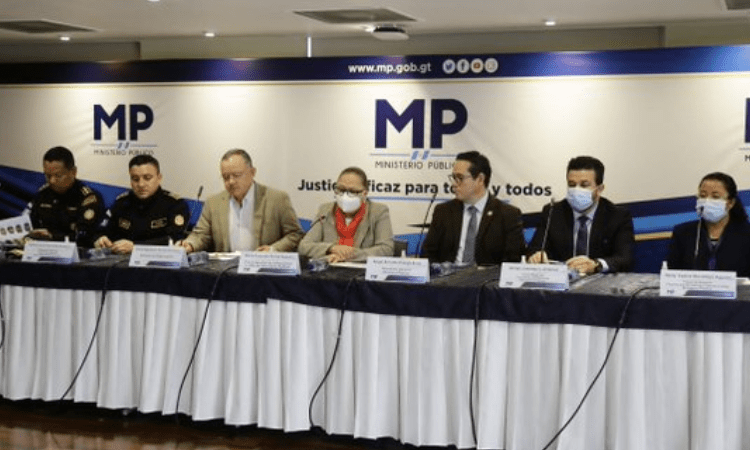 The Biden regime is desperate to highlight any hint of success against illegal immigration. Meanwhile, the regime is keeping the floodgates open and fomenting disorder abroad.

Homeland Security (DHS) Secretary Alejando Mayorkas has bragged about his actions “against vicious smuggling operations … with our foreign partners.” The actions occurred in Guatemala, but you would not know it by listening to Mayorkas.

Law Enforcement DOS Could Do Without

DOS opposes Porras because she properly applies the law, including to DOS-favored prosecutors and judges who violate it. These violators have bank accounts swollen beyond the reach of a civil-servant salary, as documented by Primer Informe. A recent high-court ruling has reversed illegal actions by former prosecutor Juan Francisco Sandoval and judge Erika Aifán, but both have received DOS awards and are fugitives in the United States.

Mum’s the Word on Why

Since Porras’s reappointment in May, DOS has mostly refrained from commenting on events that would normally provoke DOS condemnation. Likely to avoid congressional attention, DOS farmed out its attacks to its media, NGO, and congressional partners.

The Associated Press commented about the closure of the newspaper ElPeriódico’s print edition after the arrest of its president, José Rubén Zamora. It quoted Zamora from prison touting “transparency” and that the case against him “is a set-up effectively designed and mounted by the president, prosecutor general, and other people.” The AP, earning its fake-news credentials, repeated DOS propaganda about Porras’s supposed persecution and corruption.

While mentioning the charges against Zamora—money laundering and extortion—the AP omits the public details of the cases. Guatemalan authorities caught Zamora’s employees delivering $39,000 in cash in exchange for a check from someone Zamora had recruited to disguise the source.

A former congressman filed charges against Zamora and DOS agent Sandoval, accusing them of extortion. He accused Sandoval of passing confidential information to Zamora, who offered not to publish it in the gossip section of ElPeriódico if the congressman paid $26,000. Zamora has admitted in court there are more than 100 defamation lawsuits against him.

US Congress in the Fray

Representative Norma Torres (D-CA), born in Guatemala, recently introduced a resolution praised by 14 radical US NGOs and echoing DOS propaganda about Guatemala. It cites DOS’s arbitrary sanctions against Porras. Torres calls for aggressive, illegal intervention against Guatemala, apparently to save her comrades from responsibility for their crimes and to continue the agenda of imposing criminal totalitarians.

Torres does not mention that the Porras sanctions stem from her having fired Sandoval, whom Secretary of State Antony Blinken gushed over in a personal letter. DOS ignored two formal offers from Porras to clarify her reasons for firing Sandoval. Representative Chris Smith (R-NJ) urged Deputy Secretary of State Wendy Sherman in an April 6 hearing to accept Porras’s offer and share the information with Congress. DOS’s silence is deafening.

One reason Porras stated publicly for firing Sandoval was he had illegally hidden information from her. DHS had sent a referral to the Justice Ministry about an NGO laundering USAID money, but Sandoval buried it for two years. Torres has ignored the public record and exposed herself as a DOS agent promoting criminality in Guatemala.

In her resolution, Torres states six journalists fled out of fear for their lives after receiving death threats. She apparently blames the government but provides no details. Torres follows this by referring to Zamora’s arrest—implying without stating that Zamora is a victim of government press persecution.

The Guatemalan nonprofit association Liga Pro-Patria has promoted the rule of law in Guatemala for 25 years. It states: “Public evidence against Zamora indicates he has committed serious crimes unrelated to journalism.”

House Foreign Affairs Committee Democrats scheduled Torres’s resolution for discussion on December 6 but reportedly canceled it when Republicans showed opposition. There was no basis for the resolution condemning Guatemala, especially after DOS has ignored multiple congressional inquiries about its actions there.

Porras’s active cooperation in DHS’s Hacienda Rio operation—despite DOS defaming and persecuting her—shows her commitment to the law and her duty. The Biden regime could mitigate illegal migration by working with Porras and the Guatemalan government instead of against them.

That is not about to happen, though, going by the Biden regime’s consistent actions. To compound the problem, recent elections suggest few Americans have recognized the regime’s totalitarian disposition.

US hopes rest on the new Republican-majority House exposing Biden regime corruption and totalitarianism. The House must push back and get straight to work with investigations and hearings.