One Man Rules Guatemala, and He Isn't Jimmy Morales
Skip to content 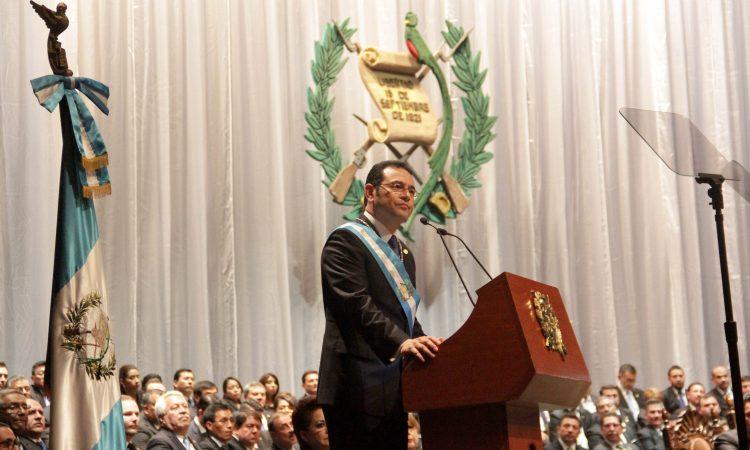 Guatemalan President Jimmy Morales came into office as an outsider and a rejection of the established political class, only to be intimidated into submission by the United States. (Salvadoran Presidency)

In case you didn’t know, Guatemala went through a wrenching year in 2015. Its leaders were deposed and imprisoned on corruption charges. As the Organization of American States and others clearly saw, the literal decapitation of society was part of an attempt to cancel the country’s elections.

In spite of it, Guatemala’s populace flooded to the polls and gave the boot to the establishment by choosing a president who had never held public office. Now that the new government is in power, its outlines are in clear view, and it’s time to congratulate the top man.

Hail to the chief! The new leader of Guatemala is President Barack Obama.

We know it sounds strange — and we have to admit that the top guy claims this isn’t his style. Here is what Obama told the world in his recent, valedictory State of the Union address:

“In today’s world, we’re threatened less by evil empires and more by failing states. It’s up to us, the United States of America, to help remake that system.”

In one respect, Obama’s statement happens to coincide with the truth. The United States under Obama is not threatened by evil empires, because it is itself the evil empire.

In his dealings with Cuba, Obama wants to supplant Venezuela as the regional power. That’s easy compared to his program for Central America, where he is trying to realize what even Castro and the Soviets never accomplished. He is building a Marxist power-base for the entire region.

The evidence for Obama’s policy is so well established that it can be ignored only by those who are genuinely ignorant of it, or by those who want to conceal it. The international faction of guerrilla sympathizers — beginning with Obama and his ambassador to Guatemala, Todd Robinson — are in the latter category, while many conservatives are in the former.

The guerrilla sympathizers, who are presently winning this one, have no reason to explain themselves. It’s the conservatives, in the United States and Guatemala, who are not doing their job.

For the benefit of honest conservatives, wherever they might be, here is a brief account of how Obama has become the acting president of Guatemala.

Ever since coming to power, Obama — with Hillary Clinton as an accomplice — has been helping the Marxists build a power-base inside Guatemala’s government. For close to four years, Attorney General Claudia Paz y Paz, a lifelong guerrilla sympathizer, undermined the country’s legal structure while covering for the armed guerrilla militias — designated by the United Nations as “human-rights groups” — that now control much of Guatemala’s countryside.

Paz y Paz enjoyed the blanket protection of the United States. The cornerstone of her activity, the genocide prosecution of General Efraín Ríos Montt, was lustily supported by the United States; First Lady Michelle Obama presented a State Department award to the presiding judge, despite the fact that her verdict had been set aside by Guatemala’s highest court for having violated the defendant’s constitutional rights.

Paz y Paz was roundly disliked in her own country and failed to win reappointment. Her dismissal angered US officials, who eventually countered by supporting the incrimination of the president and vice president on corruption charges that under due process would likely be unprovable. The agent in that prosecution was the alleged anti-corruption commission or CICIG, appointed by the United Nations and insistently backed by the United States.

The coup that the United States and the United Nations tried to achieve — “postponing” elections in favor of a reform convention to be run by the country’s political elders, or veteran Marxists — was frustrated by the huge voter turnout. Jimmy Morales, a former TV comedian, vanquished a field of established figures including former first lady and guerrilla sympathizer Sandra Torres.

From the instant of Morales’s victory, US policy has had a single-minded mission: make it impossible for Morales to govern effectively.

Given Morales’s inexperience, and the guile of his opponents — with the crushing weight of US power, which now, for the first time, is serving a Marxist agenda — the outcome was foreordained. Within a week of taking office on January 14, Morales was a paper tiger, face to face with the real thing.

In its 2015 year-end foreign aid package, the United States had laid down a dozen conditions for Guatemala. Four of these are especially revealing.

Condition 5 is that special emphasis must be given to prosecutions of former military and police officials who are “credibly accused” of human-rights violations. That condition, illegal in several respects, creates an obvious incentive that the government has lost no time in following.

Condition 7, to cooperate with “anti-impunity commissions” and “human-rights groups,” is a direct endorsement of the CICIG and the guerrilla militias. Condition 9, to limit the army’s role in domestic peacekeeping, is a further support for the militias, which can usually overwhelm the police.

Most revealing of all is Condition 8, which mandates reform in favor of economic “equality” rather than economic freedom. This condition is straight out of Obama’s playbook. It supports the militias, which crush economic freedom in the name of equality.

Commenting on his country’s position, US Ambassador Robinson told a Guatemalan newspaper: “I don’t see meddling by the US government.”

In that comment, the ambassador is like the Cuban political prisoner whom fellow inmates, behind his back, used to call “silly fatty.” The man pretended to be like other prisoners; but the others were spectral, while “silly fatty” was absurdly well-fed. He could only be a stool pigeon, and no one could say it to his face.

The simple fact is that Morales’s presidency, only days old, has unfolded precisely in line with the US conditions. An early appointment to the key Interior Ministry was vetoed by the outgoing president on grounds that the appointee — Oscar Platero, a retired army captain — did not have good working relations with the CICIG.

In every respect, Platero was the right man for the job. His firing showed that the United States has veto power over all official appointments — ironic, considering its claims of fighting corruption and impunity.

Morales has simply given up the ghost in terms of choosing his own officials. The new interior minister is a Paz y Paz mini-me from the Justice Ministry who addresses people as “comrade.” Pro-guerrilla media are crowing over this situation — and identifying the US embassy as one of its authors.

A guerrilla militia, the Committee of United Campesinos or CUC, is now serving as a mediator in property disputes. Since the CUC is also a perpetrator of land seizures, it means the fox is running the chicken coop.

Finally, mass arrests of former military officials have begun; the officers, against the law, are being charged with crimes they allegedly committed 30 or 40 years ago. Again, this conforms exactly with the US aid guidelines, which are now instituting chaos and social breakdown.

Guerrilla sympathizers in Guatemala and outside are reveling in this situation. It’s time for conservatives — by which we mean supporters of free markets and the rule of law — to step up. Rome is burning. If you think the US election is more important, then get straight about Rome and take it into the election with you. It’s a terrific issue. And many will be helped by what you do.