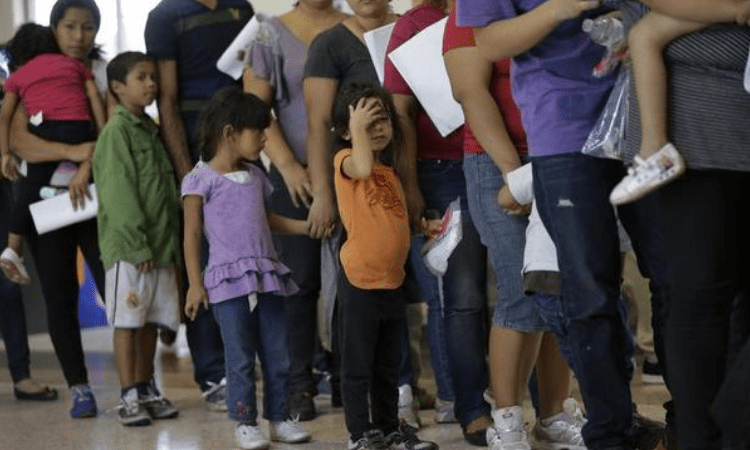 According to DHS, children crossing the borders are “at great risk for multiple medical problems.” (Pride Immigration)

President Donald Trump has engaged in a concerted effort to end Democrat abuse of asylum as an open door to the United States. He has promoted new rules and negotiated with regional partners to confront illegal immigration.

Democrats, driven by politics, are doing everything in their power to facilitate illegal immigration. They harm the source countries and simultaneously pull and push the children they claim to care about right into the arms of Mexican cartels.

Trump’s implementation “callously puts at risk the safety and well-being of children,” according to Bacerra. Speaker of the House Nancy Pelosi added, “Democrats continue to call on this administration to end its assault on families and children, and to join us to protect families.”

These Orwellian statements show Democrats hate Trump and do not care about children.

In 2015, an Obama-appointed federal judge extended the FSA to cover accompanied minors and limit detention to 20 days. Illegal immigrants with minors who claim fear of returning to their countries of origin are released pending a hearing. They can remain legally in the country for as much as 4–5 years. Then 85 percent do not qualify for asylum and remain illegally in the country after failing to appear for their hearing. Even then, few are deported.

According to a Homeland Security Advisory Council report, the influx of families increased by 600 percent in the last year. The bipartisan group of professionals estimated family interceptions will exceed 500,000 this year.

The current open-door system is a strong pull factor, encouraging economic migrants to falsely claim persecution as a way into the country. The indispensable element is to enter with minors.

According to DHS, children crossing the borders are “at great risk for multiple medical problems,” including “dehydration, malnutrition, infections, psychological trauma, physical injuries, and all aspects of child maltreatment … Some children are being recycled by criminal smuggling organizations.”

Many families enter illegally through remote areas with dangerous conditions. Congress could change the law so no alien could request asylum unless they enter the country at an official point of entry. Such is their hatred for Trump, Democrats refuse to do this and to pass other reforms to protect the children as well as the United States.

Trump has gotten Mexico to deploy its army on its northern and southern borders. He has also signed an agreement in principle with Guatemala to reduce asylum claims from El Salvador and Honduras, two major sources of economic migrants. Trump is in talks with Panama for a similar arrangement to reduce the flow from other continents.

Besides pull factors, Democrats, with their media and permanent State Department bureaucrat comrades, also promote push factors. Part of the asylum agreement with Guatemala is a significant increase in H-2A temporary worker visas for Guatemalans.

These visas would help alleviate poverty and exposure to violence. Democrats oppose this.

Magistrates of Guatemala’s highest court tried unsuccessfully to kill the asylum agreement with Trump. Illegal Obama intervention placed the magistrates on that court. During an August 8 visit to Guatemala, facilitated by US Ambassador Luis Arreaga, Pelosi met exclusively with socialist opponents of the agreement, including judges.

With support from judicial officials and prosecutors protected by the US embassy, violent socialist gangs descended from the Fidel Castro-supported guerrillas dominate Guatemala’s rural areas, especially its borders. The groups force inhabitants to destroy businesses and invade private property. The lawlessness keeps open the flow of illegal migrants and drugs to the United States.

Closing the asylum loopholes will reduce the pull factors, but the push factors will remain. Acting DHS Secretary Kevin McAleenan says Guatemala is the choke point for the illegal flows—the only land route from South and Central America to Mexico and the United States.

Now that Trump is working on the details of the asylum agreement with Guatemala’s outgoing president and its president elect, who takes office in January, Trump has a chance to correct the Democrat-supported push factors.

Trump can reverse the Obama policy by appointing a new ambassador and assistant secretary of state for Western Hemisphere affairs. New people alone will not suffice. The new appointees must execute his policy.

Trump should also support the current and new Guatemalan governments in applying the law to the judiciary, justice ministry, and rural areas. Grateful inhabitants will then help authorities reduce the illegal flows.

Democrats and their media and bureaucrat allies are doing everything possible to keep the flow of illegal immigrants coming. It is essential to their agenda to portray Trump as an anti-immigrant racist. It also means demonizing US officials tasked with protecting the children and the rule of law in the United States.

Mitigating the pull and push factors of migration are essential to national security and American values. Trump is effectively working for this, and his success in this endeavor will help him in the 2020 election.