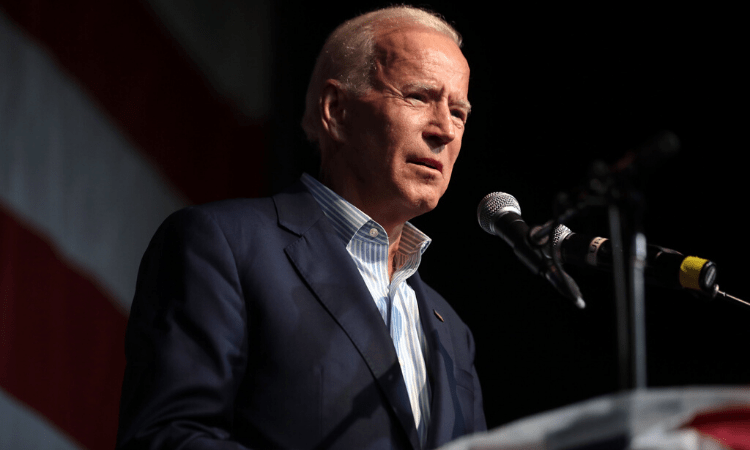 Even after Biden left office, the US embassies in both countries continued Biden’s corruption. (Gage Skidmore)

Former Vice President Joe Biden’s skeletons came out of the closet in the Senate impeachment trial. The video of him bragging about meddling as the Ukraine point man returned to haunt him.

Biden leveraged US aid to get a prosecutor fired, the one investigating a company owner whose board of directors included Hunter Biden. The elder Biden likewise bragged about his point-man status in Guatemala, where he also leveraged US aid.

Even after Biden left office, the US embassies in both countries continued Biden’s corruption.

After President Donald Trump removed holdover Ambassador Marie Yovanovitch from Kiev, he countered rising criticism: “I have the right to hire and fire ambassadors … I want ambassadors chosen by me.” He is constitutionally correct.

As noted by Trump’s personal lawyer, Rudy Giuliani, Yovanovitch was supporting Hillary Clinton in the 2016 election. The Ukraine prosecutor general alleges Yovanovitch continued Biden’s tactic and gave the prosecutor a list of individuals not to prosecute. She denies this, but journalist John Solomon reports a State Department official has confirmed there was a list.

Deputy Assistant Secretary of State George Kent, the embassy’s chargé d’affaires in 2016, has testified to embassy pressure on Ukrainian prosecutors to protect three people. Two “were criticized by a Ukrainian court for improperly interfering in the 2016 US election.” The other helped the Anti-Corruption Action Center, funded by a George Soros charity and the State Department.

Events regarding the UN International Commission Against Impunity in Guatemala (CICIG)—which could thank Biden for its continued existence—parallel Ukraine events regarding the Anti-Corruption Action Center. Mounting evidence supports Trump’s request for an investigation of corruption in Ukraine, including corruption from the US embassy.

A Wall Street Journal column stated the CICIG “had undermined the rule of law and paralyzed (Guatemala’s) economy.” Guatemala’s former president told the United Nations in 2018 of CICIG witness tampering, illegal negotiations with convicted criminals, use of false witnesses, and illegal wiretaps and imprisonment.

As vice president, Biden traveled to Guatemala three times in 2014–2015 to insist on CICIG continuation. Leveraging Alliance for Prosperity money, Biden made clear in public and private to Guatemala’s president “there was only one road for Guatemala … for the CICIG to stay.”

The Soros-supported CICIG became a tool of then US Ambassador Todd Robinson to impose socialism on Guatemala. He used the threat of investigations to force a socialist ally onto Guatemala’s highest court. With control of the judiciary, the embassy jailed political opponents without evidence and in violation of law.

Unlike Ukraine, so far there is no evidence of a Biden financial interest in Guatemala. Rather, his interest was ideological, and more destructive. Biden’s intervention decreased economic opportunity and increased violence and the flow of migrants and narcotics from and through Guatemala—the only land route from Central and South America to the United States.

Contrary to the moderate image Biden and his supporters promote, his actions in Guatemala show he enthusiastically executes his party’s socialist agenda.

Biden continued to support the CICIG after he left office, including backing the former attorney general in the 2019 presidential election. She did the CICIG’s and embassy’s criminal bidding. Now on the run outside Guatemala, she has an arrest warrant against her for embezzlement. Many Democrats, including Representatives Norma Torres and James McGovern and Senators Patrick Leahy and Ben Cardin, continue to support the CICIG and Guatemala’s corrupt high court.

Yovanovitch stayed two years into Trump’s presidency. Robinson continued the Biden policy until he left Guatemala in late 2017. State Department comrades managed to replace him with Luis Arreaga, who picked up where his predecessor left off.

Arreaga, who has aligned himself with Democrats, unsuccessfully attempted to derail Trump’s 2019 asylum agreement with Guatemala. For House Speaker Nancy Pelosi’s August 2019 visit to Guatemala with a congressional Democrat delegation, Arreaga arranged for Pelosi to be photographed between two socialist judges. This sent a message of support to corrupt authorities working with Arreaga for socialism.

Although named during Trump’s tenure, Arreaga has betrayed him as ambassador. As Trump did with Yovanovitch, he should immediately remove Arreaga. This would help the United States and Guatemala unravel the socialist cabal.

State Department permanent bureaucrats work with Democrats and corrupt media to promote their agenda and undermine Trump. Trump appointees who cross this cabal find themselves subject to false media reports followed by congressional action by Democrats. The deep state is real and powerful; it protects and perpetuates itself and works for globalism and socialism.

Since the Senate decided not to call witnesses regarding Ukraine, which would have drawn back the curtain on the deep state, Senate committees should investigate Biden and 2016 election meddling. Democrats and their media would scream, lie, and accuse to hide the truth, but that would create more awareness and contribute to the end of their corrupt schemes.