US Ambassador Imposing Socialism on Trump’s Watch
Skip to content 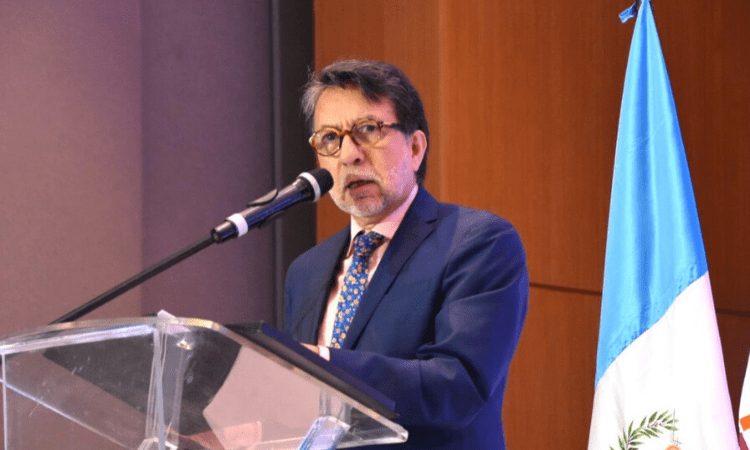 US ambassador Luis Arreaga (left) is busy placing his socialist allies in the Guatemalan government. (US Embassy Guatemala)

US Ambassador Luis Arreaga has given marching orders to Guatemala, as reported in the January 30 Prensa Libre.

He said President Alejandro Giammattei, inaugurated on January 14, “wants to be the United States’ best ally.” However, there was little doubt to which United States Arreaga was referring—that of his deep state comrades and not of his elected boss, President Donald Trump.

Arreaga specifically addressed the Guatemalan Congress. He said the United States is ready to support laws that promote economic development, and for “Those who don’t want to cooperate … We will know who you are.”

Arreaga and his defenders could pass this off as a stance against corruption. However, anyone familiar with US policy in Guatemala since 2010, including what Arreaga has done in the last two years, knows this is imperialism.

The ambassador and his predecessor, Todd Robinson, have tried to force socialist legislation and constitutional changes on Guatemala. They have blamed the private sector and Congress for delays to this plan. As a remedy, Robinson and Arreaga worked for four years to rig the 2019 election for their socialist allies. They mostly succeeded.

Attorney and political activist Giovanni Fratti told the Impunity Observer, “at least 22 of the 160 seats in Congress were fraudulently awarded to socialists, involving 600,000–1 million votes out of the 7 million cast.” The outcome vastly surpasses the far left’s tally in prior elections.

Robinson and Arreaga used the UNE party, which unanimously supported Venezuela’s Nicolás Maduro, as their vehicle to take over Guatemala. As the principal beneficiary of the ambassadors’ massive electoral fraud, the UNE controls 54 congressional seats. However, Arreaga still needs more support to impose his agenda, hence the threats.

Former Vice President Joe Biden leveraged US aid to obtain an extension of the UN International Commission Against Impunity in Guatemala (CICIG) in 2015. The CICIG, supposedly an advisor to the prosecutor general, took over criminal prosecution and became a corrupt battering ram of the US embassy.

With threats of visa revocations and criminal action against deputies, Robinson abused his power in 2016 to force his socialist allies onto Guatemala’s Constitutional Court (CC), its last word on judicial matters. With control of the judiciary and criminal prosecution, the ambassador persecuted political opponents without evidence and in violation of law.

Since his arrival in 2017, Arreaga has picked up where Robinson left off. He uses criminal prosecution and the judiciary against political opponents. In this context, Arreaga’s warnings to members of Congress are significant threats to them and any others who might resist him.

Arreaga also said, “There are representatives of the three branches of government and the private sector who clearly have participated in corruption  … We will not tolerate corruption, narcotrafficking, and human-rights abuses.”

Arreaga stated investors want clear rules and judicial certainty, which will in turn generate benefits for Guatemalans. He added the election of magistrates is very important for this, without mentioning that his CC comrades illegally prevented that from happening in October as the Constitution mandated. Arreaga waited for the fruit of his electoral fraud to take office.

Large donors refrained from supporting parties and candidates in the 2019 election due to Arreaga’s intimidation. He privately made clear they would be prosecuted and their assets confiscated if they defied him. That shadow persists regarding Arreaga’s desired legislation.

Arreaga rules Guatemala—against Trump’s stated policy—no matter how reasonable his words may appear to the unknowing. Arreaga is the leader of corruption and human-rights abuses in Guatemala, and his actions have facilitated narcotrafficking.

The CC has issued many illegal rulings in all fields since 2016. Its magistrates have ordered authorities not to process legal actions against themselves. They have interfered in executive and legislative branch responsibilities. The CC has illegally shut down private businesses and increased unemployment, violence, and migration.

Even more reprehensible is the harm to the poorest and most defenseless Guatemalans by Arreaga’s judiciary and Prosecutor General’s Office. They protect violent gangs descended from the Fidel Castro-supported guerrilla from Guatemala’s internal armed conflict (1960–1996). These gangs force inhabitants to destroy businesses, invade private property, and deny authorities access to their areas. The resulting lack of state presence, especially along the borders, facilitates the flow of illegal migrants and narcotics.

La Hora newspaper has reported authorities intercept less than 1 percent of narcotics passing through Guatemala. The rest continues to the United States.

Trump threatened tariffs, visa restrictions, and fees on the annual $9 billion remittances to Guatemala after Arreaga and CC comrades tried to derail the 2019 asylum agreement. In an unusual public statement, CC magistrates said they hadn’t impeded the agreement. Arreaga now praises it to keep Trump from paying attention to him and his CC comrades.

Arreaga is busy placing his socialist allies in Giammattei’s administration. Deep-state efforts to impose socialism on Guatemala also harm US interests, and the efforts will continue until Trump stops them.

Naming a political appointee with a direct line to Secretary of State Mike Pompeo and Trump to immediately replace Arreaga would shake the socialist infrastructure in Guatemala that Arreaga leads. It would enable effective US-Guatemala cooperation that would benefit both countries.