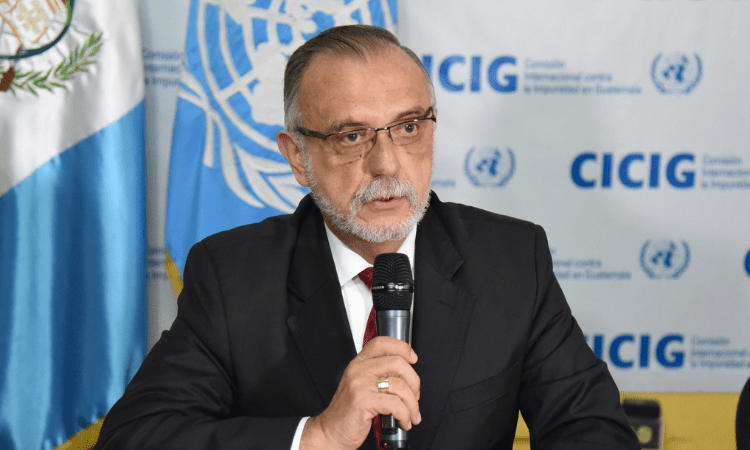 None of the three key speakers at the forum can enter Guatemala without risking arrest. (Flickr)

The Biden regime has sneakily convened a forum in Washington, DC, on October 27–28. Its real purpose—contrary to the stated purpose of fighting corruption—is to assure Guatemala’s border with Mexico remains open. Illegal immigrants can continue to flood our country and become Democrat voters. The surrogate host is the Honduran NGO National Anticorruption Council (CNA).

US authorities have detained more than 1.7 million migrants on the southern border during fiscal year 2021, with a spike after Joe Biden took office. This does not include the unknowable number of immigrants who escaped detection. This is purposeful and illegal. Biden violates immigration and any other laws he is obligated to faithfully execute that conflict with his agenda.

Guatemala—the key to illegal immigration with its 595-mile border with Mexico—is the only land route from South and Central America to the United States. Migrants from all over the world now pass through Guatemala’s borders. They are open thanks to Biden.

Under Obama, Biden abused power to place criminal allies in charge of Guatemala’s judiciary and Prosecutor General Office. State Department bureaucrats betrayed their oath and continued the policy under Trump. In control of these state bodies, Biden’s allies could jail any political opponent without evidence and in violation of law, which they did often.

Guatemalans were understandably intimidated by US power executed through local allies. Able to see a dark future, Guatemalans this year resisted Biden pressure and appointed independent magistrates to their court of last resort. Without control of the judiciary and later criminal prosecution, the Biden regime had to take the lead openly to re-impose its allies.

Having failed, they are gathering their forces and strategizing at the October 27–28 forum. While the Biden regime has interests in Honduras and El Salvador, its prime target is Guatemala because of its geostrategic location.

The forum invitation features USAID as one of its donors. A USAID advisor to the Biden administration is also a scheduled speaker, along with Representative Norma Torres (D-CA), a flagrant supporter of criminality. All this and holding the event in Washington, DC, indicate the CNA only fronts for the Biden agenda of restoring its criminal allies to power in Guatemala. The forum is to intimidate Guatemalans into acquiescence.

Americans can learn from this what is coming if we fail to awaken and resist.

Three key speakers at the forum are former Commissioner of the International Commission against Impunity in Guatemala (CICIG) Iván Velásquez, former Guatemala Prosecutor General Thelma Aldana, and Sandoval, the former head of Guatemala’s special branch against impunity (fired in July). None of the three can enter Guatemala without risking arrest. Their most notorious scandal related to the infamous Odebrecht, which included the United States and 10 Latin American countries. Odebrecht pleaded guilty in US federal court to bribery and paid a $2.6 billion fine.

Guatemala is the only country not compensated by Odebrecht. Sandoval traveled to Brazil as a tourist and gave Odebrecht a release for Guatemala’s $384 million claim against it in exchange for a still unpaid $18 million. Guatemala’s state attorney filed a criminal complaint against Sandoval for usurpation of functions. He had no authority to grant a release.

Aldana and Velásquez are responsible. The former because, as the boss, she authorized the trip, and the latter because CICIG was a co-plaintiff.

Sandoval has an arrest warrant pending against him. The charges are not public since the indictment is still sealed. However, CNN’s sources say the accusations are for “breach of duties and obstruction of criminal action.” Aldana’s arrest warrant is for embezzlement. While in office she bought a building not meeting government requirements for twice its value according to the Ministry of Finance.

Velásquez was the worst of the three because he enjoyed diplomatic immunity. A report by four civic groups detailed CICIG criminality. The US Helsinki Commission exposed CICIG collusion with Russia against a Russian family who had fled Vladimir Putin’s persecution. Former President Jimmy Morales denounced CICIG criminality at the United Nations and later expelled the CICIG from the country.

These are the people the Biden regime uses our tax dollars to return to power. Their crimes are in the public record. Biden’s media partners will not report official lawlessness abroad or at home. Democrats in Congress will not act, making them accomplices.

The Biden regime also weaponizes justice against its opponents at home while giving a pass to its allies, such as Black Lives Matter and Antifa. If this continues, we will become like Guatemala was when Biden’s allies ruled. His allies sent anyone who opposed them to jail.

Biden’s managers’ strategy coincides with Marxist polarization. Everyone has the right to whatever ideology they choose. No ideology can destroy us or turn us into a dictatorship without violating the law. Official criminality is our problem. We must stop it regardless of politics before it destroys our constitutional republic.