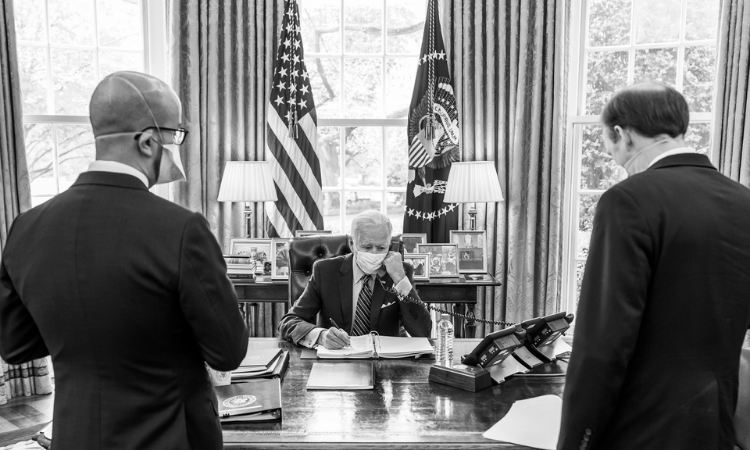 Guatemalan newspaper La Hora and Joe Biden’s Western Hemisphere director have created a phony controversy about Guatemalan Attorney General María Consuelo Porras’s October 21 interview with the Impunity Observer. The fake news began with an erroneous tweet from La Hora and a bamboozling tweet from Juan Gonzalez, who is also a special assistant to Joe Biden. La Hora published two reports, one that attempted to demean Porras and another that highlighted Gonzalez’s confusing statement.

La Hora’s and Gonzalez’s purpose appears to have been to create a distraction away from information showing State Department (DOS) duplicity and obstruction of justice in Guatemala. Porras twice offered through diplomatic channels to clarify the reasons for firing prosecutor Juan Francisco Sandoval. DOS ignored the offers and kept attacking Porras.

Porras told the Impunity Observer: “It is not the US government but the Department of State that is trying to obstruct criminal justice.” La Hora’s tweet twisted Porras’s words and said she indicated “that the State Department is independent from the government of Joe Biden.”

Gonzalez tweeted that DOS speaks for Biden and that Ambassador William Popp represents the president. La Hora issued a report about Gonzalez’s tweet and highlighted Sandoval’s firing as having provoked the controversy with Porras.

Porras faces a highly unusual circumstance, possibly unprecedented in US history. One part of an administration (DOS) is attacking a foreign official while other parts of the same administration are praising that official. Porras merely noted that the entire US federal government is not unified in impeding her work in Guatemala. What followed from La Hora and Gonzalez were word games and a straw-man misrepresentation.

DOS sanctioned Porras on September 20, 2021, by putting her on the so-called Engel list of “significantly corrupt” people, which bars her from entering the United States. Meanwhile, the Impunity Observer cited an award and praise for Porras from the US attorney for the eastern district of Texas, the Justice Department (DOJ), and the Drug Enforcement Administration.

Porras is correct: the US government has spoken with two contradictory voices. Porras’s US counterpart, DOJ, praised her and still works with her while DOS, not her counterpart, has attacked her and stopped working with her. Biden presides over both departments, and only he can clarify what the US position is regarding Porras, which he has not done.

This contradiction creates a problem for Gonzalez. He was a special advisor to former Vice President Biden and in 2016 became deputy assistant secretary of state for Western Hemisphere affairs. He remained in the post during the Trump administration.

I had a relaxed personal conversation with Gonzalez’s immediate superior, Kim Breier, in 2019. I told her the Constitutional Court had issued a series of illegal rulings damaging to Guatemala and the United States. Breier said she had information the court was doing an excellent job.

Knowing the court’s criminal rulings are in the public domain, I was stunned. After seeing Gonzalez at work with Guatemala this year, I now realize he was one of the leaders undermining Trump. Gonzalez continued the harmful policy Biden had implemented as vice president that led to the illegal rulings.

On January 29, nine days after Biden moved into the White House, Gonzalez gave an interview with La Hora. Gonzalez revealed himself as an ideological partisan who supports criminality to impose his agenda while calling anyone who opposes it corrupt. La Hora did not challenge Gonzalez and seemed to share his agenda. This coincides with La Hora and Gonzalez now working together against Porras.

Biden charged Kamala Harris with mitigating the root causes of migration from Guatemala and its Central American neighbors. Gonzalez was with Harris when she met at the White House with former Constitutional Court magistrate Gloria Porras and former prosecutors general Claudia Paz y Paz and Thelma Aldana.

These three former officials all committed crimes in furtherance of Gonzalez’s agenda. Gonzalez was with Harris for her virtual and physical meetings with Guatemalans. Gonzalez is clearly in charge of US policy in Guatemala. Neither Biden nor Harris know more than a little about Guatemala and depend on Gonzalez, giving him the power to implement the criminal agenda.

Gonzalez wants Porras out while the justice and security parts of the US government are happy with her. The former is politics; the latter is normal government activity. For Gonzalez to get Biden to publicly take his side, Biden would have to sacrifice genuine national-security needs, which Porras helps with.

If Biden were to side with DOS, it would draw more attention to Gonzalez’s perfidy. DOS cannot afford scrutiny of its criticism of Porras regarding Sandoval.

Sandoval’s criminality is well known in Guatemala. He illegally released Odebrecht, costing Guatemala an opportunity to recover $384 million. He conspired with Vladimir Putin’s henchmen against the Bitkov family, a case well known by US Senators and congressmen.  Sandoval has been accused of several other crimes and has an outstanding warrant for his arrest.

Even worse for DOS is having ignored Porras’s two attempts to clarify for them her reasons for firing Sandoval. We can assume Porras has more information than the damaging information publicly available.

If DOS accepts the information, it will have undeniable formal proof of Sandoval’s crimes. This could lead to exposure of the rest of the judges and prosecutors who committed crimes for the DOS agenda. It could also lead to the possibility of US officials having to answer to US authorities for their actions.

The entire DOS could come under congressional and press scrutiny if the United States adheres to the rule of law. DOS criminality in Guatemala could lead to a general review of the federal bureaucracy. The benefits to the United States from a complete examination of its officials’ actions in Guatemala would be a great help to both countries.