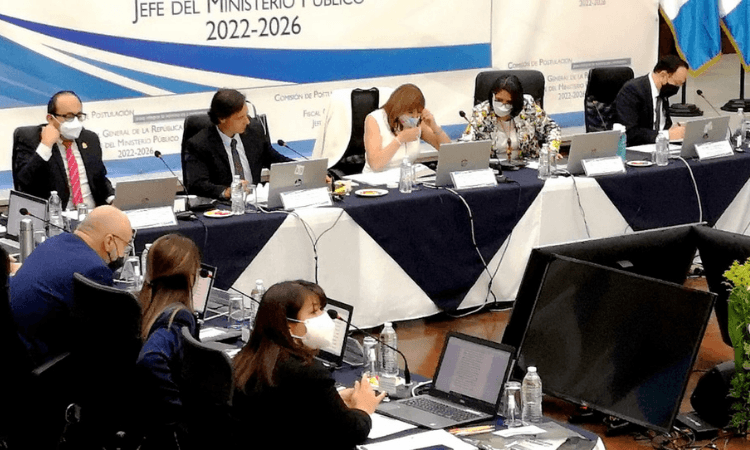 DOS’s open meddling in Guatemala’s internal affairs is to regain control of the justice system. (@guatevisible)

The US embassy in Guatemala is warning its citizens that it has received reports that the Peasant Development Committee (Codeca) will conduct “peaceful” demonstrations today and tomorrow that “may block traffic.” With shades of CNN’s “fiery but mostly peaceful protests,” the embassy calls a flagrant crime peaceful.

Codeca has received US funding, and it faces numerous criminal complaints. The organization’s theft of electricity is well known in Guatemala and estimated at $32 million per year. The embassy does not share that Codeca is part of its local infrastructure. The embassy shares responsibility for the actions it warns its citizens about.

Codeca blocked roads in late July 2021 demanding the resignation of President Alejandro Giammattei and Prosecutor General Consuelo Porras. This was a reaction to the latter having fired former prosecutor Juan Francisco Sandoval. From this history, one can infer the current actions the embassy warns about are related to Porras’s inclusion on the list of six finalists for prosecutor general sent to Giammattei. The Constitutional Court had ordered the commission to complete its list based on merit as the law provides.

The US State Department (DOS) had sanctioned Porras in September by placing her on the Engel List in reaction to Sandoval’s firing. Since then, DOS has campaigned against Porras’s reappointment. The embassy has threatened nominating commissioners with canceling their US visas if they vote for Porras. The foreign minister has twice chastised the embassy for intervening in the prosecutor-general appointment process.

DOS meddling in the process violates the Vienna Convention on Diplomatic Relations and the intent of the US Congress when it passed the United States-Northern Triangle Enhanced Engagement Law that created the Engel List. A stated objective of the law is “implementing transparent, merit-based selection processes for prosecutors and judges.”

DOS is responsible for corrupting the process and undermining merit in selection. Porras received the commission’s highest evaluation of all candidates. Despite this, seven commissioners violated the law to keep her off the list of six.

While the process was taking place, Secretary of State Antony Blinken was in Panama with Sandoval to talk about fighting corruption. Porras twice offered through diplomatic channels to clarify her reasons for firing Sandoval. DOS has ignored the offer. US Representative Chris Smith (R-NJ) asked Deputy Secretary of State Wendy Sherman on April 6, 2022, to receive Porras’s information and share it with Congress.

DOS has run a criminal conspiracy against Guatemala since 2010. This reached its peak in 2016–2018 when DOS controlled the Constitutional Court and the Prosecutor General Office. The embassy’s corrupt actors have persecuted political opponents without evidence and in violation of law and protected groups such as Codeca from prosecution despite their many crimes.

Having seen the disastrous results, Guatemala’s authorities resisted DOS pressure to appoint its agents to the Constitutional Court last year. After that, DOS openly took the lead and applied the Engel List against DOS political targets, including Porras.

Porras has begun to bring charges against prosecutors and judges when there is evidence. In Orwellian fashion, DOS has characterized her actions as persecution of anti-corruption champions.

DOS’s open meddling in Guatemala’s internal affairs is to regain control of the justice system. DOS can then protect its favored corrupt actors and its own personnel from being exposed as criminals. Any DOS agent who becomes prosecutor general on May 15 will end prosecution of DOS’s corrupt actors and begin to file bogus charges against DOS’s political enemies, as happened before.

Marxist strategy since the Sao Paulo Forum in 1990 has been to infiltrate and control target countries’ justice systems. When Marxists do not have this or when they lose it, as is happening in Guatemala, they use violence as a political tool. This is the reason for the increase in Codeca’s and other NGOs’ criminal activity.

DOS and its media and NGO partners claim the corruption of the past has returned to control Guatemala. Such deceptive messaging will dramatically increase if Porras gets final selection and continues to prosecute corrupt DOS agents.

A second term for Porras could lead to exposure of corrupt DOS personnel in the United States. These actors know such exposure, amply supported by the public record, could lead to the end of their control of DOS policy and jail for some of them. Such a result would be healthy for the United States and Guatemala.