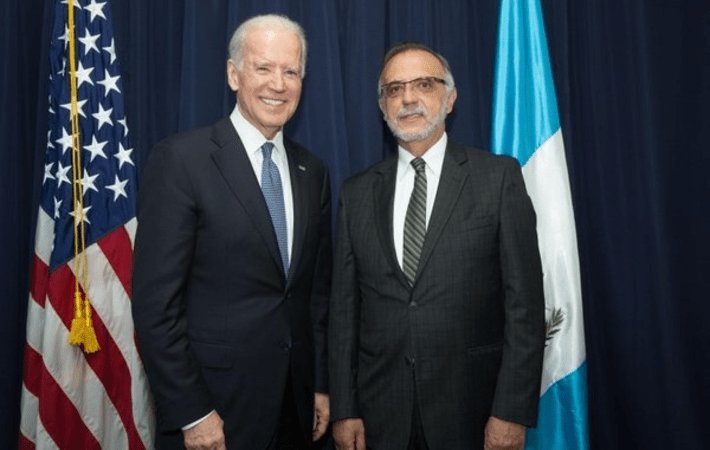 The UN Commission in Guatemala (CICIG), headed by Iván Velásquez Gómez (right), operates as an extension of the Obama administration. (@LatAmLENS)

Editor’s note: you can also read part one of this series.

All corruption, as Julius Caesar could have written, is divided into three parts. The first of these is the corruption itself, while the other two are the possible ways of redressing it.

The first way is the slow process of law or individual conscience. The second, on its face, is much more appealing: a promise to wash the whole world clean; to create a world in which the act of corruption, or any other shameful act, is inconceivable.

That is the radical path. All it requires is to get rid of the flawed and sordid world we now have. But the radical way is profoundly nihilistic; it craves destruction and cares little for affirmative change.

For nearly two-thirds of a century, the republic of Guatemala has fought against a radical project of reform. But the threat of radical change has never been more present in the country than during the last seven years.

In 2010, the CICIG — the so-called anti-corruption commission of the United Nations — arranged for an attorney general, Conrado Reyes, to be unseated before he had served even a month in office. The reason, as stated by the country’s highest judicial authority, was that Reyes “may have been influenced by organized crime.”

The constitutional court pronounced that laughable phrase after US Ambassador Stephen McFarland had personally lobbied its members to get rid of the attorney general.

Reyes’s replacement was Claudia Paz y Paz, who worked very smoothly with the CICIG and the Barack Obama administration before her term ended three and a half years later. During her tenure, she facilitated the spread of radical militias that have become a law unto themselves throughout much of Guatemala’s countryside.

When Paz y Paz left office, the radical project of which she was the most visible exponent went deeper and wider. The real exponents of radical subversion, it seemed, were only starting to show themselves.

One of these was the renegade UN agency, the CICIG, which holds a position of near-total power in the Guatemalan government while answering legally to nobody. But the CICIG did have a constituency of one, which made all the difference.

Likewise, the three ambassadors who have served in Guatemala since 2009 — McFarland, Arnold Chacón, and Todd Robinson — have committed multiple violations of the Vienna conventions on diplomatic relations; as have their bosses, Hillary Clinton and John Kerry.

Whatever one thinks of them, those are people of maturity and experience. By themselves, they are unlikely to have behaved in such a profligate manner. But each of them has answered to the same constituency of one that the CICIG has been serving: President Obama.

The speed and consistency with which the US embassy has met the needs of the guerrilla party — the removal of Conrado Reyes, the appointment and support of Claudia Paz y Paz, the backing for the Justice Ministry’s illegalities, for the ludicrous prosecution of José Efraín Ríos Montt, and most recently the removal of Óscar Platero from civilian intelligence — indicate a high-level executive connection between radicals in Guatemala and the presidential authority in Washington, which quickly generates orders to the embassy.

The second half of 2015, all by itself, saw an expansion of the Obama radical project that was breathtaking in its scope, and frightening in the degree to which it approached success. In the name of anti-corruption, the Obama administration and its UN handmaiden literally cut off the head of the Guatemalan republic by engineering the removal and imprisonment of the president and vice president.

It came ever-so-close to its real objective of canceling the presidential election, and all of it happened in view of US media whose attention to the events was ill-focused and cursory in the extreme.

It was only the most basic sense of self-preservation, on the part of Guatemala’s ordinary people, that made a rousing success of the elections and promoted to power a political outsider whom the United States is now working to undermine.

If you follow the interventions in Guatemala and compare them with Obama’s domestic maneuvering, you see the same patterns in both places. The major difference is that the Obama spin machine has not had to cover the president’s tracks in Guatemala because hardly anyone in the United States has been looking.

Since people tend to act more forthrightly when they do not feel they are being observed, a very strong case can be made that Obama’s actions in Guatemala — in their frankness and flagrancy — give the most revealing possible view of his administration. A thorough congressional investigation of the Obama policy in Guatemala would reveal many layers of corruption — if only Congress would investigate.

Considering the multiple scandals under Obama — Benghazi, Fast and Furious, the misuse of the IRS against political opponents, the crimes of Obamacare — that have not been investigated, or have been obscured by political manipulation, the likelihood of an effective inquiry regarding Guatemala is next to nil.

The Guatemala matter holds a strong point of interest for those who think they correctly understand Obama’s intentions in dealing with the Islamic State. Obama’s actions in Guatemala have nothing weak or indecisive about them. The policy expresses adamant support for a radical falange that’s working to undermine a constitutional republic and replace it with its own leaders.

With his completely free hand, Obama is pushing Guatemala in the direction of the Castros, with whom the president has reconciled, and to whom he has all but said: “You were right, and the 10 American presidents before me were wrong.”

The pro-Castro sentiment in Washington is now massive and constant. Any critique of the Castro regime is met with an automatic reply: “Castro is the man who overthrew Batista!”

There you have the argument for radical change in a nutshell. After 60 years, people still remember Fulgencio Batista’s racket with parking meters, while no one seems to notice that Castro has stolen the entire nation of Cuba and turned it into a family plantation.

That’s also the fate which Obama, the CICIG, and the homegrown radicals have been designing for Guatemala. They want their great-great-grandchildren, 60 years from now, to remember Pérez and Baldetti for customs bribery, while Guatemala is smothered by an olive-green tyranny.

For Obama, the US embassy, and the CICIG, all that remains is to banish a grossly inconvenient fact: the presidency of Jimmy Morales and whatever chance of real change it might contain.

Jimmy, make no mistake. They are coming for you. They obey no scruples; they possess no distractions. They have Fidel’s ruthlessness, without his social graces.

Listen, Jimmy. Those people have no room for your good nature, your humor, your bonhomie. So keep your claws sharp and be, like the US Coast Guard, always ready.