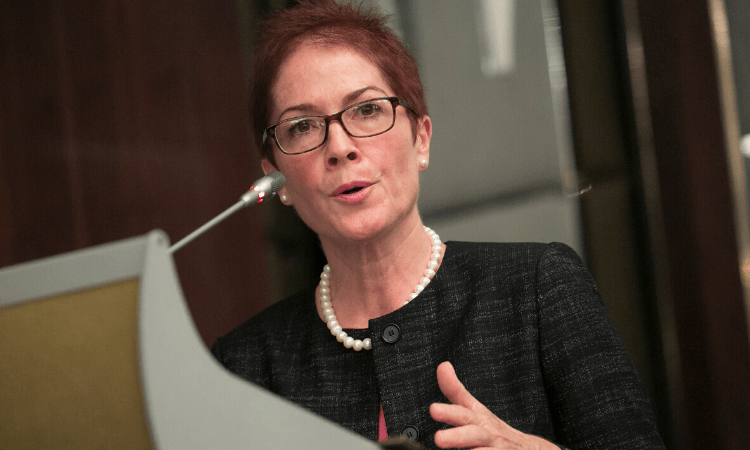 By choosing Ukraine as their vehicle for impeachment, Democrats are exposing their allies in the deep state who have been working against their commander in chief and the Constitution.

Their media allies’ coverage carries an implicit and erroneous assumption: State Department personnel are nonpartisan bureaucrats who selflessly serve their country. In Ukraine and Guatemala, the pattern holds of corrupt meddling abroad, contrary to the interests of US constituents and wishes of the Trump administration.

Before the House’s impeachment tribunal, speaking of her service in Ukraine, Ambassador Marie Yovanovitch denied having given that country’s chief prosecutor a list of people to avoid prosecuting. But the prosecutor affirmed the opposite, in advance of the ambassador’s statement and afterward as well.

Yovanovitch also asserted that ambassadors should not interfere in the internal affairs of host countries. But a do-not-prosecute list is exactly that kind of interference.

A report by investigative journalist John Solomon confirmed the claim by Ukraine’s prosecutor that the US embassy had pressed him to drop certain cases, including those of a law enforcement official and a legislator whose prosecution the embassy claimed could “unravel a key component of our anti-corruption cooperation.”

Two persons whom Ambassador Yovanovitch apparently protected were later cited by a Ukrainian court for interfering in the 2016 US election against candidate Trump.

In Ukraine, it looks as if fighting corruption was the State Department’s cover for illegal meddling in a host country’s internal affairs. It also seems the State Department was trying to suppress information about certain Ukrainian persons who tried to meddle in our elections. State Department personnel involved in those matters are now witnesses for the Democrats at their impeachment tribunal.

As compelling as that story is, another and closely related one is being missed. With a hefty assist from Vice President Joe Biden, the US State Department committed subversion against Guatemala.

On an identical pretext of fighting corruption, the Obama administration delivered much of Guatemala to the control of Marxist militias. Biden was the chief implementer of this policy, which brought ruin to many Guatemalan communities and directly fed a mass migration to the United States.

In 2014 and 2015, Biden made three trips to Guatemala to pressure President Otto Pérez Molina to extend the mandate of the International Commission Against Impunity in Guatemala (CICIG). This UN-created agency claimed to fight corruption, but in reality it became the US embassy’s battering ram. The CICIG reported to nobody, and its personnel’s diplomatic immunity gave them license to commit any crime in furtherance of the embassy’s socialist agenda.

Many Guatemalans were sick of the commission and wanted it removed. Regardless, Biden forced Guatemala’s hand. His carrot in the situation was the US aid package for Guatemala and other countries in Central America.

Pérez implored Biden not to make a public statement about the CICIG. Biden, however, disregarded the leader of a sovereign state and announced to the press: “The CICIG is staying, period.”

With its mandate extended, the CICIG consolidated its control of the Justice Ministry, and US Ambassador Todd Robinson bullied the nation’s legislators into reappointing a guerrilla judge to the country’s highest court, thereby ensuring that the guerrilla faction could unilaterally decide what was law in Guatemala and what was not.

That result had been brought about by the very same official, Biden, who denounces Trump for wielding influence with the president of Ukraine.

In 2015, Guatemala’s former first lady Sandra Torres—a former guerrilla and former vice president of the Socialist International—was favored to win the presidential election. Robinson and the CICIG supported her.

But Guatemala’s voters did not allow themselves to be ignored. They gave the victory to an underdog candidate, former TV comedian Jimmy Morales.

After a lengthy wrangle, Morales found the means to secure the removal of the CICIG from Guatemala. The CICIG took up the position of an agency-in-exile and waited for the result of the 2019 election, which was Sandra Torres’s second attempt for the presidency. Torres pledged to bring back the CICIG, and US ambassador Luis Arreaga did much to rig the election in her favor.

Three days before the election’s final round, US House Speaker Nancy Pelosi visited Guatemala with a delegation of Congressional Democrats. In a clear declaration of support for Torres arranged by Arreaga, Democrats’ delegation posed for photos with two of the country’s most well-known guerrilla judges.

But again, Guatemala’s voters frustrated the best designs of Pelosi, the Democrats, the CICIG, and the State Department bureaucracy. The new president will be Alejandro Giammattei, a former official who himself was once prosecuted by the CICIG.

The moral of recent US political interventions in Guatemala and Ukraine is that State Department bureaucrats routinely act as if they know what’s best for the countries in which they’re posted—as if their higher knowledge and purpose justifies violating international law to implement the solutions they prefer.

Those bureaucrats, along with their soulmates in the media and the Democratic Party, behave as if they should control foreign policy instead of the duly elected president. This disregard for the US Constitution and of popular sovereignty is on full display in the impeachment proceedings against Trump.